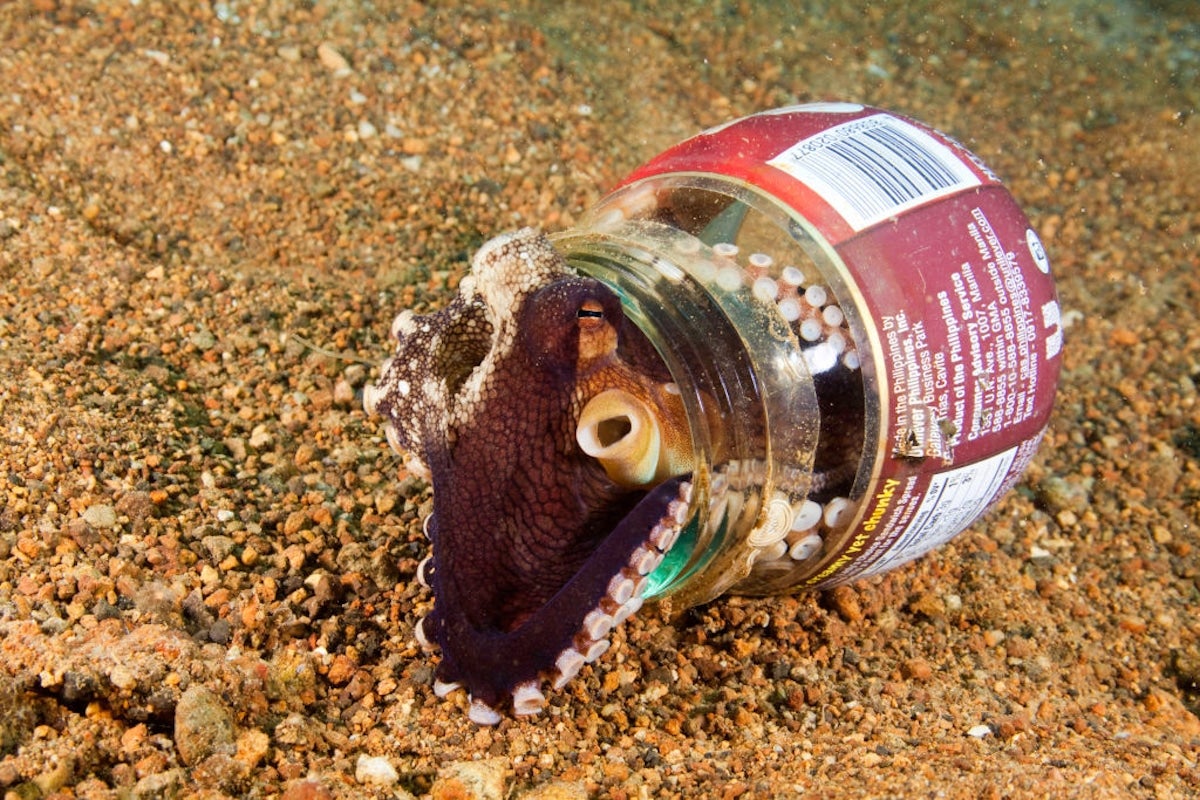 It turns out that humanity’s trash may be an octopus’s treasure.

A new study published in Marine Pollution Bulletin last month looked at a range of underwater photographs that show octopuses interacting with litter that had settled on the seafloor.

“The deep-sea records were extremely interesting, because even at great depths these animals are interacting with the litter,” research supervisor professor Maira Proietti at the Federal University of Rio Grande in Brazil told The Guardian.

Deep-sea octopuses have been observed taking shelter in human-made items for decades, the researchers explained. However, the Brazilian and Italian team wanted to understand more about these interactions. To this end, they looked at a total of 261 photographs taken by citizen scientists and identified 24 species of octopus interacting with marine debris.

The most common interaction documented by the photographs was octopuses using glass as an alternative shelter. Indeed, 41.6 percent of the interactions involved glass, while 24.7 percent involved plastic. In addition to using the items as shelter, the scientists also saw the octopuses carrying plastic items around to camouflage themselves while “stilt-walking,” or walking on two tentacles, The Guardian reported.

The species most commonly represented in the photographs was Amphioctopus marginatus. Also known as the veined octopus, this marine animal has a habit of burying itself in sand and using clam and coconut shells to protect itself, according to the Australian Museum. It is found throughout the tropical Indian Ocean as well as in the Pacific near Australia, New Guinea and Southern Japan. In general, a higher percentage of the images came from Asia than any other region.

While the images show the adaptability and ingenuity of octopuses, researchers aren’t yet sure of the true implications of the octopuses’ use of marine litter.

“Despite any possible positive effects, the use of litter as shelter could have negative implications,” the study authors wrote.

For instance, sheltering or laying eggs in tires or on batteries or plastic could expose the animals to heavy metals or toxic chemicals, Proietti told The Guardian.

For example, one 2015 study found that cadmium, which has increased in the marine environment due to human activity, can inhibit the growth and increase the mortality rate of common octopuses.

The use of artificial items might also indicate negative changes in the environment.

“While these interactions could seem positive for the animals because they are lacking natural shelters such as seashells, it is not a good thing to think that the animals may be using litter as shelter because the seashells are gone,” Proietti told The Guardian.

In general, ocean plastic is considered a threat to marine life because larger items can entangle animals or block their digestive tracts when they mistake it for food. A total of 267 species have been impacted by marine plastic pollution.