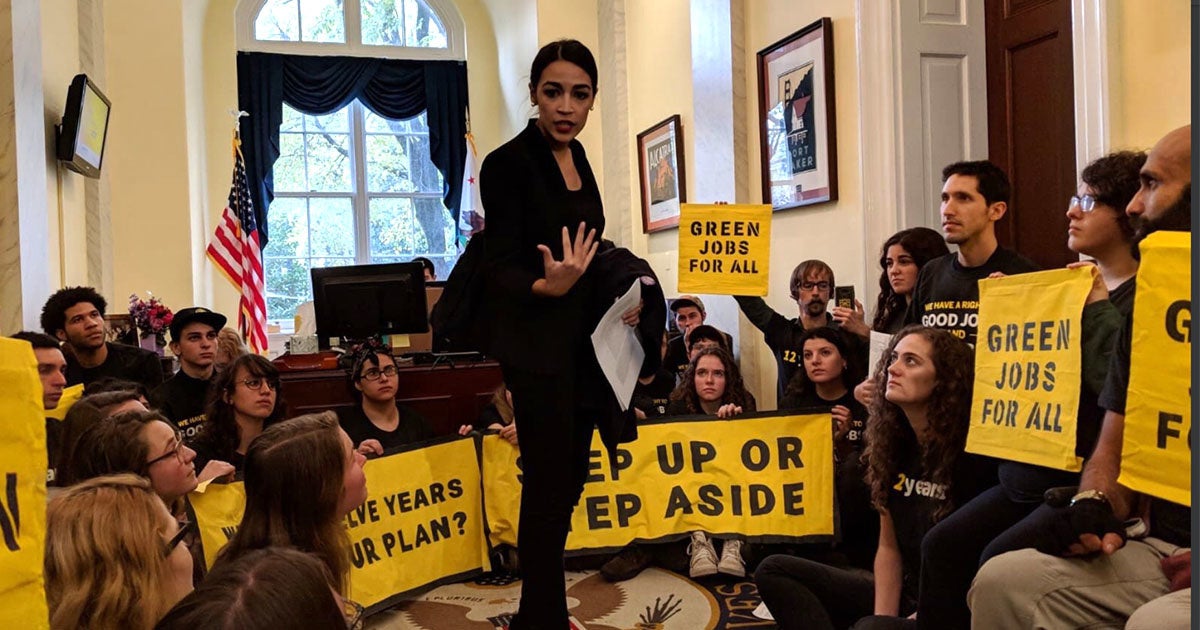 One of the most ambitious environmental ideas to gain popularity during the midterm elections was the idea of a Green New Deal—a massive national mobilization to transition the U.S. economy away from fossil fuels and towards renewable energy while creating green jobs and infrastructure.

Only four newly-elected Democratic Congresspeople endorsed the idea in their campaigns, including upstart progressive Alexandria Ocasio-Cortez, but climate activists are building a movement to make it a legislative priority. To that end, more than 200 protesters, including Ocasio-Cortez herself, staged a sit-in at Democratic House Leader Nancy Pelosi’s office Tuesday calling on her to support the measure, Politico reported.

“This morning 100s of young people came together to ask us as elected officials to act urgently to draft a Green New Deal that gets us to 100% renewable energy ASAP,” Ocasio-Cortez tweeted. “They asked me to join them, and I did. We can embrace the energy of activism to move our party’s goals forward.”

In a statement, Pelosi asked that Capital Police allow demonstrators “to continue to organize and participate in our democracy,” but activists tweeted that around 50 were arrested outside her office and Capitol Police confirmed the number of arrests as 51, Politico reported.

The action was organized by two groups: The Sunrise Movement, which describes itself as “building an army of young people to stop climate change” and Justice Democrats, which works to diminish the influence of large corporations on the party. Their actions come with a true sense of urgency. On its website, the Sunrise Movement cites the Intergovernmental Panel on Climate Change (IPCC) report that says we have 12 years to radically reduce greenhouse gas emissions in order to limit warming to 1.5 degrees Celsius above pre-industrial levels. They are also young people worried about what this means for their future.

“They offer us a death sentence. We demand a #GreenNewDeal,” the activists tweeted as they announced their action.

200 people signing their power in the halls of Congress. Join our movement with your voice https://t.co/y6pz1MNYDU pic.twitter.com/MAxhynvmgZ

Pelosi herself tweeted support for the protesters, but came up short of endorsing a Green New Deal.

“The climate crisis threatens the futures of communities nationwide, and I strongly support reinstating the select committee to address the crisis,,” Pelosi tweeted, referencing an idea she had floated after her party retook the House last week.

Deeply inspired by the young activists & advocates leading the way on confronting climate change. The climate crisis threatens the futures of communities nationwide, and I strongly support reinstating the select committee to address the crisis. https://t.co/rjVJYSJraf

Ocasio-Cortez responded with a very specific vision for what that committee should do. Instead of just discussing climate change, it should be empowered to draft a Green New Deal plan by 2020 and be staffed with officials who do not take money from fossil fuel companies.

We are working to build on the progress that’s being made.

The added teeth that these young people are demanding:
1. Committee should have power to draft legislation (select committees can, but mandate must be given)
2. No appointed members that accept fossil fuel contributions https://t.co/KG0ko5ufFx

Ocasio-Cortez and the Sunrise Movement are circulating a resolution to that end among House Democrats and asking them to endorse it. So far Representatives Rashida Tlaib, Ro Khanna and Deb Haaland, one of the first two Native American women elected to Congress, have signed on.

If you want to add your name to the push to make a Green New Deal a major priority for the House Democrats, the Sunrise Movement is also circulating a petition.