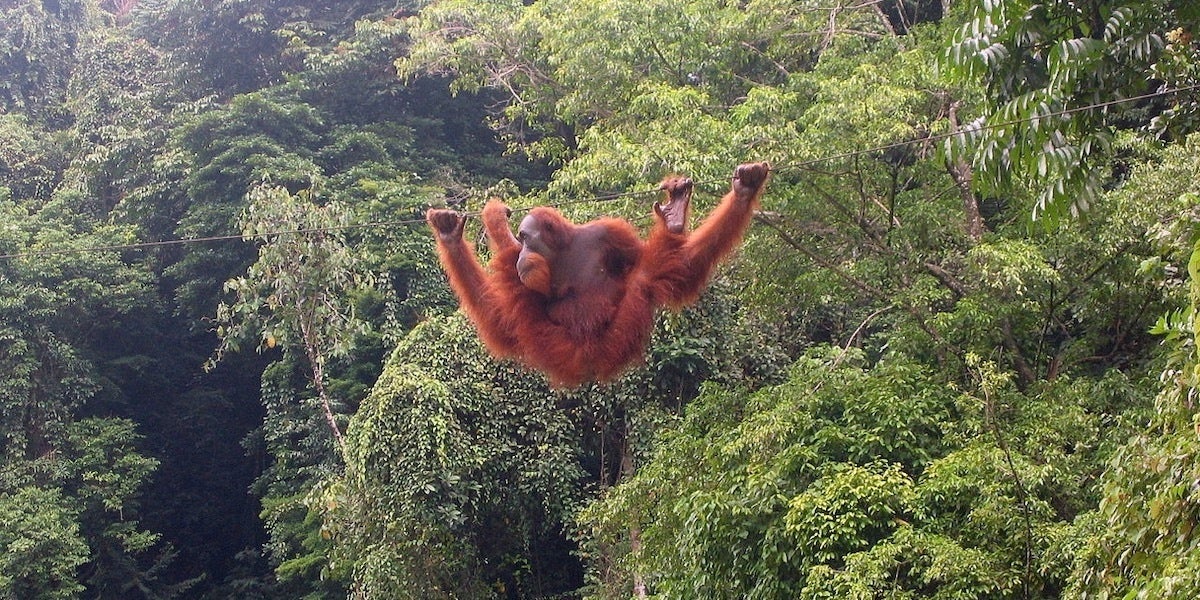 The Norwegian parliament voted this week to make Norway the world’s first country to bar its
biofuel industry from importing deforestation-linked palm oil starting in 2020, The Independent reported.

Environmentalists celebrated the move as a victory for
rainforests, the climate and endangered species such as orangutans that have lost their habitats due to palm oil production in Indonesia and Malaysia. It also sets a major precedent for other nations.

“The Norwegian parliament’s decision sets an important example to other countries and underlines the need for a serious reform of the world’s palm oil industry,” said Nils Hermann Ranum of the
Rainforest Foundation Norway (RFN) in a press release emailed to EcoWatch.

A 2017 report commissioned by RFN found that palm oil-based biofuel is worse for the climate than fossil fuels. The report, authored by low carbon fuels policy expert Chris Malins, concludes: “There is a large body of evidence that because of indirect land use change, palm oil biodiesel is worse for the climate than the fossil fuel it replaces—perhaps several times worse.”

Norway’s consumption of palm oil-based fuels hit all-time high in 2017, according to RFN. The country consumed 317 million liters of palm-oil based biodiesel, representing 10 per cent of its overall diesel consumption, the group said.

As the #COP24 #climatechange summit opened, Norway made a bold move. #Biofuels based on high #deforestation risk feedstocks such as #palmoil will be excluded by 2020. This is a victory in the fight for the #rainforest and the climate, says @RainforestNORW https://t.co/R6kKAiCzlg pic.twitter.com/RIbmKEqAtk

Last year, a majority of the Norwegian parliament actually voted to stop the government from purchasing palm oil-based fuels.

However, the parliamentary decision was never fully implemented, as the government opted instead to rely on voluntary measures, The Independent noted.

The vote that passed Monday is thought to be stronger and was supported by the majority of the government, according to The Independent. The resolution calls on the government “to formulate a comprehensive proposal for policies and taxes in the biofuels policy in order to exclude biofuels with high deforestation risk.”

The Indonesian government as well the country’s palm oil producers have already expressed concern about Norway’s vote this week.

“Although the impact will not be significant (on our exports), that will become a bad example for other countries,” Fadhil Hasan, the director for foreign affairs of the Indonesian Palm Oil Producers Association, told
The Straits Times.

Oke Nurwan, director-general for foreign trade in Indonesia’s Trade Ministry, worried that other countries may follow in Norway’s footsteps.

“The policy will certainly amplify the negative impression about palm oil products,” he told the publication.

Here is the full text of the resolution that passed in Oslo this week, according to RFN’s translation:

“Stortinget [the Norwegian Parliament] requests that the Government formulate a comprehensive proposal for measures and taxes in the biofuels policy in order to exclude biofuels with high deforestation risk both within and outside the blending mandate. These framework conditions shall be put forward in conjunction with the national budget for 2020, and shall be introduced from 1 January 2020.”