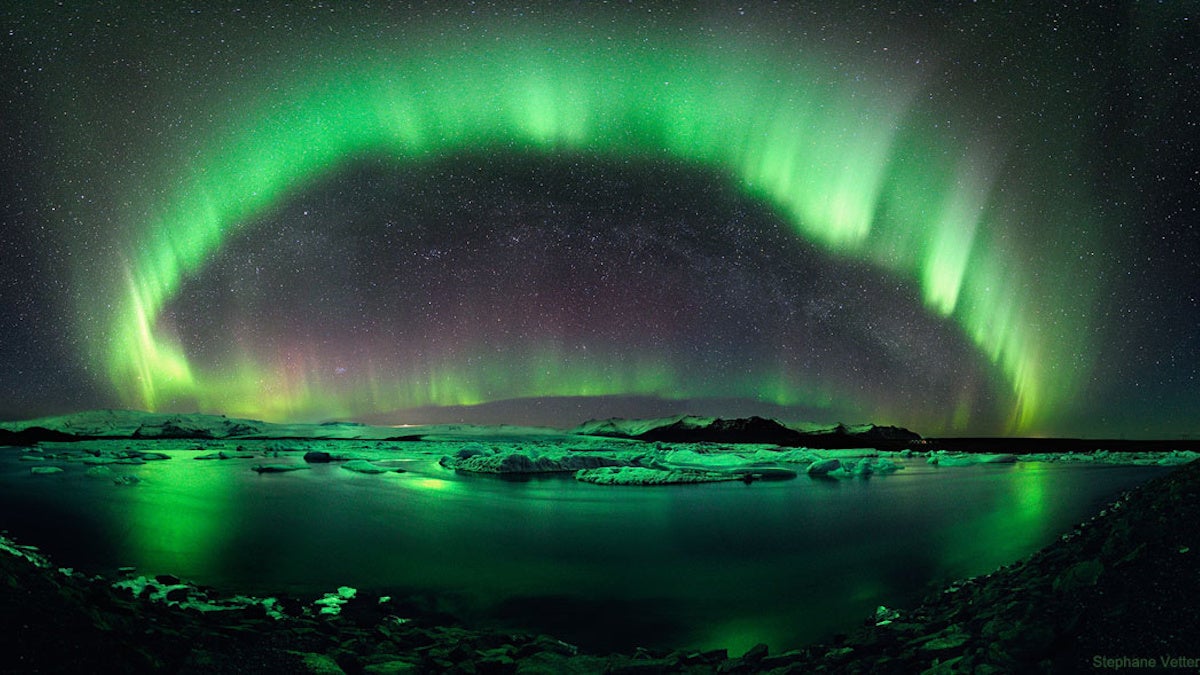 This image was taken in 2011 over Jökulsárlón, the largest glacial lake in Iceland. The photographer combined six exposures to capture two green auroral rings and their reflections off the lake. NASA / Stephane Vetter / TWAN / Nuits sacrees

2020 will be the year of Mars. The red planet will approach Earth in early October to within 62 million kilometers. Four space agencies are set to take advantage of this close encounter and send spacecraft to Mars. The European Space Agency (ESA) will launch its ExoMars rover on a Russian Proton rocket from the Baikonur cosmodrome. ExoMars is set to land on the surface, dig into the soil and look for traces of past life. They will be looking for possible living microbes about half a meter below the Martian surface. Above it, harmful cosmic radiation makes life as we know it impossible.

Next in line is NASA, which is preparing Mars 2020, a rover that will land on the surface as well. It is supposed to look for organic molecules, chemical stuff that contains carbon. It will also try to get the oxygen out of the carbon dioxide in the Martian atmosphere. This could be critical proof for future manned missions.

Most exciting: Mars 2020 is slated to collect and store samples from the Martian soil for a mission – yet to be planned in detail – that will bring them back to Earth about ten years from now.

Two New Players in the Mars Game: China and UAE

After its successful lunar missions, China is aiming for Mars too. It looks to begin a mission consisting of an orbiter that will fly around Mars for years and a lander with a rover. If their missions succeed, China and Europe will join Russia and the U.S. in landing a spacecraft safely on Mars.

The United Arab Emirates are also planing their first interplanetary mission. The Hope spacecraft will launch with a Japanese rocket and is supposed to orbit the red planet. UAE is looking to gain experience in deep space, and as the name suggests, the team hopes to successfully navigate the spacecraft into Mars’ orbit.

China’s Next Step in Lunar Exploration

China will most likely launch its Chang’e 5 mission some time in 2020. Early last year, Chang’e 4 landed on the far side of the moon, a feat no other space nation has achieved so far. Chang’e 5 will land on the moon’s near side, analyze surface material and bring samples back to Earth. If China manages to do that, for the first time since the mid-70s, samples from the Moon will make it into labs on Earth. Back then, three Soviet Luna missions collected lunar dust.

German Technology on Its Way to the Moon

If everything goes extremely smoothly, the Orion spaceship will launch its maiden voyage in late 2020. Orion, built on the basis of a unique cooperation between NASA and ESA by U.S. and European companies, will spend about four weeks in space. The goal of this Artemis-1 mission, the first within the new lunar exploration framework of the U.S., is to be in lunar orbit for some days and check out all systems.

However, on this first trip, no humans will be on board. But two dummies from the German Aerospace Center DLR equipped with thousands of sensors are going to collect information about the flight conditions. The Orion spaceship consists of two parts: The crew capsule is provided by NASA. The service module with engines, navigation and attitude control systems, fuel, water and air are supplied by Airbus in Bremen, Germany.

The Moon is an exciting body in terms of space flight activities. It is a great sight in the sky as well. However, the lunar eclipses of 2020 won’t be much for the naked eye. Four times the Moon will cross the Earth’s penumbra. During a penumbral eclipse, however, the Moon is still a full circle. But some areas are slightly dimmer than others and appear in a more brown or gray color.

2020 is a much better year in terms of solar eclipses. On June 21, less than a day after the summer solstice in the northern hemisphere, there is an annular solar eclipse. The Moon will be in front of the Sun, but it won’t be big enough to block the sunlight entirely. It will be akin to a 1-Euro-coin sitting on top of a 2-Euro-coin.

Observers in a long but very narrow zone will experience the annular eclipse: This zone extends for more than 14.000 kilometers, but it is only about 20 kilometers wide. It passes through Congo, South Sudan, Ethiopia, Eritrea, Yemen, Saudi-Arabia, Oman, Pakistan, Northern India, Southern China, Taiwan all the way into the Pacific Ocean to an area south of Guam.

Globally, the eclipse starts at 03:46 and ends at 09:34 UTC. On a given location, the eclipse lasts at best slightly more than two hours. Observers in most parts of Africa and Asia as well as in the northernmost regions of Australia will experience a partial eclipse.

Black Sun Over Chile and Argentina

The 2020 highlight in the sky will be the total solar eclipse on Dec. 14. Again, in a very long zone that is about 90 kilometers wide, the New Moon will block the Sun completely. For at best 2 minutes and 10 seconds, the day will turn into night.

During totality the brightest stars in the sky light up and the black lunar disk is surrounded by the bright and beautiful corona, the Sun’s atmosphere. Unfortunately the zone of totality runs almost exclusively over the Pacific and Atlantic Ocean.

Totality starts at 14:33 UTC in the South Pacific and it ends at 17:54 UTC off the Namibian coast. But eclipse chasers can count their lucky stars, because the greatest eclipse occurs over land. Between 16:00 and 16:25 UTC, the Moon’s shadow will cross the southern parts of Chile and Argentina. The partial phase of this eclipse is visible in most areas of the southern Pacific, South America, Antarctica, Namibia and South Africa.

Attention! Looking into the Sun without special eclipse filters (regular sun glasses are no protection!) is extremely dangerous. In the worst case, the observer can lose his or her eye sight.

On Feb. 5 the Solar Orbiter is scheduled to lift off from Cape Caneveral. This joint ESA/NASA mission is set to study the energetic particles constantly emitted by the Sun, to take pictures in X-ray, ultraviolet and visible light. It is set to study the Sun’s surface and atmosphere.

It will provide a unique viewing angle as its orbital inclination will increase to about 33 degrees against the Sun’s equator over the 10-year span of the mission. The Solar Orbiter will be in a unique position to observe the poles of the Sun, which are out of reach for telescopes on Earth. The spacecraft will get as close to the Sun as 42 million kilometers, well within the orbit of Mercury.

The Year of the Three Planets

Mars, the favorite object for space flight engineers in 2020, will be visible in the sky throughout the year. Until June, Mars shows up in the morning sky. By July it will rise before midnight and from September until December the bright reddish spot in the constellation Pisces is visible all night long. Jupiter, the biggest planet in the solar system, will be visible brilliantly from May until the end of the year.

On July 14, it is in its best position. Jupiter is in the constellation Sagittarius as well as the ring planet Saturn which is brightest on July 20. Jupiter and Saturn are the gems of the long winter nights in the southern hemisphere.

On Dec. 21, Jupiter gets very close to Saturn as the bigger and faster planet passes the slower ring planet. Such encounters of Saturn and Jupiter happen only once in 20 years!

Venus, our inner neighbor in the solar system, is a bright evening star until mid May. Then it will disappear and reemerge in mid June in the morning sky.

2020 could see a shift in paradigm for U.S. space flight activities. SpaceX and Boeing want to bring humans to the International Space Station and back to Earth. So far, both companies only deliver cargo. However, there have been significant delays in developing the Crew Dragon and the Starliner spaceships. If all goes well, the first manned flights of these capsules could occur in the second quarter of this year. For the first time since the shuttle fleet was retired in 2011, NASA astronauts would launch from US territory into space.

Forty years ago, on Christmas Eve 1979, Europe’s rocket Ariane took off for the very first time. Ariane has logged more than 250 flights since then. The current Ariane-5 is set to be phased out over the next years.

Late this year, Ariane-6 is scheduled to go on its maiden voyage into Earth’s orbit. The new version of Europe’s work horse for space activities is much cheaper, versatile and flexible, yet it’s equally powerful in terms of payload capacity as its predecessor.

ESA and the European industry are facing strong competition from new commercial players like SpaceX in the U.S. and were forced to come up with a newly developed rocket.

On April 24, the Hubble Space Telescope will be in orbit for 30 years. A car on Earth as old as Hubble is considered antique. But the space telescope is still in perfect shape, doing first class science and sending mesmerizing pictures of planets, nebulae, star clusters and galaxies to Earth, reaching out to billions of people.

Stargazers are looking forward to this year’s meteor showers. Last year, all three major showers were spoiled by the light of a full Moon. This year is different. While the Perseids in August will be slightly affected by the Moon, the Leonids in November and the Geminids in December will light up in a perfect dark sky. But remember: There can be a bright meteor in the sky at any time. Just look up – and be patient.