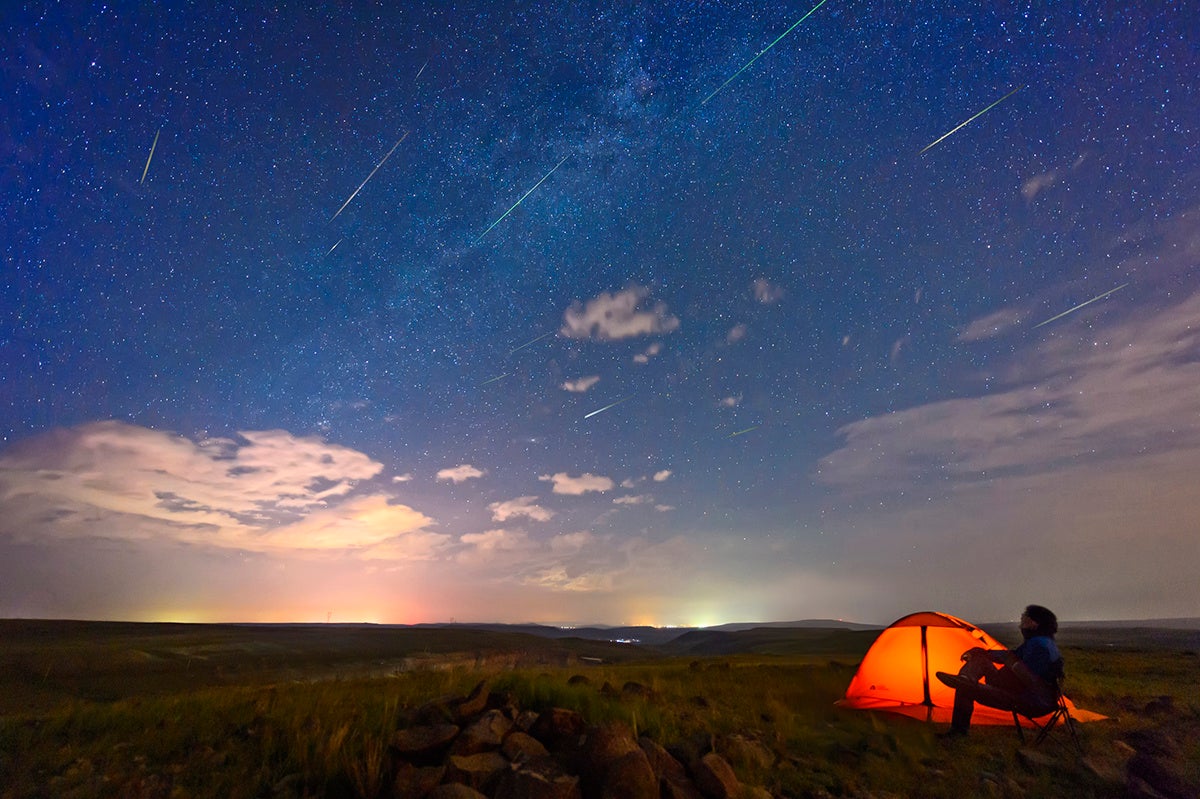 August is the time to sit back, relax and enjoy the free show overhead.

The Perseid meteor shower is one of the most prolific annual meteor showers and the only one that occurs in the summer. The Perseids can produce up to 100 meteors an hour at their peak, which is around Aug. 11/12. Skies will be nice and dark thanks to a new moon on Aug. 11, which will make it easier to see even the faintest streaks. Find a location away from trees, buildings and light pollution, and look up to catch the fast-moving meteors as they burn up upon contact with our atmosphere. These meteors come from the Great Comet of 1862, Comet 109P/Swift-Tuttle.

A sky full of planets continues to entertain us in August. The brightest and closest planet, Venus, drops low in the west and sets not long after sunset. Jupiter trails behind Venus in the southwest, setting four hours after sunset at the beginning of the month and disappearing more quickly by the end. Venus mingles with the moon on Aug. 13 and 14, and Jupiter gets a visit from the moon on Aug. 16 and 17.

Saturn is low in the south, floating before the stars of the Milky Way. The Ringed Planet lies in Sagittarius, close to some stunning star clusters and nebulae. The moon will come into the picture on Aug. 20, brightening the Milky Way environs, so try a couple days before or after this date if you want to hunt down deep-sky delights near Saturn.

Mars reached opposition in late July, one of its closest approaches to Earth in a number of years. The bright, reddish-orange color of the planet should still be unmistakable in the south-southeast. A planet-wide dust storm has been extinguishing our view of features of the Red Planet, but during calmer weather it’s possible to spy white wisps of polar caps and clouds on the Martian planet through backyard telescopes. The moon passes Mars on Aug. 22 and 23, and it hits full phase on Aug. 26 at 4:56 a.m. PDT. August’s full moon is sometimes called the Sturgeon Moon.

Get out your telescope or binoculars on Aug. 23 to catch the double shadow transit on Jupiter. The timing of the event will depend on your location, so start looking after it gets dark to see if the eclipse is already in progress or about to begin. The dark shadows of Io and Europa will pass in front of Jupiter over the course of more than an hour. The first shadow to enter onto Jupiter is Io’s, while the one that tags behind is Europa’s. Look for the four Galilean moons arrayed out to one side of the planet. Callisto is farthest away with Ganymede near it. Close in to Jupiter are Europa and then Io, which is the closest of all. If you are able to watch early enough, you’ll get to see Europa and then Io appear off the limb of the planet after they have passed in front of Jupiter.

A partial solar eclipse is on tap for August, but it can only be seen from northern Asia and Europe. The next eclipse that will be visible to viewers in the U.S. is a total lunar eclipse in January.

Chance at a Comet

It’s 4 a.m. in early August and you can’t sleep. What to do? Grab a pair of binoculars, go outside before the sun rises, and find the northeastern horizon. Look to see if the constellation Gemini has emerged above the horizon yet (actual time of rising depends on your location). If you aren’t familiar with Gemini and its bright “twin” stars, look for the better-known constellation of Orion rising in the east and then scan the horizon to the left (north) until you see the bright pair of stars, one above the other. From August 4 to 6, a brightening comet known as C/2017 S3 PanSTARRS will be traveling between the top star, Castor, to the bottom star, Pollux. If the comet increases in brightness as predicted, you won’t even need the binoculars to see it.

The comet will stay close to the horizon, reaching perihelion on Aug. 15, when it should be at its brightest. However, a surprise outburst in July, which gave it a quick brightening and greenish hue, may have knocked the stuffing out of its August showing. Unfortunately, mid-August is also when the comet is closest to the horizon and the rising sun, which might wash out your view. But if you’re awake, it’s worth taking a look. Perhaps it will have another surge as it gets to within just .21 AU from the sun, a final hurrah, before it most likely disintegrates.