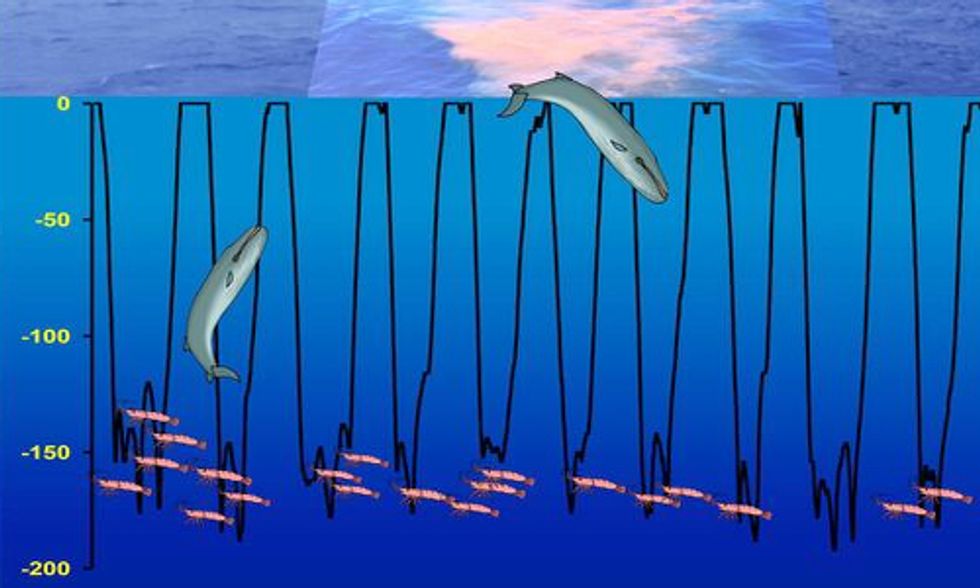 Baleen and sperm whales, known collectively as the great whales, include the largest animals in the history of life on Earth. Though large in size, whales have long been considered too rare to make much of a difference in the ocean, and the focus of much marine ecological research has been on smaller organisms, such as algae and planktonic animals. While these small organisms are essential to life in the sea, they are not the whole story. As great whales recover from centuries of overhunting, scientists are beginning to appreciate their roles as ecosystem engineers of the ocean.

A recent synthesis, published in Frontiers in Ecology and the Environment, evaluates decades of research on the ecological role of great whales. The authors, led by Joe Roman at the University of Vermont, suggest that the influence of these animals has been substantially undervalued because, until now, scientists have underestimated the degree to which the decline in whale population has altered marine ecosystems.

Commercial whaling dramatically reduced the abundance of great whales—by at least 66 percent and perhaps as high as 90 percent, according to some estimates—but recovery is possible, and potentially critical for ocean resiliency.

Among their many ecological functions, whales recycle nutrients and enhance primary productivity, locally and on a regional scale. Whales mix the water column, and after feeding at depth, release surface plumes of fecal material. This “whale pump” supplies iron and nitrogen—essentially fertilizers—to primary producers in the surface ocean. Further, the migrations of baleen whales between highly productive, high-latitude feeding and low-latitude calving grounds are among the longest annual movements of mammals. By fasting in these winter calving grounds near the equator, humpback whales, for example, release nitrogen in the form of urea into comparatively nutrient-poor areas—transporting nutrients nearly 10,000 kilometers on the “great whale conveyor belt.”

After feeding at depth, sperm whales off the coast of Sri Lanka return to the surface—and poop. This “whale pump” provides many nutrients, in the form of feces, to support plankton growth. It’s one of many examples of how whales maintain the health of oceans. Photo credit: Tony Wu

Sometimes, commercial fishermen have seen whales as competition. But this new paper summarizes a strong body of evidence that indicates the opposite can be true: whale recovery “could lead to higher rates of productivity in locations where whales aggregate to feed and give birth,” supporting more robust fisheries.

Whales, as one of the longer-lived species in marine systems, can ease the impact of perturbations in climate, predation and productivity. The continued recovery of great whales may help buffer marine ecosystems from destabilizing stresses and could lead to higher rates of productivity in locations where whales aggregate to feed and give birth.

And when they die, many whale carcasses sink to dark depths of the ocean—delivering massive pulses of organic material to a realm that is typically nutrient and energy impoverished. A 40-ton gray whale, for example, provides more than 2,000 times the background carbon flux that would typically rain down on the area underlying the carcass in an entire year.

“Whales appear to harbor a specialized suite of animals in the deep sea, with many species requiring whale falls to complete their life cycles and persist in the ocean,” said Craig Smith, co-author and Oceanography Professor at the University of Hawai‘i at Mānoa. “When whales were removed from the ocean by whalers, these whale-fall specialists lost their essential habitat.”

Fallen whale carcasses are home to species that rely on the unique habitat. Photo credit: C.Smith

“Our models show that the earliest human-caused extinctions in the sea may have been whale fall invertebrates, species that evolved adaptations to live on whale falls,” according to Smith. “As a result of 1,000 years of whaling by humans, many of these whale-fall species may have disappeared before we had a chance to discover them.”

Reflecting on the recent synthesis of data, Roman stated, “This warrants a shift in view from whales being positively valued as exploitable goods—or negatively valued because they compete with people for marine fish—to one what recognizes that these animals play key roles in healthy marine ecosystems, providing services to human societies.”