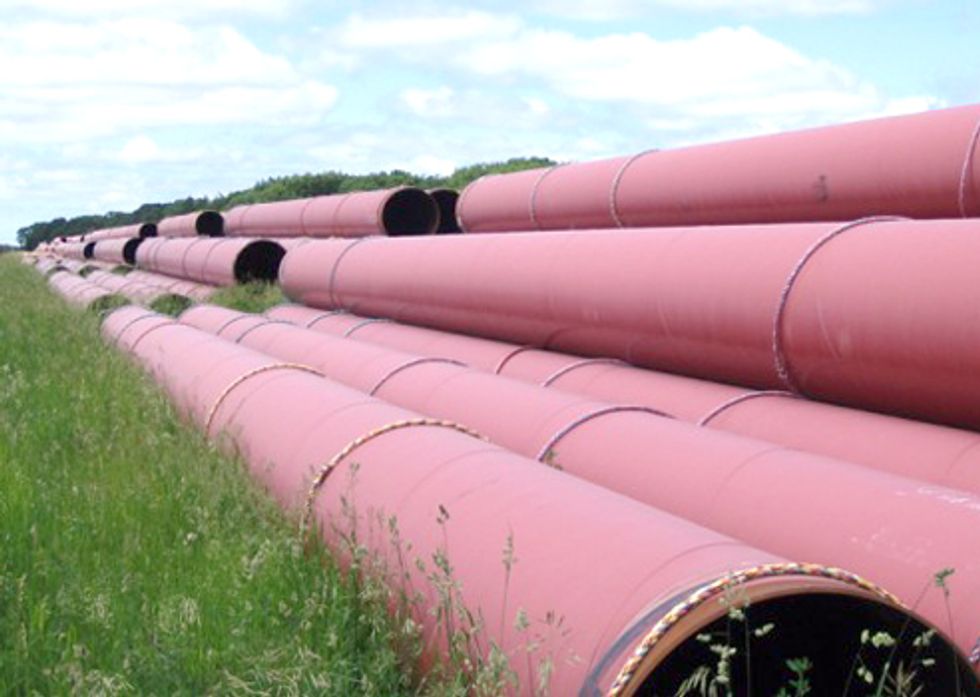 And so the fight over the Keystone XL pipeline goes on.

TransCanada plans to refile its application with the U.S. government in the next few weeks, according to Alex Pourbaix, the company’s president of oil and pipelines.

The new alternative pipeline route will avoid the ecologically sensitive Sandhills and the Ogallala Aquifer, a crucial water source for eight states—which was one of the reasons that the Obama administration blocked the pipeline earlier this year.

“I’ve committed that TransCanada will reroute around the Sand Hills,” Pourbaix said at an energy conference on March 6.

The new plan will include a 100-mile to 110-mile reroute around the Sandhills, with only 20 miles of new pipeline.

“If you take a look and imagine a jog around the Sandhills, you’re probably going to add about 20 miles of pipe, and you will probably have to reroute somewhere in the range of 100 to 120 miles,” he said. “We’re not talking about moving the pipe 500 miles to the left or to the right.”

And once this “mild jog” is complete, the company believes that the last of the obstacles will be overcome “We do not believe that, beyond the Nebraska issue, there are any other issues that still need to be investigated that have not been fully exhausted in the original process,” said Pourbaix. “He [President Obama] made it very clear that it was not being denied on the merits. And he encouraged us to reapply.”

TransCanada also plans to start construction on the pipeline’s southern part from Cushing, Oklahoma to Texas by late spring or early summer, this year. Crucially, because this part does not cross the Canadian border it does not need Presidential approval. In contrast, the southern section will only need standard federal permits which TransCanada believes will be ready shortly.

“By building the southern route right now, it will make it a lot simpler and smaller construction,” Pourbaix said. He added that that the southern pipeline would be ready by next year.

For TransCanada it is a race against time. It needs to get the pipeline built by about 2015, to try and pre-empt the Northern Gateway pipeline from getting approved. By starting on the southern section it will shorten the two-year construction timeline for the longer pipeline. And TransCanada is still optimistic it will make that deadline.

Others agree that this deadline should be met. Bill Klesse, chief executive officer of Valero Energy Corp, America’s largest independent refiner and a key customer for the controversial pipeline, argues the whole pipeline will be approved early next year, no matter what happens in November’s election.

And Klesse then argues that these new supplies of tar sands will allow Gulf Coast refineries to expand exports of gasoline and diesel.

“There are significant changes that are going to occur over the next few years,” Mr. Klesse said. “Export markets are growing and they are a huge opportunity for the refining industry, not just Valero but for the entire industry.”

Klesse has just confirmed what many in the oil industry continue to deny. And that is what Oil Change has always said—that the Keystone XL is an export pipeline.