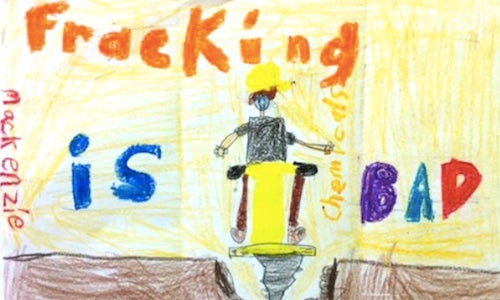 Unconventional oil and gas (UOG) operations such as fracking might allow for cheaper prices to heat your home, but a growing number of scientists are becoming concerned about its unacceptable health implications.

In the first comprehensive literature review to date on the respiratory health risks associated with UOG, experts from the Center for Environmental Health, the Institute for Health and the Environment, Physicians for Social Responsibility and the Alliance of Nurses for Healthy Environments have found that these operations are particularly harmful to infants and young children.

The study, Hazards of UOG Emissions on Children’s and Infants’ Respiratory Health, was published today in the journal Reviews on Environmental Health.

The the U.S. Environmental Protection Agency (EPA) found that there are nearly 700 chemicals used in the fracking process. Fracking fluids can contain a toxic slew of hazardous chemicals that can affect human health and the environment, but oil and gas companies are not required to disclose exactly what they are.

The heavy industrial processes of unconventional oil and gas such as fracking—which involves the pumping of highly pressurized water, sand and chemicals into underground rock formations—can negatively affect air quality in a number of ways, and not just from the release of the trapped oil and gas. The study states:

Sources of air pollution include emissions from the extraction and processing of natural gas, as well as the transportation via natural gas infrastructure components including compressor stations and pipelines. Pollutants can be emitted during venting, flaring, production and leaks from faulty casings. In addition, truck transportation of materials to and from well pads and vehicular equipment use during construction and maintenance generate air pollution from particulate matter and diesel exhaust.

Many of these pollutant groups have been recognized by the Agency for Toxic Substances and Disease Registry, Centers for Disease Control, Environmental Protection Agency, Occupational Safety and Health Administration, and National Institutes of Health as hazardous respiratory pollutants.

Unfortunately, children and newborns may suffer disproportionately from exposure to air pollutant emissions from UOG development. According to the review, a young person’s developing respiratory system is particularly vulnerable to air pollution for a number of reasons:

The authors identified an urgent need for more research on air pollutant emissions associated with UOG, as they commonly occur.

They also recommended a number of ways to move forward in order to ensure public health and safety, such as federal standards that reduce air pollutant emissions from oil and gas development, including methane, VOCs, particulate matter and ozone.

“The EPA’s proposed measures to cut methane and VOC emissions from the oil and natural gas industry will not only address climate change, but also reduce the exposure of nearby communities to these pollutants and the subsequent risk of health effects, including respiratory morbidity and mortality,” the authors noted.

The authors pointed out that people who live in close proximity (less than or equal to a half of mile) to high-density drilling areas are at greater risk for health effects from exposure to natural gas development than those living greater than a half of mile from wells. They thus recommended that schools, hospitals and other dwellings where infants and children might spend a lot of time should be at least one mile away from a drilling facility.

They also strongly recommended policies that strengthen disclosure and transparency about chemicals used in UOG.

“Due to the 2005 Energy Policy Act, a number of chemicals associated with UOG are not reported to the public,” the authors said. “Disclosure of chemicals is critical to be able to understand the full scope of respiratory health effects for infants and children.”