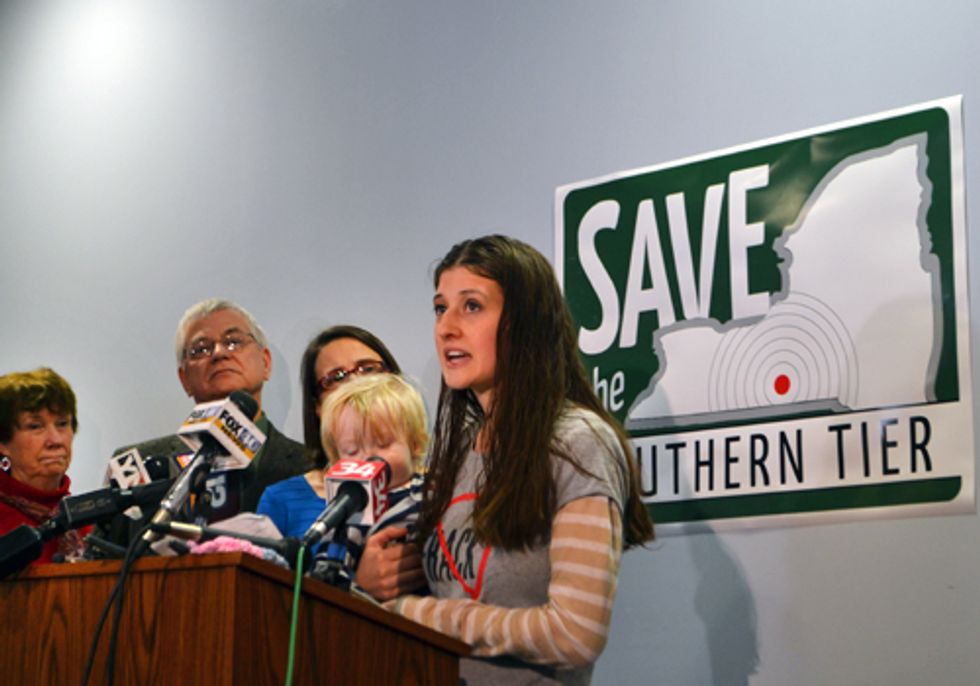 Save the Southern Tier

Logan Adsit, a young Chenango County Mother, speaks at the press event for the launch of the anti-fracking network Save the Southern Tier.

Save the Southern Tier will amplify existing anti-fracking efforts and build and prepare to take significant action to prevent fracking. Despite major ad buys and misinformation campaigns from the gas industry, the most recent Siena Poll shows a significant majority of upstate New Yorkers are opposed to fracking (51 percent opposed versus 38 percent in favor).

Logan Adsit of Pharsalia in Chenango County said, "I'm proud to call the Southern Tier my home and I refuse to sacrifice my health, my child's health and my community's health for the profit of multinational corporations. The Save the Southern Tier network will amplify the majority resistance that is coming out of our communities."

Gerri Wiley, a registered nurse, said, “I speak on behalf of the nearly 3000 residents in the Town of Owego in Tioga County who have signed a petition to prohibit hydraulic fracturing. Seven out of ten residents we canvassed door-to-door, a super majority, do not want fracking to occur in the Town of Owego.”

In their letter, residents of the Southern Tier demand:

“You owe it to us, your constituents from across the Southern Tier, to meet with us to learn our grave concerns. You must allow us to be heard ... we are New Yorkers and we believe you have a responsibility to represent our best interests and protect our well-being. We call on you to meet with us before you make a decision about fracking in New York State.”

Speakers at the press conference included residents from all five sacrificial counties across the Southern Tier, including Binghamton Mayor Matt Ryan, who spoke about the growing opposition to fracking and the concerns among residents.

“I am reassured by baring witness to the tireless resolve of a groundswell of residents choosing to stand up and peacefully but forcefully fight back against this abominable industry. Those who are fighting this are determined and resourceful,” said David Walczak, Steuben County Resident and artist.

“Gov. Cuomo needs to know that our numbers are growing as more and more citizens in this designated area learn the risks posed by the gas industry: the destruction of vast quantities of our water; the pollution of our wells and waterways with their hazardous waste; the constant air, light and noise pollution from wells, pipelines and compressor stations; and the destruction of our roads by the very heavy trucks that will make thousands of trips for each well; and most importantly, sacrificing our family's health,” said Eileen Hamlin, Southern Tier Chair of Working Families Party.