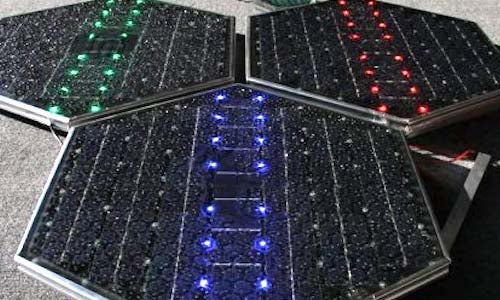 Missouri’s Department of Transportation (MoDOT) has announced plans to install solar panels at a rest stop alongside the iconic Route 66 as part of the department’s “Road to Tomorrow Initiative.”

The Historic Route 66 welcome center in Conway, Missouri will receive the nation’s first solar roadway panels on a public right of way.

“… part of why we picked this location is because of the the historic Route 66 concept,” Laurel McKean, MoDot assistant district engineer, told KY3. “You know, here’s one of the main roadways that’s iconic for the United States, and being able to use the history to create potentially the future.”

The panels were developed by Solar Roadways, an Idaho-based startup founded by Scott and Julie Brusaw.

Their project received tons of attention in 2014 after the world caught wind of the couple’s ambitious plan to harness the energy being soaked up by the country’s roads and parking lots all day. Their viral video “Solar FREAKIN’ roadways” has been viewed more than 21 million times to date.

KY3 reported that MoDot will first test out a 12-by-20 foot patch of panels on a sidewalk leading to the rest stop’s main entrance.

“This is kind of the first phase, and we hope in the future that we then can move it out into maybe the parking lot, and then maybe into a travel area,” McKean said.

Not only will the panels help generate power for the rest stop, the panels’ heating elements will prevent snow and ice accumulation.

“What’s so appealing from the revenue side is yeah, if we don’t have to treat roads or sidewalks or pavement anymore, that’s less material, less chloride, less things that go into the environment and also the aspect of getting energy,” McKean said.

“We expect them to be in place, I’m hoping, by the end of this year, maybe before snow flies,” Tom Blair, leader of the department’s Road to Tomorrow Initiative, told The Kansas City Star, adding that the project could bring “the history and the future together.”

Solar Roadways’ own 2014 crowdfunding campaign generated $2.2 million, doubling their $1 million target. The project has also received three funding contracts from the U.S. Department of Transportation, with their latest contract awarded in November 2015. In April, the Idaho Department of Commerce approved a $48,734 grant to set up a Solar Roadways demonstration project within the city limits of the Brusaw’s hometown of Sandpoint.

Blair said that the department will prepare its first-ever crowdfunding effort to “ask for money to make our solar roadway pilot project even bigger and better.”

Scott Brusaw describes the technology behind the solar panels in the video below. Besides creating renewable electricity, the panels feature LED lights to create lines and signage without paint and to improve nighttime driving. Since the hexagonal panels are modular, it allows for easy repairs since a broken panel can just be swapped with a new one.

The Solar Roadways program is one of MoDOT’s several pilot schemes to promote transportation technology in the state. Other schemes include smart pavement, smart traffic control and truck platooning, which connects commercial trucks via wireless technology and thus allow trucks to follow at a close distance for better fuel economy and enhanced safety.

“It gets Missouri and MoDOT prepared for 21st century innovations,” Blair said. “We need to get in the game as a state and as an agency.”

Missouri is not the only one wanting to ride on the sun. SolaRoad has been in operation in the Netherlands since November 2014, and has been generating more power than expected. The French government also plans to pave 1,000 kilometers (621 miles) of its roads with solar panels in the next five years, which will supply power to millions of people.

“The maximum effect of the program, if successful, could be to furnish 5 million people with electricity, or about 8 percent of the French population,” Ségolène Royal, France’s minister of ecology and energy, said according to Global Construction Review.