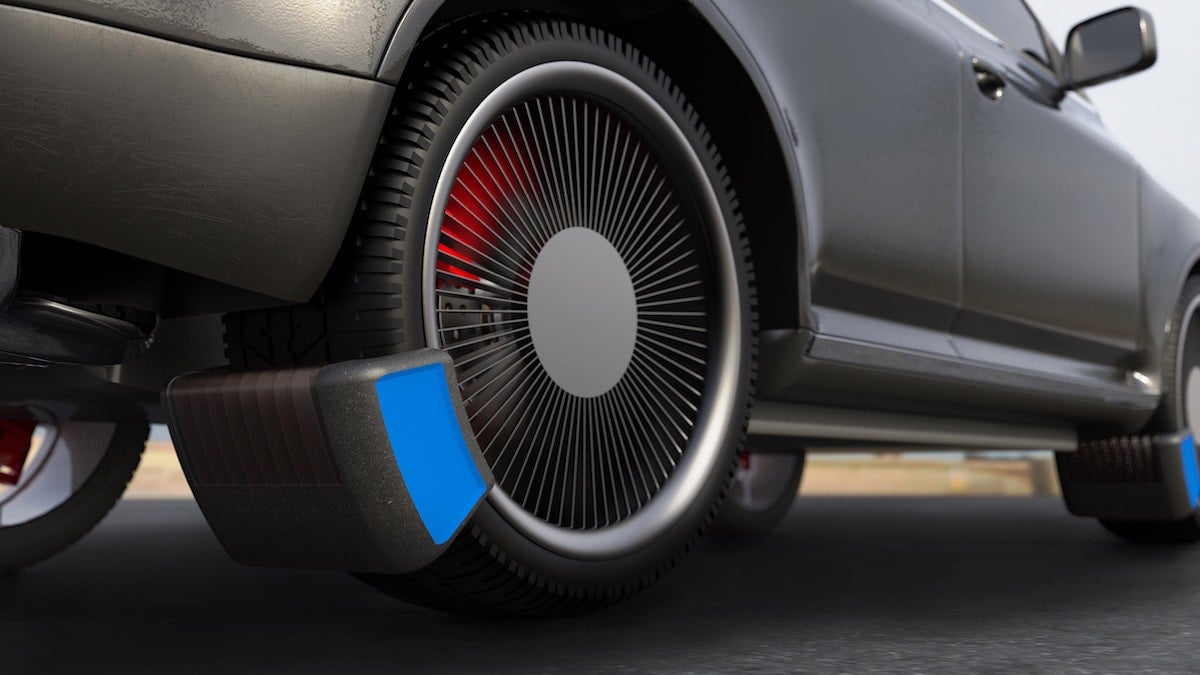 The Tyre Collective designed a simple device that collects microplastics as they fly off a car tire. As the group of designers explains it, their device helps on the path toward zero emissions by using electrostatic and airflow around the tire to capture the microplastics and other small particles that are shed over the lifetime of a tire.

As Autocar in the UK reported, the team says that their design is capable of catching up 60 percent of the particles shed by tires, which is significant considering that tires are one of the largest sources of ocean microplastics, according to a study in Nature Communications. That study found that tiny particles shed by tires and brake pads account for roughly 550,000 tons of microplastics that pollute the oceans annually. From that, over 80,000 tons rain down on remote areas covered in ice and snow, which helps accelerate the rate of melting, as The Guardian reported.

“Everyone focuses on air pollution being directly from the engines themselves and coming out of the exhaust pipe but what people don’t necessarily recognize is that tire wear is a huge contributor to that,” said Hugo Richardson, one of the members of The Tyre Collective, as Reuters reported.

Richardson is one of a team of four students from Imperial College London and the Royal College of Art who make up The Tyre Collective. Richardson and the three other students, Siobhan Anderson, Hanson Cheng and M. Deepak Mallya, say they share a passion to use design in a way that advances environmental causes, according to The Guardian.

“As a team, our strength lies in our diversity,” said Richardson, as The Guardian reported. “We come from all four corners of the globe and bring with us a wealth of knowledge in mechanical engineering, product design, architecture and biomechanics.”

As the world moves toward more renewable energy and the technology of electric vehicles improves, a device like this may play an important role in making cars more environmentally friendly. That’s due to the fact that electric vehicles do not solve the problem of tire pollution. In fact, they may make it worse since electric vehicles are usually heavier than cars with internal combustion engines, according to Autocar.

“We were unanimously drawn to The Tyre Collective for their creative innovation around this urgent issue of microplastic shedding from tires,” said Sophie Thomas, one of the judges of the James Dyson award, according to Autocar. “This collaborative, multidisciplinary team questioned and challenged, building an approach that demonstrates the crucial role of design and enquiry when we search for solutions to these global problems.”

The tiny particles that the designers created can be recycled to make new tires, ink or other materials, according to Autocar. Right now, the design is just a prototype, but the team hopes to use its £2,000 (approximately 00) reward toward finding a way to scale up its product sustainably.

“In the future it could be integrated into the wheel arch or even into the mud flap behind the wheel,” said Siobhan Anderson from the The Tyre Collective team, as Reuters reported.