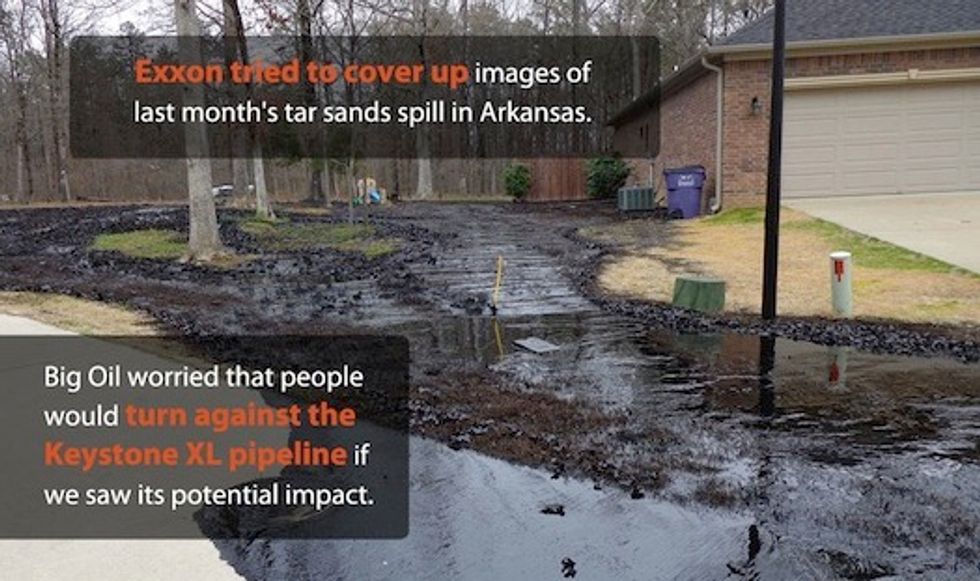 "All Risk, No Reward" Coalition

Residents of Mayflower, AR who were victims of Exxon’s Good Friday tar sands spill that coated their neighborhood in toxic tar sands traveled to DC to hand-deliver a letter to Secretary Kerry asking that he reject Keystone XL. The members of the Remember Mayflower Coalition stood in front of the State Department to appeal to Secretary Kerry, urging him to consider the recent spill—and the subsequent devastation—and listen to the Vice President’s opinion on the pipeline as he makes his final analysis of Keystone XL.

Thanks to a campaign by Oil Change International, SumOfUs and Environment America, every day for the next few weeks as the State Department officials who are reviewing public comments on Keystone XL commute to work, they’ll be greeted by ads in the Foggy Bottom metro station in Washington, DC. These ads show images from the recent pipeline spill in Mayflower, AR, reminding everyone who walks by that we can expect more of the same if Keystone XL is approved.

The residents appealed to Secretary Kerry to accompany his staff on a fact-finding trip to Mayflower. From the letter:

Before you issue your final evaluation of Keystone XL, we ask that you and your staff come to Mayflower to see what happens when a tar sands pipeline ruptures in your backyard. We ask that you observe the remnants of black tar, smell the toxic chemicals that are polluting our air and ask yourselves whether you can in good conscience inflict this same devastation on families along Keystone XL’s route.

"Bold Nebraska has invited President Obama to Nebraska and now Secretary Kerry has an open invitation to visit Arkansas," said Jane Kleeb, executive director of Bold Nebraska and member of the All Risk, No Reward Coalition. "They have got to look our families in the eyes before they do this to us."

“My four children and I have grown up on this lake, but it’s no longer safe to be here or to breathe the air,” said Mayflower resident Genieve Long. “Other families shouldn’t have to take on these risks or worry about their health and safety. This already happened to my family—I want to make sure it doesn’t happen to anyone along the Keystone XL route.”

“I'm not a tree-hugger and I'm not an activist, but I am a concerned, single dad of 15-month old boy. One day my son will inherit my property along with 400 linear feet of pipeline. There are enough things to think about as a landowner, let alone when there’s a possibility of another tar sands rupture,” said Mayflower resident Damien Byers. “These pipelines are too risky for me and my son and they’re too risky for families in Nebraska. We need to shut down Pegasus and stop Keystone XL. The All Risk, No Reward Coalition and the Remember Mayflower Coalition are teaming together to help people like me.”

The Remember Mayflower Coalition announced that they would be joining the “All Risk, No Reward” Coalition to stop Keystone XL.

We are writing on behalf of all affected families in Mayflower, Arkansas—the 22 families who were evacuated from their homes, the dozens of people living in surrounding areas who have been exposed to toxic chemicals, and the hundreds of thousands of Arkansans who get their water from the Lake Maumelle watershed—to ask that you remember Mayflower as you continue to evaluate the permit for Keystone XL.

After witnessing the devastation in our community following the Good Friday tar sands spill, we cannot in good conscience sit by and watch as other communities suffer the same fate. ExxonMobil has demonstrated that tar sands pipelines spill. Their Pegasus tar sands pipeline spilled first in Arkansas—and then one month later across the border in Missouri. And when these tar sands spill, they threaten our water, our health, and our homes.

We are working with elected officials to move Exxon’s Pegasus pipeline away from the Lake Maumelle watershed, which provides drinking water for hundreds of thousands of Arkansans. We have overwhelming support from community leaders and politicians, and will do everything we can to protect our water.

But the people of Nebraska aren’t as lucky. The Ogallala Aquifer provides irrigation and drinking water for millions of Americans in Nebraska and across the country, and their water is at risk if Keystone XL is constructed. But they don’t have the same advocates we have. You and President Obama are their only hope to protect their water, land, and health.

There is still so much we don’t know about tar sands—about the economic risks of them spilling in communities, about how they impact important water sources, and about how they effect our health. We don’t know enough to say “yes” to a massive tar sands pipeline through the country’s heartland.

Before you issue your final evaluation of Keystone XL, we ask that you and your staff come to Mayflower to see what happens when a tar sands pipeline ruptures in your backyard. We ask that you observe the remnants of black tar, smell the toxic chemicals that are polluting our air, and ask yourselves whether you can in good conscience inflict this same devastation on families along Keystone XL’s route.

We will open our doors to you and your staff—and promise home-cooked Southern meals to accompany our accounts of the spill.