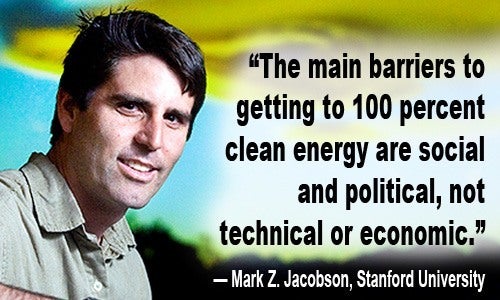 As world leaders prepare to gather in Paris for a landmark climate summit, a new analysis from Stanford University and University of California researchers lays out roadmaps for 139 countries, including the world’s major greenhouse gas emitters, to switch to 100 percent clean, renewable energy generated from wind, water and sunlight for all purposes by 2050.

Mark Z. Jacobson, a Professor of Civil and Environmental Engineering at Stanford University and director of the school’s Atmosphere/EnergyProgram, said the roadmaps should give negotiators and leaders confidence that they can meet energy demands in all energy sectors—including electricity, transportation, heating and cooling, industry and agriculture—with clean sources.

“The main barriers to getting to 100 percent clean energy are social and political, not technical or economic,” Jacobson told members of Congress and ambassadors from countries participating in the negotiations during a forum Thursday in Washington, DC.

All the roadmaps are available via an embeddable collection of interactive maps on The Solutions Project’s website.

Jacobson and his colleagues found that future costs for producing clean energy are similar to a business-as-usual scenario of about 11 cents per kilowatt hour, similar to the average cost in America today. The air pollution and climate costs due to fossil fuels, however, are virtually eliminated by clean-energy technologies.

Overall, the analysis found, the business, health, plus climate costs of a 100 percent clean and renewable energy system were more than 60 percent lower than those of a business-as-usual system.

Switching to 100 percent clean energy would prevent four to seven million premature deaths each year globally from pollution associated with fossil fuels. By comparison, about six million people die prematurely each year from smoking, according to the Centers for Disease Control and Prevention.

Globally, the transition to clean, renewable energy would create more than 20 million more jobs than would be lost in the transition. It would also stabilizeenergy costs, thanks to free fuels such as wind, water and the sun; reduce terrorism risk by distributing electricity generation; and eliminate the overwhelming majority of heat-trapping emissions that contribute to climate change.

The researchers also calculated that just 0.3 percent of the world’s land footprint would have to be devoted to energy production under a 100 percentclean energy scenario. That is less than the size of Madagascar.

Jacobson and his colleagues are also slated to publish a study in the Proceedings of the National Academy of Sciences on Nov. 23 which examines how to achieve reliability under a 100 percent clean energy scenario for the U.S.

The countries in the roadmap include the world’s major emitters, and were selected based on available International Energy Agency data. Last week, the IEA’s energy outlook concluded for the first time that renewables are already set to outpace coal as the world’s leading source of electricity.

“The past few years have seen dramatic increases in the growth of renewable energy,” Jacobson said. “Countries can ramp that up even faster and enjoy a host of economic and health benefits by doing so.”

Earlier this month, National Geographic highlighted Jacobson’s earlier research on clean energy roadmaps he drew up for all 50 U.S. states, calling the project a “blueprint for a carbon-free America.” The magazine will highlight his new research on the 139 country roadmaps to clean energylater this month. The paper, along with underlying data and tables are available on Jacobson’s faculty website. The analysis uses the same methodology as a previous study published in Energy and Environmental Science, and will be formally published in a journal next year.