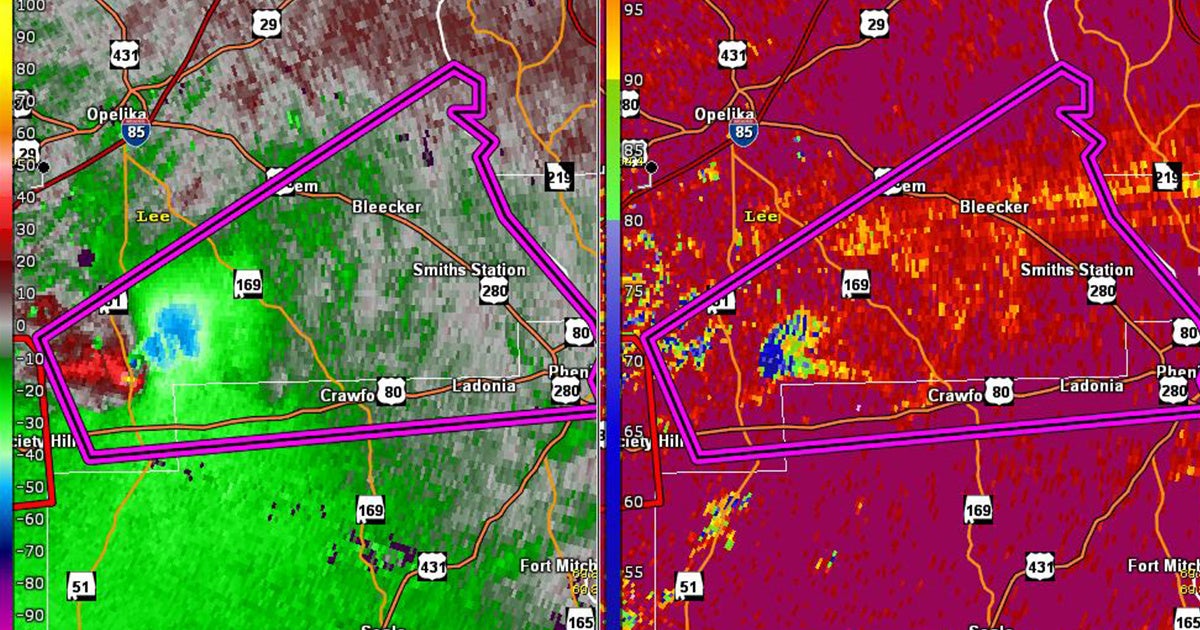 At least 23 people have died after a tornado barreled through Lee County, Alabama on Sunday, leaving behind damage that Sheriff Jay Jones described as “catastrophic,” CBS reported.

“I cannot recall, at least in the last 50 years, and longer than that, a situation where we have had this type, this loss of life that we experienced today,” Jones told CBS affiliate WRBL-TV.

Here's a radar loop of the destructive tornado that ripped through southern Lee County earlier today. This was the 1st tornado to impact the county. #alwx pic.twitter.com/QfKIju6OuN

There are children among the dead, Jones further told The Associated Press. He said the death toll could rise, but that search and rescue efforts had to pause Sunday night because the amount of debris made the work unsafe in the dark.

The National Weather Service (NWS) in Birmingham, Alabama issued a tornado emergency at 2:09 p.m. Sunday for Lee County, AccuWeather reported. The tornado was part of an extreme weather event Sunday that saw several tornadoes touch down across the Southeast as part of a series of storms, The Associated Press reported.

The incident comes a little less than six months after a Northern Illinois University study found that tornado frequency was trending away from the traditional “tornado alley” of the Great Plains towards the more densely populated Midwest and Southeast. This is bad news for the South, where tornadoes are more deadly because of higher population density, a high number of vulnerable mobile homes and a greater chance of tornadoes occurring at night.

Toto, I get the feeling tornadoes aren't in Kansas anymore (actually they still are, just fewer of them). Tornado activity is moving eastward away from TX & OK toward Miss. River area, north & east ; https://t.co/SARMwYFVEu pic.twitter.com/SlFdOuywe5

Researchers told CBS at the time that the eastward shift of tornadoes was related to the eastward push of dry air from the desert into the plains, shifting the “Dry Line” between dry desert air and warm, wet Gulf of Mexico air along which most tornadoes occur.

Study author Dr. Victor Gensini of Northern Illinois University told CBS this shift could be due to climate change.

“It’s not a big jump to say that climate change is causing this shift east. The hypothesis and computer simulations support what we are observing and what we expect in the future,” Gensini told CBS.

Sunday’s tornado was at least half a mile wide and measured an F3 on the Fujita scale according to initial NWS calculations. The Fujita scale assesses tornado wind speed and corresponding destruction from zero to five. An F3 tornado has a wind speed of 158 to 206 miles per hour.

We had someone on the ground in Lee Co briefly before the sun went down. First tornado to impact Lee County today was at least an EF-3 & at least 1/2 mi wide…this is pending further/more detailed assessment tomorrow. #alwx

The storm destroyed homes and knocked out power in Beauregard, Alabama and destroyed around 20 homes in Smiths Station, Alabama, CBS News reported.

“Our hearts go out to those who lost their lives in the storms that hit Lee County today. Praying for their families & everyone whose homes or businesses were affected,” Alabama Governor Kay Ivey said in a Tweet Sunday, as CBS reported.

Correction: An earlier version of this article referred to Sunday’s tornado as the first in Lee County, AL. There have in fact been 40 tornadoes in Lee County since 1950, according to NOAA’s Storm Events Database, not including Sunday’s storms.