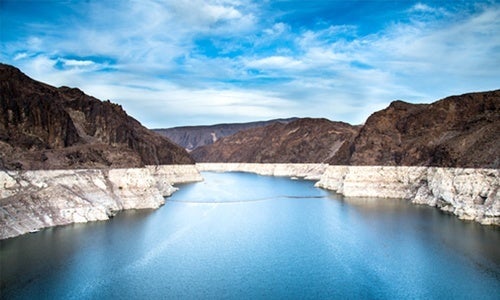 Lake Mead, America’s largest U.S. reservoir when at capacity, is about to hit a critical new low. The reservoir near Las Vegas on the Colorado River has been in decline for decades because the reservoir and the larger Colorado River system has been over-allocated for many years. As of yesterday, the elevation of Lake Mead was 1,075.96. The reservoir is only days away from hitting 1,075 feet, according to the U.S. Bureau of Reclamation’s projections. That number is the threshold set in a 2007 agreement as part of the U.S. Department of Interior’s Colorado River Interim Guidelines, which calls for delivery cuts if water levels in Lake Mead drops below that level. 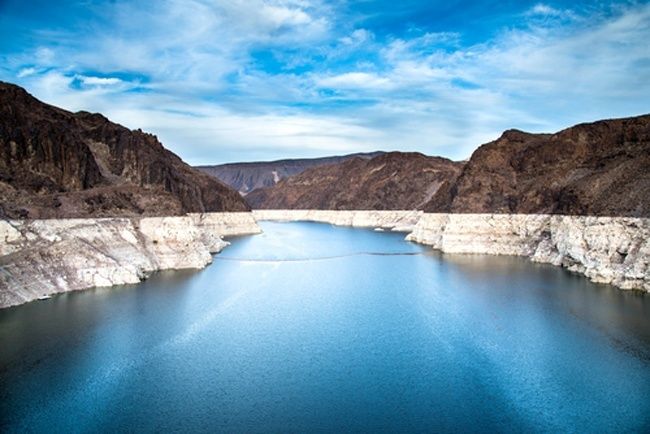 Water experts refer to the high water mark, which is white because of mineral deposition, as the “bathtub ring.”

These cuts will be the first set of mandatory water delivery curtailments to Lake Mead. Should the water levels continue to drop, as they are expected to—due to the prolonged drought, climate change and poor water management—more cuts will be required. The Western Water Policy Program and the Bren School of Environmental Management at the University of California, Santa Barbara recently released their spring report, The Bathtub Ring, which examines the impacts as Lake Mead levels decline to 1075 feet, 1050 feet, 1025 feet and 1000 feet.

The Bureau of Reclamation predicts the first round of cuts could take place in January 2017 with Arizona and Southern Nevada seeing the biggest cuts. Arizona plans to curtail “groundwater recharge efforts” and cut “deliveries to farmers with low-priority rights,” according to the Las Vegas Sun. Arizona’s cities “would be unaffected, at least initially.” Southern Nevada, for its part, “has prepared with conservation, saving enough water that residents and businesses won’t be affected if a portion no longer is available.”

Further reductions would kick in when the reservoir dips below 1,050 feet and again at 1,025 feet. When the water level hits 1,025 feet, “a new round of water rationing would have to be negotiated,” reports the Las Vegas Sun. The epic drought has left water officials scrambling to plan for rapidly diminishing water levels. 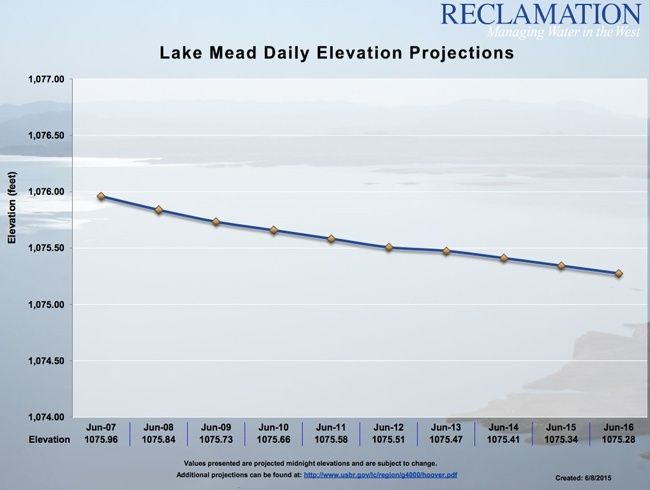 Lake Mead’s elevation is projected to hit 1,075 feet in the next few weeks, according to the U.S. Bureau of Reclamation

“We’re headed to a new normal,” Gary Wockner, executive director of the nonprofit Save the Colorado River, told the Las Vegas Sun. “It remains to be seen what will happen, but political tensions are very likely.”

Upper-basin states are considering building more dams because states are feeling pressure to “use it or lose it” when it comes to water resources. But that will only make the problem worse as states across the West compete for fewer and fewer resources.

The Bathtub Ring report examines the impacts to water deliveries, hydropower generation, recreation and the environment as Lake Mead declines to the shortage levels of 1075 feet, 1050 feet, 1025 feet, and 1000 feet.

“It increases the likelihood that lower-basin states would have to do a ‘call on the river,’ where the lower basin will have to legally demand that the water is sent down river,” Wockner told EcoWatch. “It’s likely going to create a political crisis.”

Up until now, the seven states that share the Colorado River’s water have “put aside their differences in order to survive,” said the Las Vegas Sun. But that could change as water resources become more and more scarce in the drought-stricken West.

“As the Lake drops and the cuts begin, we need to rethink and re-manage the river,” said Wockner. “The farmers and cities may soon feel what the Colorado River already feels everyday—it is drained, dried up and depleted. We need a new Colorado River Compact that allocates water to the river’s health in addition to the health of the Southwest’s economy.”

Is Game of Thrones Actually About Climate Change?