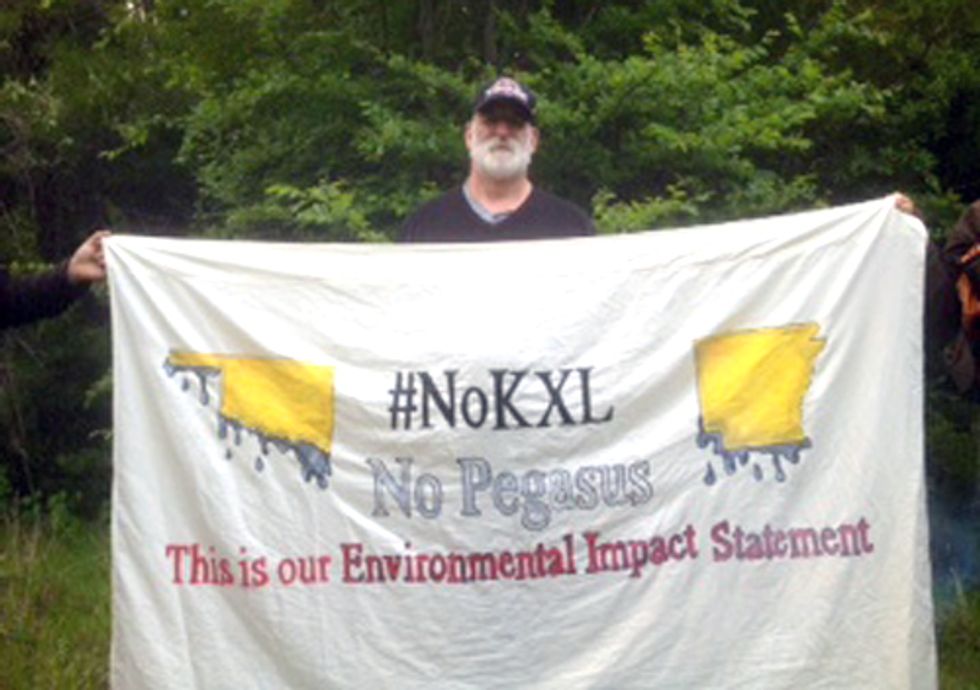 Alec Johnson, a 61-year old climate justice organizer from Ames, Iowa took direct action to defend the Red River in solidarity with the Mayflower, Arkansas community, which is currently reeling from last month’s massive tar sands spill. The disaster, due to a 22-foot long gash in ExxonMobil’s ruptured Pegasus tar sands pipeline, has resulted in chronic health problems for nearby residents and has left Lake Conway dangerously polluted.

“This is our environmental impact statement. TransCanada claims its technology will prevent spills, but that same technology was used on the Pegasus line, too," stated artist/activist and Great Plains Tar Sands Resistance spokesperson Richard Ray Whitman. "That didn’t work, now, did it? We are taking a stand to protect our access to clean water. KXL South is already being constructed with or without the north, and the destruction of our waterways in its path is not a question of if, but when. No toxic pipeline is worth the gamble and no communities in Texas or Oklahoma deserve the fate of Mayflower, Arkansas.”

While the current fate of KXL North rests upon U.S. Presidential approval, KXL South’s now lies in the broad-spectrum opposition it has garnered in the form of legal cases as well as the grassroots civil disobedience campaigns by groups like Great Plain Tar Sands Resistance and Tar Sands Blockade. Should KXL North be permitted to start construction, these groups along with grassroots indigenous organizations, several Lakota Nation tribal councils, and more than 60,000 others have pledged resistance in the form of non-violent direct action to halt pipeline construction.

International treaties like the Treaty to Protect the Sacred and strongly-worded tribal council resolutions like those recently passed by the Oglala and Ihanktonwan Oyate/Yankton Sioux General Councils pledging resistance to KXL North “by all means necessary” indicate a tremendous unity amongst Great Plains indigenous nations. The strong reactions come after years of inadequate consultation on the part of TransCanada with regards to impacts on the Lakota Nation communities by its toxic tar sands pipeline.

In recognizing the dire threat to their first medicine, sacred water, the communities are also embracing the spirit of international solidarity with First Nation communities downstream from tar sands mining sites. After years decrying the chemical pollution and resulting destruction of traditional life ways from tar sands exploitation in what some affected indigenous peoples refer to as a “slow industrial genocide,” Cree and Dene Nations are experiencing an upsurge in sympathy and solidarity with their plight.

“I am personally amazed at how resistance to the Keystone XL tar sands pipeline and education as to what tar sands exploitation looks like continues to grow every day,” Johnson wrote in a statement prior to his action. “Because it would be irresponsible, we’re not stopping until the industry stops poisoning our futures with lies, unnecessary risks, and death for their profit. As long as the tar sands industry promises it will kill, we will blockade.”