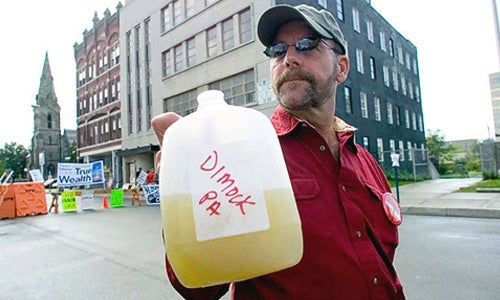 The decision, following the 14-day trial and 8.5 hours of deliberation over two days, is a huge victory for the families.

“Congratulations to the Ely and Hubert families for winning in federal court today against Cabot Oil & Gas for poisoning their water from drilling and fracking operations,” Mark Ruffalo, on behalf of Americans Against Fracking, said.

“Drilling and fracking are contaminating water throughout Pennsylvania and across the United States and it’s now time for Governor Wolf to recognize the damage that is being inflicted on Pennsylvanians’ water and health. It is also time for President Obama to let the the U.S. Environmental Protection Agency do its job and investigate thousands of complaints across the country of drilling and fracking polluting drinking water supplies and harming the American people. This jury trial reflects that drilling and fracking caused groundwater contamination, and this is only the beginning.”

The Dimock case dates back to 2009 when 44 plaintiffs brought a lawsuit against the company. In the five years since initiating litigation, the Elys and Huberts were the only plaintiffs remaining on the case as the vast majority had settled with the company.

“$4.2 million will not bring back drinkable well water to the long-suffering families of Dimock, Pennsylvania,” Sandra Steingraber, PhD, science advisor for Americans Against Fracking, told EcoWatch.

“No amount of money can do that. Once groundwater is polluted, it’s polluted forevermore. But what this important jury decision does do is strip away the mirage of omnipotence that Cabot and other gas companies operate behind. Fracking poisons water. That’s what the science shows. The frackers will be held responsible. That’s what this court decision shows.”

A NPR StateImpact report, prior to the trial, said that Cabot Oil & Gas had already accumulated more than 130 drilling violations at its Dimock wells, yet insisted that methane migration in Dimock’s water is naturally occurring. The company is currently banned from drilling in a 9-mile area of Dimock but is trying to lift the ban.

A state investigation, according to the AP, found that Cabot had allowed gas to escape into the region’s groundwater supplies, contaminating at least 18 residential water wells.

Cabot had no immediate comment Thursday but planned to release a statement on the verdict, the AP reported.

“It’s very important that when a company like Cabot harms Pennsylvania families … that the courts are a sanctuary for people to seek justice,” the families’ attorney, Leslie Lewis, said in closing arguments Wednesday, according to The Times-Tribune of Scranton.