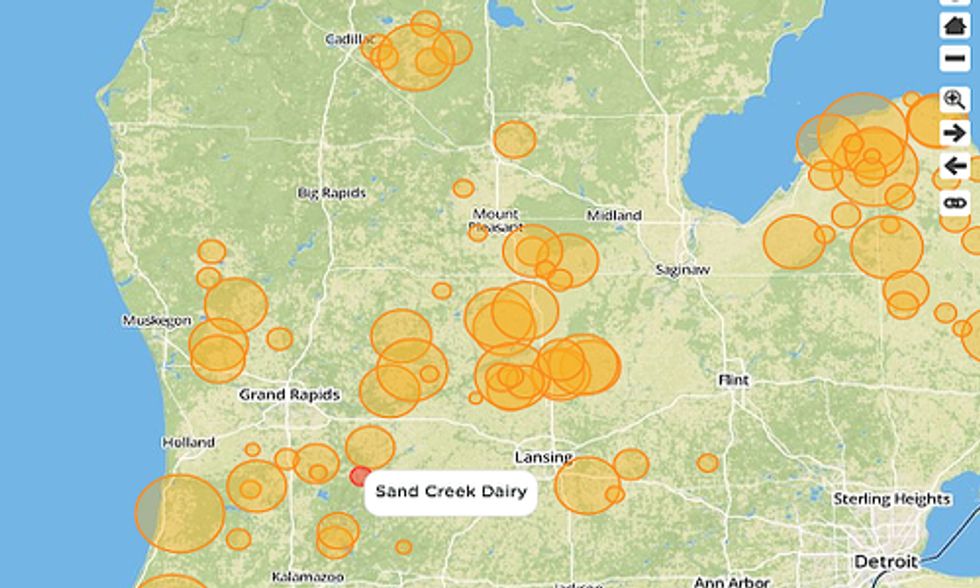 Today's large-scale industrial agriculture relies heavily on Confined Animal Feeding Operations (CAFOs) that house large numbers of livestock in cramped quarters. As has been well documented, violations and questionable—even illegal—practices seem to run rampant on factory farms, the consequences of which have a negative impact on public health and the environment.

Center for Food Safety (CFS) has worked for years to bring these issues to light and this week they released a digital map of the CAFOs in the state of Michigan. According to CFS, the map—which will serve as a model for other states—includes the location and size of animal factories, as well as environmental violations, type of manure storage, nearby rivers and waterways, nearby schools, federal subsidies and other information.

“This map helps put these factories into the context of the communities they impact,” said Paige Tomaselli, senior attorney for CFS. “The industrial meat industry is trying to keep consumers in the dark, but these massive operations have significant impacts on the environment and overall health of a community. This map is designed to be a tool to help consumers and residents understand how these animal factories impact their lives.”

Massive amounts of excrement produced in these facilities have been found to contaminate drinking water and cause air pollution. Manure decomposition produces more than 160 gases—including pollutants and irritants like hydrogen sulfide, ammonia, carbon dioxide, methane and carbon monoxide. The Centers for Disease Control and Prevention recognize that "the closer children live to a CAFO, the greater the risk of asthma symptoms," yet CAFO air emissions are largely unregulated.

Nitrogen and ammonia from excrement put both the environment and human health at risk. CFS points out that nitrogen can lead to blue baby syndrome (a serious heart condition in newborn babies), while other bacteria and viruses can cause public health crises. It is estimated that more than one million Americans access groundwater that is moderately to severely contaminated by nitrogen.

“We hope that this new tool allows more communities who have been adversely impacted by these behemoth operations to take a stand. Access to accurate information is a vital first step,” said Tomaselli.

CAFO water pollution can be toxic to fish and other wildlife. In the Gulf of Mexico, nutrient-rich water from the Mississippi River basin empties into the Gulf and causes toxic algal blooms. Nutrients, like nitrogen and phosphorus, are used to fertilize gardens and crops, but create aquatic "deadzones," in which excess nutrients choke out oxygen in the water and create an environment that does not support aquatic life. Last year the deadzone covered 5,840 square miles—an area the size of Connecticut.

FDA Regulation of Antibiotic Use on Factory Farms Proves Worthless