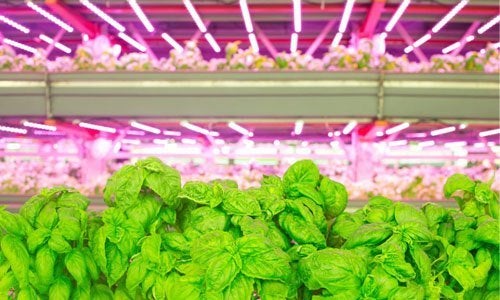 Chicago isn’t usually known as a farming hub, but did you know that Windy City residents are dining on organic produce such as basil, arugula, kale and microgreens right from their backyard?

FarmedHere, a 90,000-square-foot space in Bedford Park that opened in 2013, is not only the first organically-certified indoor vertical aquaponic farm in Illinois, it’s also the largest indoor farm in North America.

“Our produce is local, it’s healthy, it’s organic and our produce is sold 24 hours from harvest date to our retailers,” says former FarmedHere CEO and current chairman Mark Thomann in the video above.

FarmedHere’s two-story, windowless farming facility currently sits on the site of a formerly abandoned warehouse in the outskirts of Chicago.

A variety of plants grow on racks that are stacked on top of each other in a vertical farming system, as well as an aquaponics system, which combines tilapia (and the fish’s waste) and plants (which filter the waste) to grow food.

Want to learn the science behind our #aquaponic process? So simple it only took us a few minutes to map it out! pic.twitter.com/m4Pw0ptEwl

FarmedHere’s produce is grown in a sustainable environment where 97 percent of fresh water is reused and plants are grown without the use of herbicides or pesticides. The farm’s LED lighting system mimics outdoor conditions, meaning plants don’t need natural sunlight to grow.

According to PSFK, the company boasts “up to 15 times as many crop cycles a year compared to traditional farming” and supplies its harvest for approximately 80 retailers in Chicago.

The company says that total growing time is about 30 days, which is half the time of traditional farms.

“Our vertical growing technology and local distribution methods reduce energy use, travel time and costs tremendously, making this model one of the most sustainable ways to guarantee access to fresh, healthy produce in city centers, in any season,” the company, which launched in 2010, advertises on its website.

The global population is expected to reach a staggering 10 billion by 2056 and there is only so much arable land available. Climate change is only confounding the problem, as extreme weather events such as flooding, hurricanes and drought increase in frequency and intensity, and leave a damaging impact on agriculture.

The beauty of indoor farms, which are sprouting up from Japan to Jackson, Wyoming, is that the plants growing inside are immune to hot, cold or extreme weather.

Although the weather outside is frightful, in here, it's always delightful! #HappyHolidays http://t.co/lHi94zFEXq pic.twitter.com/3S2mZFqFli

If all goes according to plan, those of us outside of Illinois might get to enjoy FarmedHere’s year-round, fresh-grown produce a lot closer to home.

At the Indoor Ag-Con held earlier this month in New York, newly appointed FarmedHere CEO Matt Matros announced ambitions for 18 new indoor farms spread across the country that could provide local (meaning less than 200 miles) produce for up to 75 percent of the country’s population.

“We are not competing with each other, but with Central Valley agriculture” Matros said during his keynote speech.

“We want to create the Disneyland of vertical farming,” he said.

Matros told Chicago Tribune that he hopes to expand to 12 to 15 farms across the U.S. within five years and eventually have farms around the world.

“Everything about this business is good, and it solves a really big problem,” Matros told the publication. “We’re going to have nine billion people in the world by 2050. What are we going to feed them?”

Matt Matros of @FarmedHere "we want to create the Disneyland of vertical farming" pic.twitter.com/NoCerGZ2VF