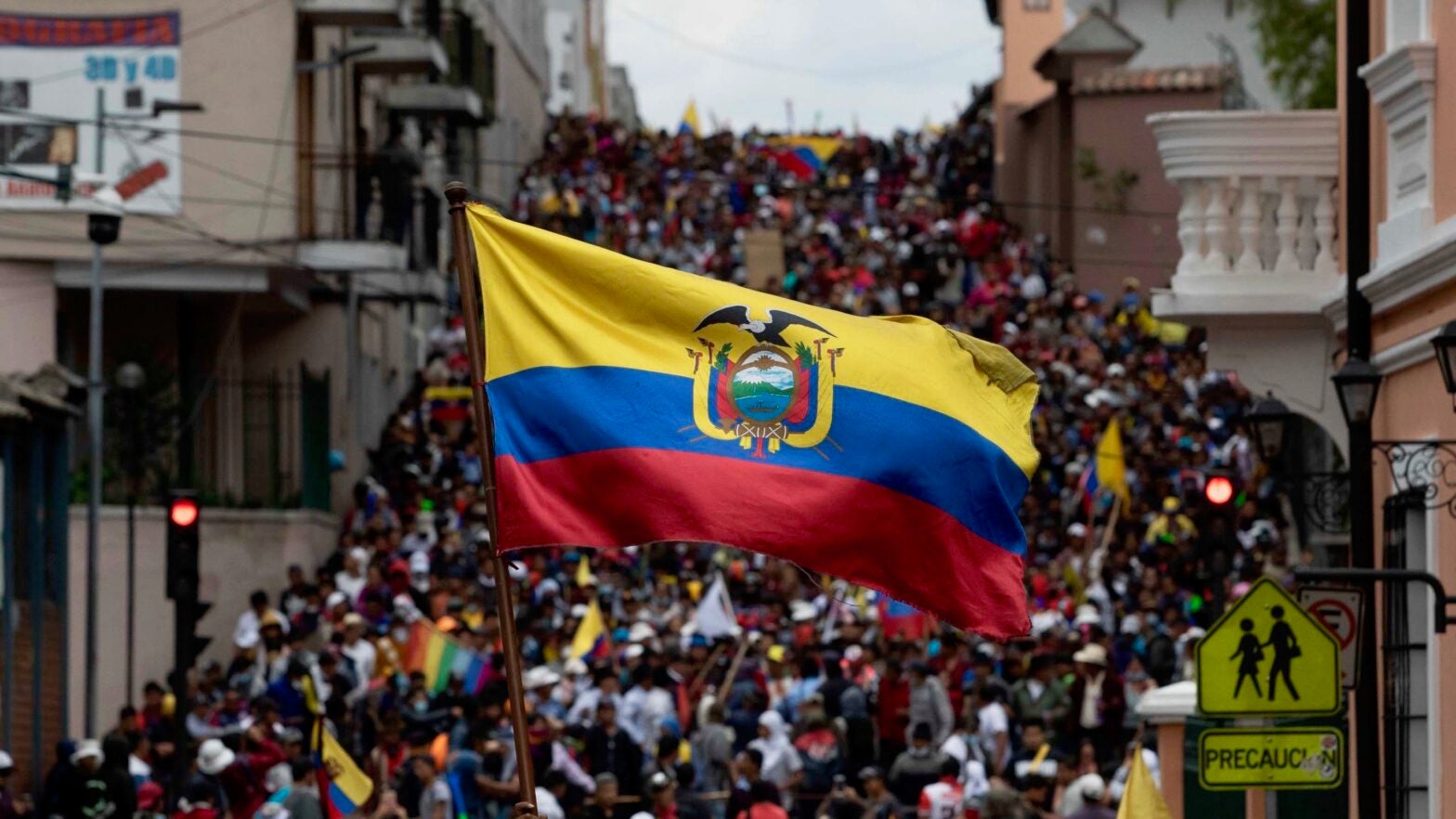 A demonstrator waves an Ecuadorian flag during protests against the end of subsidies to gasoline and diesel on Oct. 9 in Quito, Ecuador. Jorge Ivan Castaneira Jaramillo / Getty Images

The night before Indigenous Peoples’ Day, an Indigenous-led movement in Ecuador won a major victory.

“I’m so happy I don’t know what to say. I don’t have words, I’m so emotional. At least God touched the president’s heart,” protester Rosa Matango said in an Associated Press story published by The Guardian. “I am happy as a mother, happy for our future. We indigenous people fought and lost so many brothers, but we’ll keep going forward.”

The protests began when the government announced Decree 883, a set of spending cuts agreed to with the International Monetary Fund in exchange for a loan. That package included an end to fuel subsidies, which caused gas prices to skyrocket, BBC News explained. The harm would have extended beyond gas, Quito-based activist Kevin Koenig explained for Amazon Watch. Ending the subsidies “would have resulted in immediate and massive increases in the prices of all basic goods and services, creating an excessive burden on Ecuador’s poorest populations,” he wrote.

The protests rocked the capital of Quito and even forced Moreno to move his government to the coastal city of Guayaquil. Seven people died, more than 1,300 were injured and 1,152 were detained, according to official numbers reported by BBC News.

The protests also majorly disrupted Ecuador’s oil production, the Associated Press reported further. Because of protests at oil fields in the Amazon, the country’s production more than halved, falling from 430,000 to 176,029 barrels a day.

In exchange for the government withdrawing Decree 883, indigenous leaders will call for an end to the protests. The two groups will then work to draft a new agreement to reduce government debt and spending.

BREAKING NEWS: @Lenin accepts indigenous movements’ demand to reinstate fuel subsidies. Indigenous leaders call for the end of protests in Quito and around the country as further dialogue will continue in order to address the rest of indigenous demands. pic.twitter.com/NAjoeREJJq

While thousands of non-Indigenous Ecuadorians also participated in the protests, the Indigenous community was widely credited with the win.

“More than a celebration it is an appreciation of the indigenous people who represented us and helped because this is a win for everyone,” Quito resident Cristina Vasquez told Reuters, as BBC News reported.

The Associated Press noted that the victory strengthens the Indigenous movement relative to the government in Ecuador. Indigenous protests have historically played a major role in the country’s politics, toppling three governments since the 1990s, according to BBC News. But the movement had been weakened by former President Rafael Correa, who restricted protests and jailed leaders, The Associated Press said.

“I think they’ve taken back a political space that had practically disappeared under Correa,” Santiago Basabe, an analyst at the Latin American Institute of Social Sciences in Quito, told The Associated Press. “They’ve shown the country that they’re here and they’re a force to be reckoned with.”

Take a glimpse into the past 11 days of indigenous-led demonstrations which have swept the country!

Indigenous leader Leonidas Iza, a member of the Panzaleo Quichua group, told the Associated Press that the country could even see an Indigenous president in the near future.

“It’s not a dream, it’s a reality that we can take on,” Iza said. “What we have proposed to the Ecuadorian people, even though we’re not government officials, is that we need to construct a new economic model that’s really decided on by the Ecuadorians.”

According to Koenig, a win for this Indigenous movement would also be a win for the environment.

“The indigenous uprising against austerity measures and new oil and mining extraction is a call for a new model of development, similar to a Green New Deal, that puts Indigenous rights, life plans, and solutions at the forefront, along with other visionary concepts guaranteed by their constitution, including the rights of nature and (buen vivir) which all lay the groundwork for a just transition to a post petroleum economy,” he said.