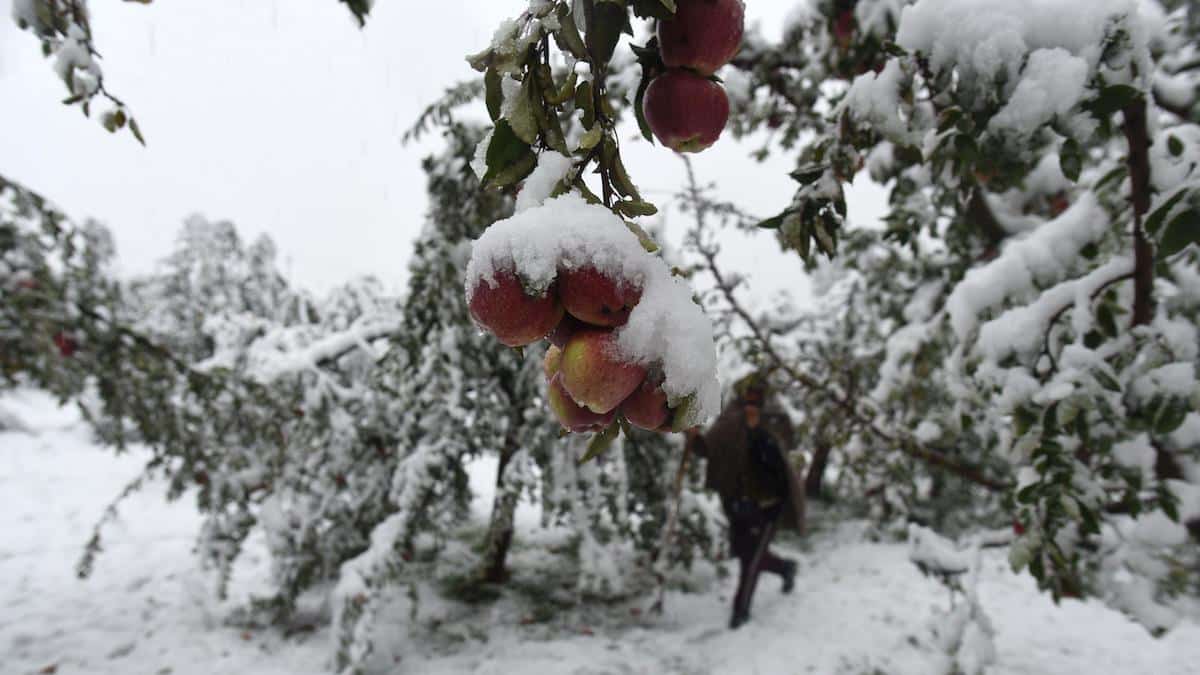 In another example of how the climate crisis threatens agriculture around the world, early snowfall has damaged Kashmir’s apple harvest for the third year in a row.

The Kashmir valley is located between the Greater Himalayas and the Pir Panjal mountains. It is responsible for nearly 80 percent of India’s apple crop, but this may be changing. Early snowfalls this year have destroyed up to half of harvests in the valley, The Guardian reported Wednesday.

“In the light of the changing climate, apple harvesting is not sustainable [here],” University of Kashmir assistant professor Dr. Irfan Rashid told The Guardian. “Usually, Kashmir receives the snowfall after 15 December, but over the last two decades, we are experiencing early snowfalls. The harvest time for many apple varieties is November. In the last five years, we have had three erratic snowfalls and in the future the situation may exacerbate.”

Weather patterns have been changing gradually in the valley for 20 years, but those changes accelerated in the last five. Rashid co-wrote a paper published in 2020 which looked at the impacts of early snowfalls in November 2018 and November 2019. The wintry weather either severely or mildly damaged nearly a third of the valley’s orchards, and the affected orchards lost between four and 50 percent of their crop, with average losses of 35 percent.

All of this added up to an economic loss of five billion rupees in 2018 and 22.5 billion rupees in 2019, which saw the region’s heaviest snowfall in 60 years. Officials are still working to calculate the total losses this year, but for the farmers directly affected, the loss is already clear.

“The snow has ruined us,” widow and mother of two Noor Jehan told News 18 after a late October snowfall. “My kids afford education only because we grow apples. This year we are going to suffer. We depend on the proceeds of the orchard.”

Another farmer, Aamir Hussain, said that 10 of his 70 trees cracked in the snow and another 15 had lost or damaged branches.

“I was devastated by the sight of the broken branches and fallen off apples. The snow was falling heavily. I stood there watching helplessly,” Hussain told News 18.

One potential solution promoted by Kashmir’s department of horticulture is to switch to imported “high density” apple varieties that have earlier harvest dates, according to The Guardian. Research has suggested that this could be a profitable solution despite the initial costs of replacing existing varieties. However, farmers have been hesitant to shoulder those costs, and Rashid said it could lead to the loss of local apple varieties.

“Already, the local varieties like ambri are shrinking,” he said.