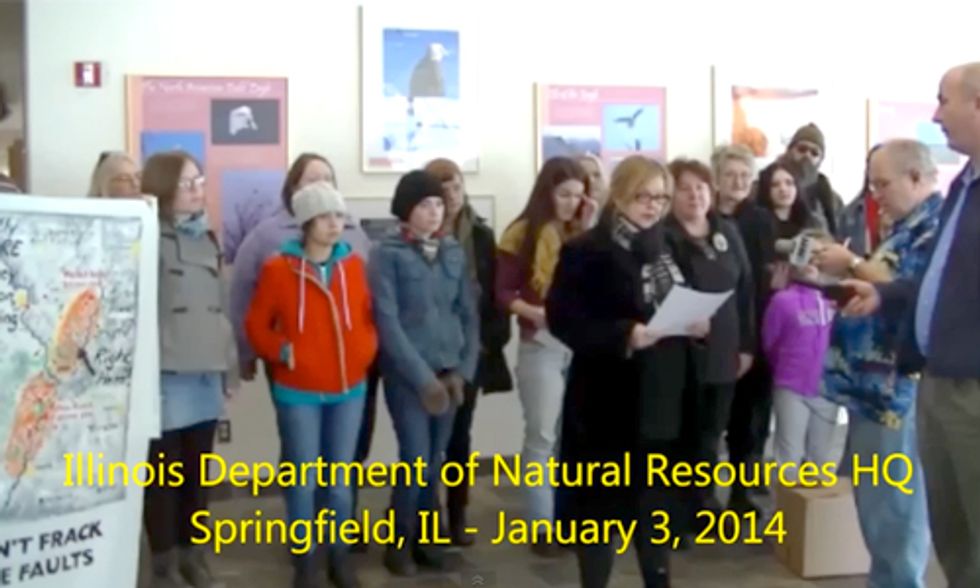 An Illinois ban on fracking is inevitable. The question is whether it will happen before or after a major fracking disaster.

The public comment period on Illinois' draft regulations ended Jan. 3 with groups in potentially impacted areas repeating their call for a ban on fracking. A group of southern Illinois residents representing several grassroots groups drove to Illinois Department of Natural Resources (DNR) headquarters in Springfield to join with Frack Free Illinois in delivering comments on the regulation and a petition asking Gov. Quinn to oversee a rewrite.

Tabitha Tripp, of Anna-Jonesboro, said in a statement, "These inadequate rules will leave nothing but legacies of disasters to those who voted on this irresponsible law and abandon Illinois tax payers who will indeed foot the bill for public health issues like cancer and leukemia."

The regulation will likely be improved before being presented to the General Assembly's Joint Committee on Administrative Rules for final approval. Even groups who supported the law are objecting to the DNRs' flaccid follow up. A few politicians will claim a victory for the environment after DNR makes marginal changes. But, the real weakness in the rules follows from the inadequacy of the law itself.

The law does not address the consequences of a tornado hitting a fracking site. It does not resolve the release of chemicals in a major flood, despite the fact that fracking will likely happen in floodplains of a region bordered by two of the highest volume rivers in America. The law provides for monitoring, but not preventing, fracking induced earthquakes despite the fact that fracking is expected along major fault lines. If a large groundwater source, such as the Mahomet aquifer, is depleted or contaminated it could impact the water supply of hundreds of thousands of people.

A long list of other omissions in the law may be less dramatic but will be just as dangerous. For example, there's no provision for monitoring air emissions at fracking sites, which a University of Colorado study linked to chronic health problems for those living nearby. The DNR is allowed to waive fines that are already too low, and issue new permits to repeat offenders.

When pushing for the law, Gov. Quinn claimed it will protect the environment. That was a lie.

Some lead movers behind the law are usually environmental allies, such as chief Senate sponsor Mike Frerichs, Green Caucus Chair Ann Williams and Majority Leader Barbara Flynn Currie. It's surprising that a blue state with a supposedly environmental Governor and large Democratic majority in the legislature voted to launch a fracking boom. For now, they can justify their action by claiming it's a strong law. It will be more difficult to defend themselves after a serious incident disproves their claim.

It's inevitable that one or more disasters will eventually happen with alarming consequences. When it does, Gov. Quinn and the other fracking hypocrites in the legislature will face a changed political reality as they scramble to save face by passing a ban.

Many Illinois residents want the state to proactively ban fracking instead of waiting to react after disaster strikes. MoveOn.org recently announced a Fracking Fighters small grant program and I was lucky enough to be one of 100 selected. As part of my project, I'm launching a petition to ban fracking in Illinois.

Now that a basement level of basic protections are on the books, Illinois has the opportunity to be a a national leader by taking the next step in showing the only way to reliably protect people from the consequences of fracking is to ban it.