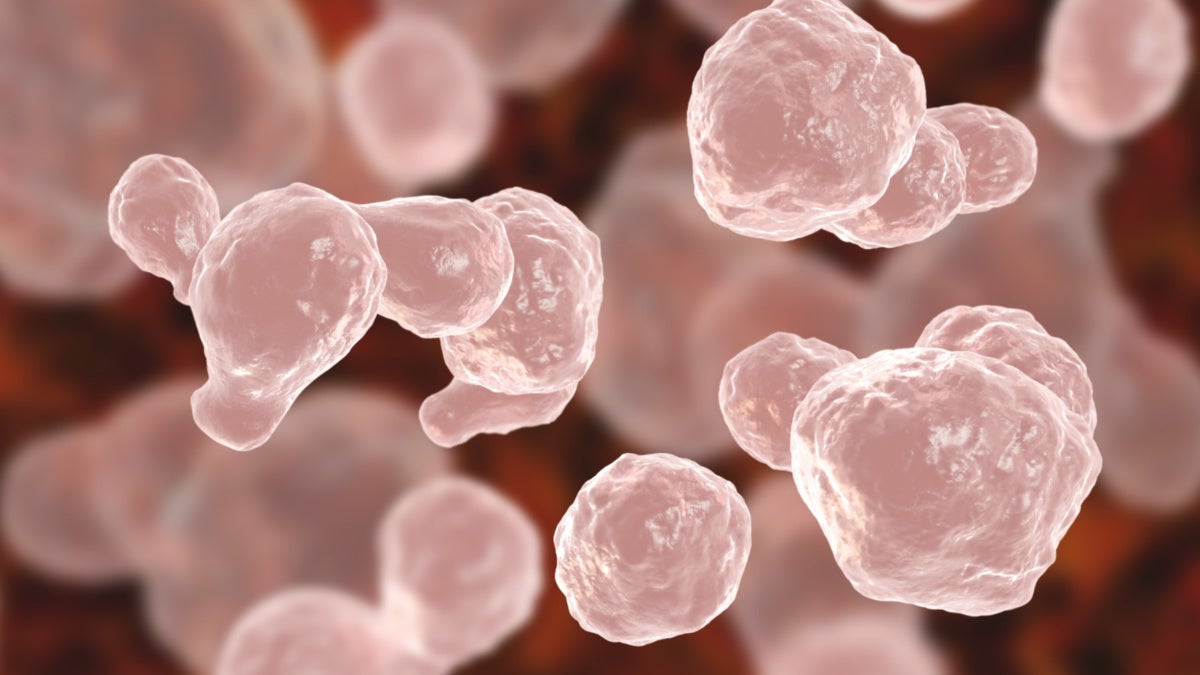 Cryptococcus yeasts (pictured), including ones that are hybrids, can cause life-threatening infections in primarily immunocompromised people. KATERYNA KON/SCIENCE PHOTO LIBRARY / Getty Images

From the mythical minotaur to the mule, creatures created from merging two or more distinct organisms – hybrids – have played defining roles in human history and culture. However, not all hybrids are as fantastic as the minotaur or as dependable as the mule; in fact, some of them cause human diseases.

We are evolutionary biologists who are trying to understand why certain fungi infect hundreds of thousands of patients each year while others are harmless. We are particularly interested in infections caused by Aspergillus fungi, a group of molds – multicellular fungi that typically grow by forming networks of hairlike filaments – that can cause very serious infections in patients with weak immune systems. While examining Aspergillus strains isolated from patients with lung-related diseases, we unexpectedly discovered an Aspergillus hybrid that infects humans. This finding is significant not only because this is the first known example of a hybrid mold infecting humans but also because accurate identification of the species causing disease is key for managing fungal infections.

When Looking Through a Microscope Isn’t Close Enough.

For the last few years, our team at Vanderbilt University, Gustavo Goldman’s team at São Paulo University in Brazil and many other collaborators around the world have been collecting samples of fungi from patients infected with different species of Aspergillus molds. One of the species we are particularly interested in is Aspergillus nidulans, a relatively common and generally harmless fungus. Clinical laboratories typically identify the species of Aspergillus causing the infection by examining cultures of the fungi under the microscope. The problem with this approach is that very closely related species of Aspergillus tend to look very similar in their broad morphology or physical appearance when viewing them through a microscope.

Interested in examining the varying abilities of different A. nidulans strains to cause disease, we decided to analyze their total genetic content, or genomes. What we saw came as a total surprise. We had not collected A. nidulans but Aspergillus latus, a close relative of A. nidulans and, as we were to soon find out, a hybrid species that evolved through the fusion of the genomes of two other Aspergillus species: Aspergillus spinulosporus and an unknown close relative of Aspergillus quadrilineatus. Thus, we realized not only that these patients harbored infections from an entirely different species than we thought they were, but also that this species was the first ever Aspergillus hybrid known to cause human infections.

Hybrid fungi that can cause infections in humans are well known to occur in several different lineages of single-celled fungi known as yeasts. Notable examples include multiple different species of yeast hybrids that cause the human diseases cryptococcosis and candidiasis. Although pathogenic yeast hybrids are well known, our discovery that the A. latus pathogen is a hybrid is a first for molds that cause disease in humans.

(Left) Candida yeasts live on parts of the human body. Imbalance of microbes on the body can allow these yeasts, some of which are hybrids, to grow and cause infection. (Right) Cryptococcus yeasts, including ones that are hybrids, can cause life-threatening infections in primarily immunocompromised people. Centers for Disease Control and Prevention

Why certain Aspergillus species are so deadly while others are harmless remains unknown. This may in part be because combinations of traits, rather than individual traits, underlie organisms’ ability to cause disease. So why then are hybrids frequently associated with human disease? Hybrids inherit genetic material from both parents, which may result in new combinations of traits. This may make them more similar to one parent in some of their characteristics, reflect both parents in others or may differ from both in the rest. It is precisely this mix and match of traits that hybrids have inherited from their parental species that facilitates their evolutionary success, including their ability to cause disease.

The Evolutionary Origin of an Aspergillus Hybrid.

Multiple evolutionary paths can lead to the emergence of hybrids. One path is through mating, just as the horse and donkey mate to create a mule. Another path is through the merging or fusion of genetic material from cells of different species.

It is this second path that appears to have been taken by our fungus. A. latus appears to have two of almost everything compared to its parental species: twice the genome size, twice the total number of genes and so on. But unlike other hybrids, which are often sterile like the mule, we found that A. latus is capable of reproducing both asexually and sexually.

But how distinct were the parents of A. latus? By comparing the parts contributed by each parent in the A. latus genome, we estimate that its parents are approximately 93% genetically similar, which is about as related as we humans are with lemurs. In other words, A. latus, an agent of infectious disease, is the fungal equivalent of a human-lemur hybrid.

How A. Latus Differs From its Parents.

Elucidating the identity of closely related fungal pathogens and how they differ from each other in infection-relevant characteristics is a key step toward reducing the burden of fungal disease. For example, we found that A. latus was three times more resistant than A. nidulans, the species it was originally identified as using microscopy-based methods, to one of the most common antifungal drugs, caspofungin. This result provides a clear example of the potential importance of accurate identification of the Aspergillus pathogen causing an infection.

We also examined how A. latus and A. nidulans interact with cells from our immune system. We found that immune cells were less efficient at combating A. latus compared to A. nidulans, suggesting the hybrid fungus may be trickier for our immune systems to identify and destroy.

So, when it comes to hybrids, some are fantastic (the minotaur), some are helpful (the mule) and some are dangerous (Aspergillus latus). Understanding more about the biology of Aspergillus latus may help in our understanding of how microbial pathogens arise and how to best prevent and combat their infections.