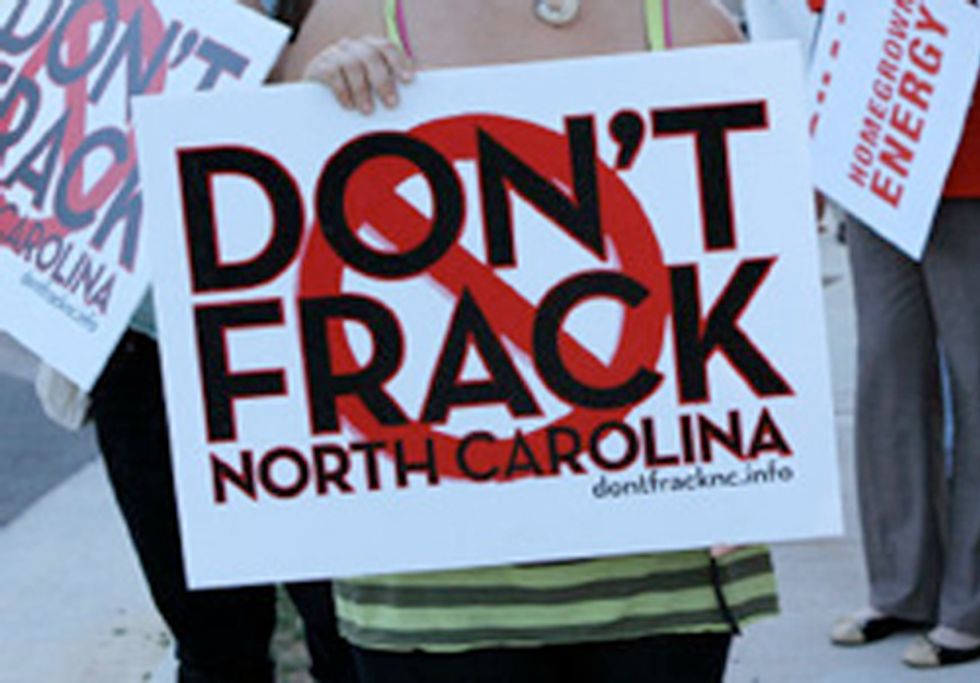 Late last night, the North Carolina GOP-led House voted to legalize fracking throughout the state by overriding Gov. Bev Perdue's veto of Senate Bill 820. The vote was 72-47, exactly the votes needed for an override. However, Rep. Becky Carney (D-Mecklenburg) says she did not intend to cast the key vote that overrode the governor's veto.

According to WRAL.com, Carney said, "It is late. Here we are pushing to make these kind of decisions this time of night." Carney pointed out that she has voted against fracking in the past, and said she spent the day lobbying other Democrats to uphold the veto of Senate Bill 820, but by accident when that bill came up for a vote she pushed the green button voting for the veto. Carney tried to get the attention of the Speaker Thom Tillis, but he would not recognize her and as soon as the vote was cast, House Minority Leader Paul Stam used a procedural move called a "clincher" to ensure the veto override could not be reconsidered.

“It's disappointing that the House leadership took advantage of a procedural error to override the governor's veto. Our drinking water has now been put at risk—even though the required three-fifths of the members did not want to override," said Molly Diggins, state director of the North Carolina Sierra Club.

"How ironic that in an industry plagued with accidents, hydraulic fracturing or “fracking” today become legal in North Carolina based on an accidental vote.”

Following the Senate vote, Gov. Perdue said, "It's disappointing that the leaders in General Assembly would allow fracking without ensuring that adequate protections will be in place for drinking water, landowners, county and municipal governments, and the health and the safety of families in North Carolina. I hope the General Assembly will revisit this issue and strengthen the safeguards before fracking begins."

"The bill that passed last night won't allow fracking permits to be issued for at least two more years," said Donna Lisenby, board member of Waterkeepers Carolina and Upper Watauga Riverkeeper. It requires the creation of rules and regulations to address the undeniable toxicity and danger of fracking to NC communities, property owners and water supplies."

"After those fracking rules have been created, they must come back to the NC General Assembly for another vote. A lot can happen in two years. The NC environmental community is united and committed to fighting any rule or regulation that does not protect the people and environment of our state," continued Lisenby.

The mistake vote by Carney wasn't the only surprise with last nights vote. Rep. Susi Hamilton (D-New Hanover), who signed a letter last week asking Gov. Perdue to veto the fracking bill, voted Monday night with the GOP majority to override the veto and allow fracking in the state. Though it is not completely clear why Hamilton had a change in vote, some believe it has to do with the $60 million film tax credit that was slipped into a bill Monday night that could have a significant impact on Hamilton's district.

"The fact that the NC House was only able to achieve an override of the fracking veto by offering a $60 million deal to one representative and because of an incorrect vote by another representative is a very good sign. This fight is far from over. Waterkeepers in North Carolina will hold that future vote over the rule making process like a Sword of Damocles. We will be fully engaged in the rulemaking process and if those rules are not protective enough of our citizens and our waterways, we will activate our grassroots networks and do everything we can to kill the bill. We look forward to the next two years of fighting for the protection of our communities," Lisenby said.

The House vote came the day after Gov. Perdue's announcement on July 1 that she had vetoed the controversial, Republican-backed proposal to legalize fracking throughout the state due to its lack of sufficient protections for the public and the environment, and the Senate vote on July 2 overriding Perdue's fracking veto by a margin of 29 to 13.