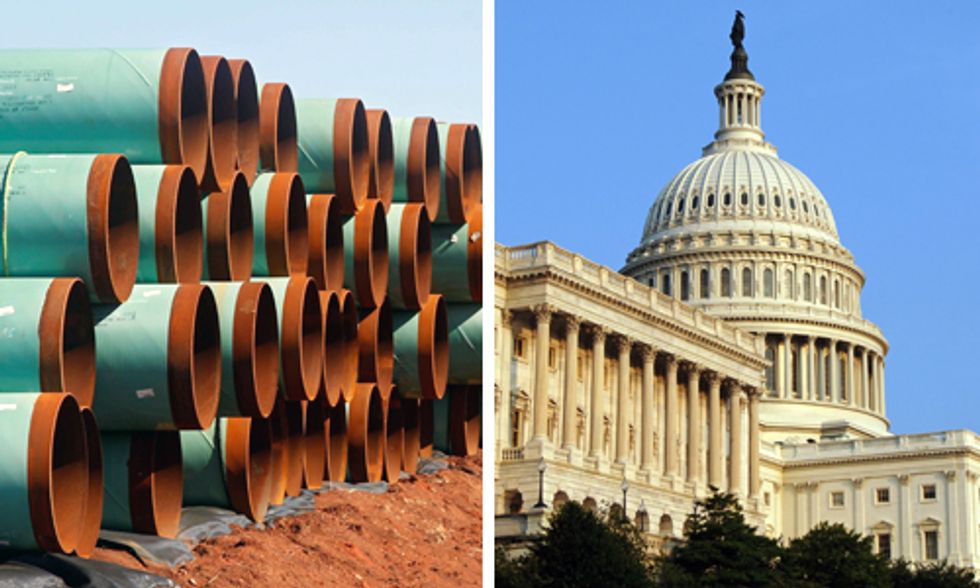 In a move that surprised exactly no one, the Republican-dominated U.S. House of Representatives voted today for the tenth time to approve the construction of the Keystone XL pipeline. Following a short floor discussion that reiterated all the familiar arguments pro and con, the House voted 266-153 in favor of the project.

The vote took place only four days after the current session opened, rejecting pleas from some Democrats to give the matter more consideration. But it's not like the result was ever in doubt; with an enhanced Republican majority in the House, it passed by an even bigger margin that in the previous votes.

"The only folks who think the first major act of Congress should be to force approval of the Keystone XL tar sands pipeline are those in the pocket of oil and gas billionaires," said Sierra Club executive director Michael Brune. "That explains why 266 members of the House voted to try and do just that. Big polluters are getting the Congress they paid for, and they are now trying to make everyone else pay the price."

On the Senate side, the Energy and Natural Resources Committee approved the pipeline by a vote of 13-9 and passed it on to the full Senate for a vote. Senator majority leader Mitch McConnell, who has said repeatedly that approving the pipeline would be his first priority in the new Congress, said that a cloture vote will take place Monday night. With 60 sponsors, the bill will easily clear that hurdle and go on for a guaranteed-to-pass vote, following its failure to pass the Senate in November by one vote. It will then be the first item that the new Congress sends to President Obama to sign, which he's indicated lately that he would veto the bill.

Stirring up the rhetoric on the already heated issue, the Nebraska Supreme Court this morning failed to find in favor of local landowners trying to block the state from implementing the route chosen by TransCanada, the company building the pipeline. Obama has given as one of his reasons—pipeline supporters' coordinated talking point today is that this was an "excuse" rather than an actual reason—that the Nebraska court case was pending. But it was far from the only reason he's offered in recent weeks. The State Department review of the project is still pending and concerns about its environmental impacts remain.

"We take risk to our lands, the American people face threats to their health, and TransCanada gets to reap the rewards," said Arizona Congressman Raul Grijalva, co-chair of the Congressional Progressive Caucus. "That's not a winning formula for our country or the economy."

And despite the Nebraska ruling, it appears Obama is still not inclined to let the Keystone XL project proceed.

"Regardless of the Nebraska ruling today, the House bill still conflicts with longstanding executive branch procedures," said White House spokesman Eric Schultz. "If presented to the president, he will veto the bill."

While an additional three Democrats are said to support the bill in addition to its 60 sponsors, the Senate would need 67 votes to override the President's veto.

"Given that it will never become law, this legislation only serves to remind us of just how out of whack Congressional Republicans’ priorities are with what the American people actually want,"said the Stop Dirty Tar Sands Coalition in a statement. "Rather than wasting time on meaningless legislation to do the bidding of one foreign oil company, Congress should be getting to the real work of taking action on climate and transitioning the United States to a clean energy future."