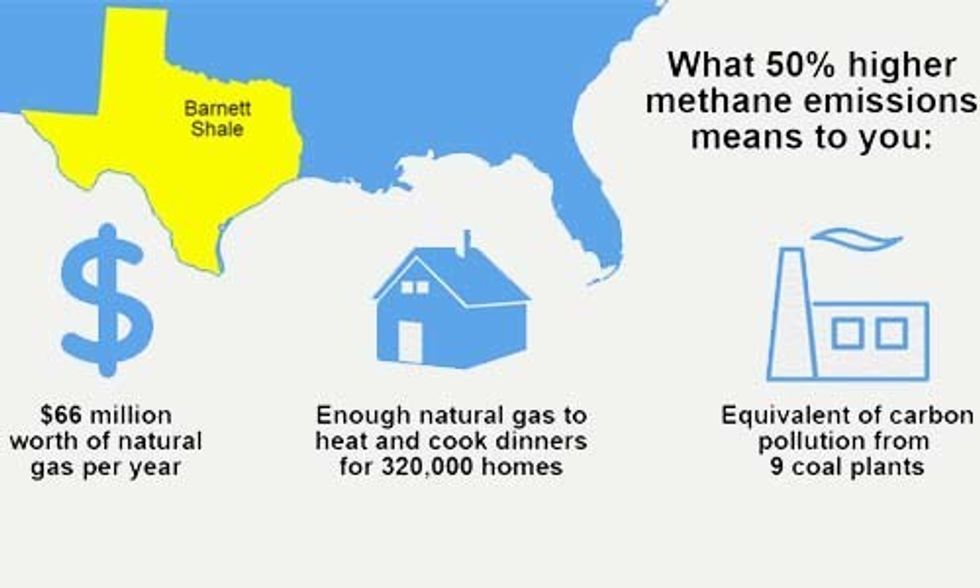 A new set of peer-reviewed scientific papers pointing to 50 percent higher than estimated regional methane emissions from oil and gas operations in Texas were published this week. And like clockwork, the oil and gas industry’s public relations machine, Energy In Depth (EID), proclaimed that rising emissions are actually falling, and that the industry’s meager voluntary efforts are responsible.

This is, of course, wrong on both counts. In fact, it’s a willful misrepresentation of the findings.

Methane is the main ingredient in natural gas and a powerful greenhouse gas.

First, the assertion that emissions are going down is flat wrong. The U.S. Environmental Protection Agency’s (EPA) latest inventory released in April reports that in 2013 the oil and gas industry released more than 7.3 million metric tons of methane into the atmosphere from their operations—a three percent increase over 2012—making it the largest industrial source of methane pollution. So much for those voluntary efforts.

But EID also fumbles the two main findings of the studies: First, that traditional emissions inventories underrepresent the magnitude of the methane problem by 50 percent or more; and second, that this undercount is primarily due to relatively small but widely distributed number of sources across the region’s oil and gas supply chain, coming from leaks and equipment malfunctions not currently accounted for in the emission inventories everyone has been pointing to. In short, the Barnett papers tell us there’s a pervasive but manageable pollution problem occurring across the entire supply chain that requires a comprehensive, systematic monitoring effort and effective repair regime to address it.

Regulators in Colorado understood this to be the case, which is why Colorado took steps to adopt state-wide leak detection and repair requirements for oil and gas operations last year, and why Wyoming and Ohio have also taken first, important steps in this direction. The Barnett papers confirm the importance of these regulatory efforts and suggest that requirements to find and fix leaks across the oil and gas industry are a national priority.

The good news is that reports indicate once you find these sources, they’re fairly cheap and easy to fix. And it is important to do so. Methane is the main ingredient in natural gas and a powerful greenhouse gas and many of the leaks and malfunctions lead to emissions of other air pollutants that contribute to local air quality problems besides.

An Ounce of Prevention

Fire prevention offers a good way to think about this. Fires are relatively rare, and occur unpredictably. And just a few do real damage. But that’s an argument in favor of a broad and vigilant solution: Smoke detectors in every home; regular safety inspections for large buildings; and sprinkler systems and firefighters to stop small situations from becoming big ones.

The same type of ongoing fire prevention measures keeping people safe in office buildings around the country is needed to stop this methane and associated air pollution that is harming communities near oil and gas development.

In the Barnett alone, we’re talking about a volume of methane emissions equal to $66 million per year in wasted product. Also enough gas to meet the heating and cooking needs of roughly 320,000 homes and to deliver the equivalent climate benefit of cutting emissions from nine coal plants over the next 20 years. Clearly, these are not insignificant numbers, as EID suggests. Instead, it shows how meaningless percentage points are without proper context.

Industry often points out it can be trusted to reduce methane emissions, and that regulation is not needed. But the sub-one-percent participation rate in EPA’s voluntary Natural Gas Star proves otherwise.

We don’t have any doubt that industry could manage this problem more effectively, without undue hardship or cost. But as with fire safety, there’s no evidence it will happen without proper regulations requiring every oil and gas facility to do what needs to be done, and that no one among the thousands of oil and gas producers, gatherers, or pipeline operators can derive a competitive advantage from cutting corners. Only consistent national rules can ensure that companies have a level playing field and people have the vital protections they deserve.