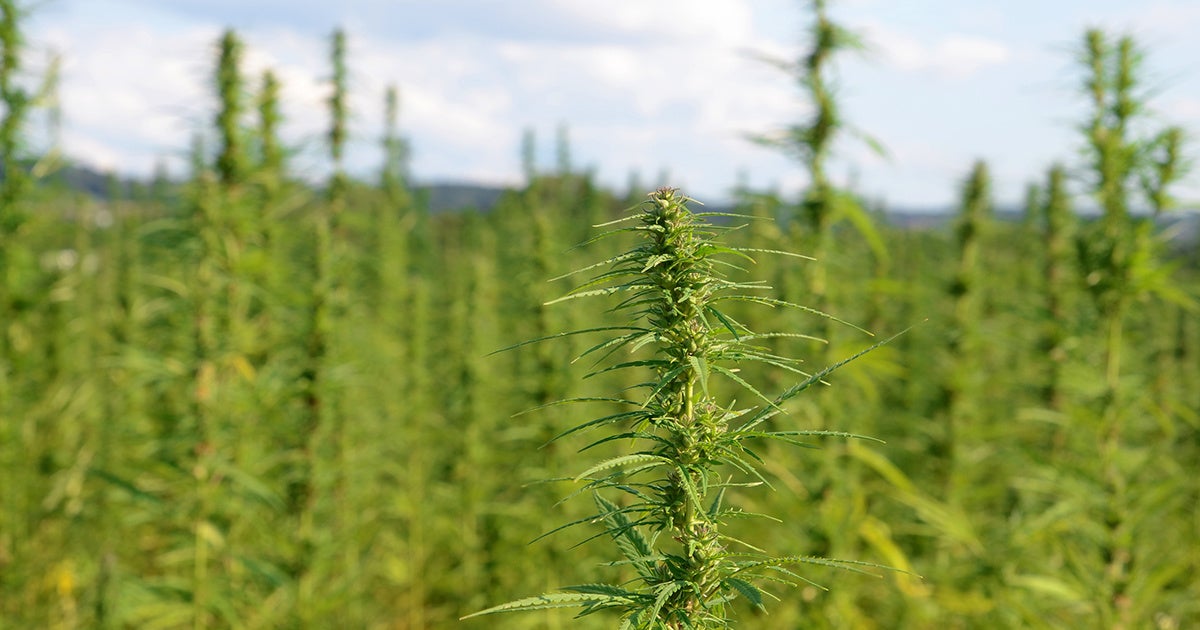 With low grain prices and the loss of the soybean exports to China because of a trade war, Iowa’s farmers face dark times. But one Iowa farmer sees a light of hope with a crop that fell out of favor, but may be poised for a big comeback. Ethan Vorhes, a farmer in Charles City, Iowa sees great potential for growing industrial hemp.

“It’s a perfect storm for revitalization of not only of Iowa, but America,” said Vorhes, who is director of the Iowa Hemp Association.

Vorhes refers to language in the 2018 Farm Bill that would allow farmers to grow hemp in the U.S. after it had been banned for nearly 50 years because of its association with its closely related plant, marijuana. He also sees great potential because hemp can be processed into a multitude of products—from natural supplements and foods to fiber for making everything from clothing to high-tech materials.

“I think it would be a really good thing if we brought it to Iowa,” said Vorhes who plans to use hemp as feed for his specialty Wagyu beef cows.

Hemp has been grown in the U.S. since the early 1600s when the first European settlers arrived. It was grown to make fiber for rope, fabric and paper, among other uses. The Declaration of Independence was drafted on hemp paper. The “Hemp for Victory” campaign during World War II encouraged production of the crop for the war effort. But in 1970, the Controlled Substances Act classified hemp as marijuana making it illegal to grow in the U.S.; this despite the fact that hemp has a negligible amount of THC, the psychoactive compound that gives marijuana users a high.

Hemp’s comeback began in 2014 when a provision in the 2013 Farm Bill defined industrial hemp as distinct from marijuana and allowed universities and state agriculture departments to conduct hemp research programs. This allowed licensed farmers to grow hemp.

In 2017, more than 25,000 acres of hemp were grown in 19 states, a 163 percent increase over 2016. The number of acres “will be greatly expanded this year,” said Erica McBride, executive director of the National Hemp Association, who adds that 39 states have passed some form of legislation to allow limited hemp production.

Kentucky has played a central role in hemp’s revival. The state’s U.S. Senator and Senate Majority Leader Mitch McConnell and Congressman James Comer have led legislative efforts, such as the 2013 Farm Bill provision, to bring hemp production back.

Kentucky led the U.S. in hemp production until the late 1800s before it was replaced with tobacco. Now with tobacco production falling, Kentucky farmers are considering hemp as an alternative.

John Bell, an organic farmer in Scott County, Kentucky, is licensed to grow hemp. His grandfather grew the crop during the 1940s.

“Hemp has a history of growing in Kentucky. It was grown for fiber everywhere,” said Bell, who grows hemp to produce cannabidiol (CBD) oil.

About 70 percent of the hemp grown in the U.S. today is used to make CBD oil, a popular natural remedy for pain, inflammation and anxiety.

Shawn Lucas, a certified crop adviser and assistant professor of organic agriculture at Kentucky State University, said Kentucky “grabbed the bull by the horns” with hemp production in 2014.

“We pride ourselves in that we got in early,” said Lucas who is conducting research on hemp production. “The potential is there. As tobacco production shrinks, hemp could be an option for farmers or a way to diversify their operations.”

Lucas said there are now 50 hemp processing facilities in Kentucky when there were none just a few years ago.

One of those processors is Victory Hemp based in Campbellsburg, Kentucky, which manufactures hemp seed oil, hemp protein powder and hemp seeds.

Hemp offers advantages to farmers. It has a track record of successful production in the U.S., and can be grown in all 50 states. It doesn’t need as much water as cotton, and it doesn’t need as many pesticides as corn and soybeans. It crowds out weeds and has a deep root system, which helps aerate the soil. It is also non-GMO and is being grown organically by some farmers.

Lucas said farmer interest in growing hemp is “huge,” but cautions: “Anyone getting into it needs to do homework, and needs a market for their crop.”

Potential markets for hemp are many. CBD oil is now the biggest market followed by hemp foods, including hemp seed, oil and protein.

Nutiva is one of the leading hemp food manufacturers in the U.S. and CEO John Roulac has been one of hemp’s leading advocates for nearly 20 years. In 2001, Roulac successfully sued the U.S. Drug Enforcement Agency to keep hemp-based foods legal in the U.S. Nutiva sells more than a dozen hemp-based products including oil, protein, and seeds, and they have the top-selling brand of hemp oil and seeds in the world.

Most of the hemp Nutiva uses is grown in Canada, but the company recently launched the first certified organic hempseed product grown in the U.S.

“Cannabinoids will become a new category of functional ingredients like probiotics, Omega-3, and flavonoids,” he said.

While CBD oil is now the biggest market for hemp, McBride predicts that will change.”Moving forward I anticipate that the fiber market will eventually exceed all other markets combined,” she said.

Uses for hemp fiber seem endless. It is used to make clothing like t-shirts, socks, jeans, sneakers and hats, as well as wallets, backpacks, American flags and, of course, rope. Several companies use hemp fiber composites to make car door panels for automakers like BMW. It is also used in construction as a building material and insulation. Hemp fiber can also be transformed into high-performance energy storage devices, according to research by Dr. David Mitlin of Clarkson University in New York.

Success of these markets hinges on Congress allowing hemp to be grown nationwide. Last March, McConnell introduced The Hemp Farming Act of 2018 to legalize hemp as an agricultural commodity and remove it from the list of controlled substances where it is now listed with marijuana. In June, the Senate passed its version of the 2018 Farm Bill with McConnell’s hemp legislation. Now the Senate must reconcile its version with the House of Representatives’ version. [Note: This process was underway at the time of publishing this article — Aug. 27.]

Hemp supporters are confident that Congress will legalize hemp. “There is strong bipartisan support and very little opposition in the House,” said Eric Steenstsra, president of Vote Hemp.

“There are not too many people in the political world that are really opposed to it,” Lucas said. “Hemp seems to be something to bring people together.”

Momentum for legalizing hemp farming got a big boost recently as California passed a bill that allows the state’s farmers to grow industrial hemp and produce hemp seed, oil, fiber, and extract.

Once hemp is legalized nationwide, some supporters see hemp growing into a major crop and industry.

“Once we get federally backed crop insurance there’s no reason this shouldn’t and won’t be on par with both corn and soybeans and grown on 60 million acres a year,” Rosen said.

“When it is said that hemp can be used to create over 25,000 different products that is not an exaggeration. Once the federal law changes to allow full commercialization there will be large investments into the infrastructure required to build the industry.”

Singer said legalization of hemp will be a “game changing event.”

“We need to remove the red tape and let farmers plant the seed,” Roulac said.