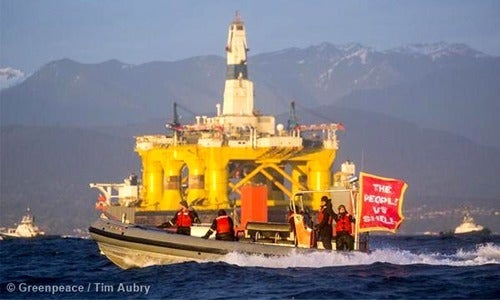 Shell plans to use Seattle’s port as a staging ground to drill in the Arctic this summer. But after thousands of people in Seattle and across the country spoke out in protest over Shell’s Arctic drilling plans, Seattle Mayor Ed Murray has declared that Shell’s plans “fall outside the current permit.” Shell must now apply for new permits before setting up in Seattle. 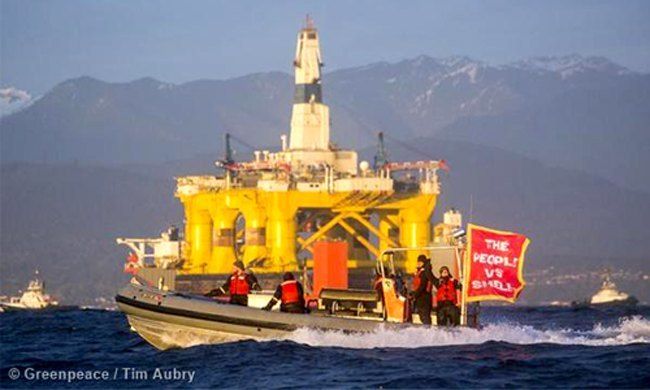 A Greenpeace boat flies a People Vs Shell banner near the Polar Pioneer, a 400-foot-tall rig leased by Royal Dutch Shell. The rig will be staged in Seattle before heading to the Arctic waters off Alaska if Shell gets permission to drill. Photo credit: © Greenpeace / Tim Aubry

Shell’s plans have received strong opposition across the country primarily because Arctic drilling isn’t just putting the Arctic in danger (although that would be bad enough). A study published in the journal Nature found that if we want to protect our planet from further catastrophic climate change, we need to keep Arctic oil in the ground.

If Shell’s rigs begin pumping oil and gas in the Arctic, the entire planet will be affected. And now that the Seattle Port Commissioners will be reviewing Shell’s new permits, an opportunity has opened for Seattle to delay Shell’s plans and remind the company that drilling in the Arctic is not worth it.

When the Port Commission first decided to allow Shell into Seattle during a closed-door meeting, Seattle’s residents—many of whom pride themselves on the city’s green image—were outraged. Thousands of people in Seattle and across the country stepped up—flooding the Port Commissioners with phone calls, kayaking out to meet Shell’s rigs, and gathering in the streets—all to tell Seattle rule-makers that Shell’s rigs don’t belong in Seattle ports.

The new permitting process could take weeks—and with the short drilling window in the Arctic, a few weeks could make all the difference. In the meantime, Seattle’s activists are busy urging people to contact the Port Commissioners and preparing their kayaks for Shell’s arrival.

You can take action here by telling the Seattle Port Commissioners to take a stand and keep Shell OUT of Seattle’s port.