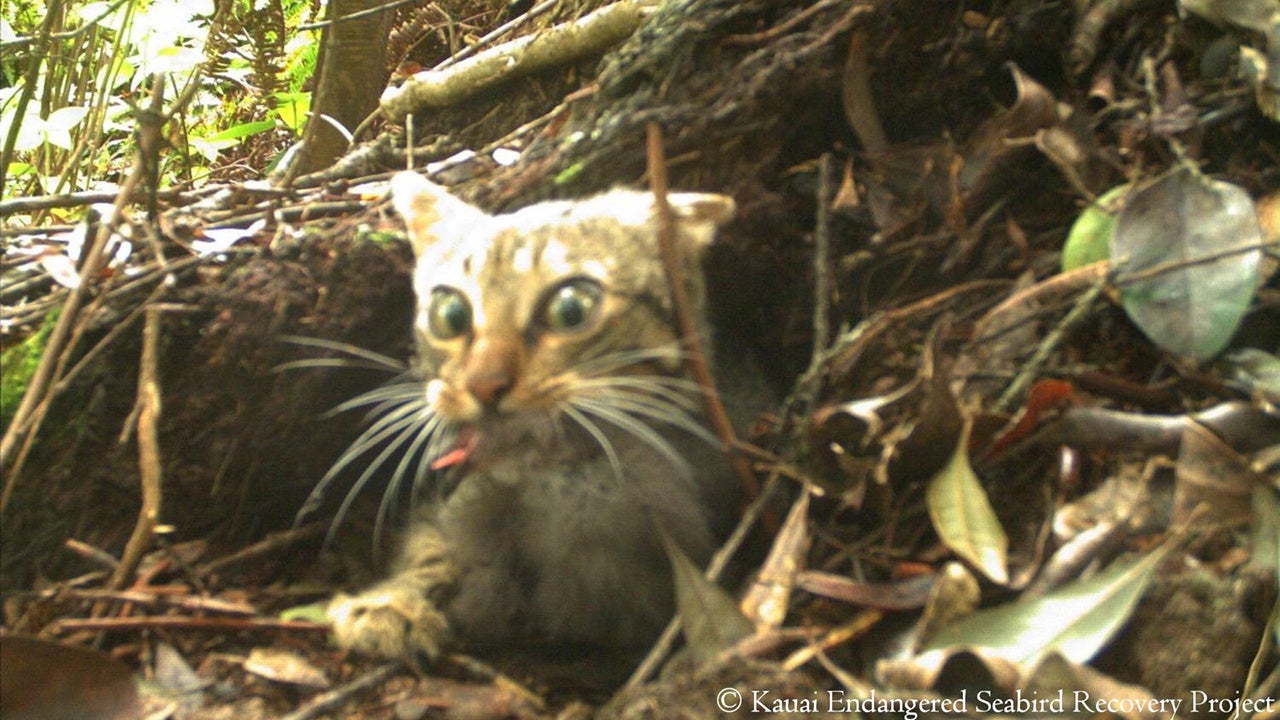 It takes a lot of effort and more than a little bit of luck for researchers like André Raine to get to the remote mountaintops of Kauai, where they’re working to save endangered Hawaiian seabirds from extinction.

First you need a helicopter capable of reaching sites more than 4,600 feet above sea level.

Then you need exactly the right weather to fly — and the hope that conditions don’t shift, as they frequently do.

“The weather’s not that great,” said Raine, the project coordinator for the Kaua’i Endangered Seabird Recovery Project. “We keep going and hanging out at the helipad, waiting and watching. And then it looks like it’s going to be okay but it gets fogged in, or you get up there and then you get stuck. The joys of working in a remote, inaccessible area.”

The seabirds — including Newell’s shearwaters (Puffinus newelli) and Hawaiian petrels (Pterodroma sandwichensis) — obviously have a much easier time getting up the tops of these mountains.

So, unfortunately, do several species of invasive predators — including feral cats, black rats and feral pigs — that have put these ground-nesting birds, and so many other native Hawaiian species, on the fast track toward extinction.

“People are always really surprised by this,” Raine said, “but it doesn’t matter how remote the area, or how apparently inhospitable it is to predators like cats. You’re going to find cats and rats and pigs in these areas. There wasn’t a single site that we work in that doesn’t have all these predators, busy eating the birds.”

An endangered chick in the mouth of a feral cat. Courtesy Kaua’i Endangered Seabird Recovery Project

Like many island endemics, Hawaii’s bird species grew up without mammalian predators, so they’re ill-adapted to the teeth and claws that arrived with human society. The cats descended from housecats, while pigs escape from agricultural sites and rats descended from stowaways on ships.

That’s why the Kaua’i Endangered Seabird Recovery Project has spent the past nine years constructing fences and establishing other predator controls — work that is proving essential in giving these native birds a chance.

The first step in controlling predators is quantifying the threat.

According to a paper Raine and his colleagues published earlier this year in The Journal of Wildlife Management, introduced predators killed at least 309 endangered seabirds at six monitored breeding colonies between 2011 and 2017. That’s quite a blow for each of these endangered species.

“Newell’s shearwaters and Hawaiian petrels have suffered catastrophic declines over the last few decades,” Raine said. “Any chick that’s lost in the population is one that we can’t afford to lose.”

The researchers took on the sad task of collecting the dead and examining the wound patterns to determine which type of predator made the kill.

Rats, it turned out, killed the most — more than 50% of mortalities — usually from entering the birds’ rocky burrows and eating eggs and chicks. That dramatically slows recovery efforts, but the research shows that adult birds who’ve lost their chicks returned to the same burrows the following year to try again.

Pigs kill fewer birds — about 10% of all tracked mortalities — but they were the most destructive, digging up and taking out entire nests. “It’s literally like someone’s taken a hand grenade and stuffed it down the burrow and blown it up,” Raine said. “They just eat whatever’s inside.”

Cats were responsible for another 35% of known deaths, and Raine says the research shows those mortalities were the worst for the long-term health of the bird species. Cats target breeding birds, taking out not just the current generation but any hope of successive generations. The seabirds are very faithful to both their burrow sites and their mates, so if a cat takes out one parent the other might not breed again for several years, if at all. (Without predation, the researchers say an amazing 98.6% percent of breeding pairs matched up again and bred each year of the study.)

And while cats in general are the most destructive, some individual cats are downright scary.

“Every now and then, you get a sort of super cat, which is really good at finding burrows and killing the birds,” he said.

In one incident recounted in the paper, the seabird recovery team found images of a cat taken by nine out of 30 remote cameras on the same day. Each camera was trained at a different seabird burrow — which provided ready meals for the feral feline.

“It just shows that all you need is for a cat to get into an area for a very short period,” Raine said. “When the birds are sitting in a hole in the ground, they’re entirely vulnerable to predation. The cat can very easily wipe out a huge number of birds.”

Raine describes another incident as “quite horrific to watch.” It took place at a remote site the team can only visit about once a month during breeding season, “because it’s expensive and hard to get to,” he said. They arrived one day to review the site’s automatic cameras and the images revealed “this one cat just wreaking havoc across the site. It goes in and kills an adult Newell’s shearwater, and they next thing you know it’s emerging from the same burrow with four kittens. So it uses that burrow to raise the kittens, and then we get it on camera at another burrow with the kittens, basically training them how to kill more shearwaters.”

That’s a tough thing to see — especially when these researchers have followed the comings and goings at these burrows for years.

“You start to really empathize with these birds, because you’re watching them on the burrow cameras and you’re seeing all these amazing behaviors,” Raine said. “And we’re tracking them as well. We’re seeing that they make these incredible journeys to feed their chicks. Hawaiian petrels go towards the coast of Alaska, 11-14,000 kilometers on a feeding voyage, and then you go to the site and you find this bird that’s just been shredded by an introduced predator and the chicks left to starve to death. It’s quite hard to deal with.”

But as difficult and dangerous as these predators can be, the research also shows that the situation is far from hopeless.

Over the past decade, the Kaua’i Endangered Seabird Recovery Project and its many organizational partners have concentrated on establishing predator controls at six of their seven regularly monitored seabird breeding sites.

Again, this isn’t easy to accomplish in these remote, rarely visited locations. Materials must be flown in, ungulate-proof fences built, other traps set, and pig-hunting expeditions organized. All of it must be accomplished and maintained in precarious territory full of wet vegetation, narrow ridgelines and steep canyon walls.

To make things even more difficult, the human visitors must leave the habitat as undisturbed as possible.

“If you start making trails in these areas, then you’re basically just opening them up to the hordes of predators that are out there,” Raine says.

But the hard work pays off.

According to the paper, fences and other controls not only keep the invasive predators out, they give the birds the opportunity to thrive.

The research team used seven years data from the six sites, from before and after predator controls were established, and projected striking results for the future of the two seabird species.

The first model looked at what would happen to each site without predator controls. It was a disaster — mostly due to cats. “We ran that for 50 years, and we found that all of the colonies dwindle toward extinction.”

The paper, in what Raine acknowledges as gallows humor, calls this the CATastrophe model.

The second modeling approach incorporated data from successful breeding that took place after more extensive predator controls (fences and traps) were put in place. “We found that the populations increased over those 50 years,” Raine said. Under the model, which was based on 2017 population growth rates at sites with predator controls, most sites would see a 50-60% increase over the 50-year projection, while one site more than doubled.

“It really does show that if you remove the predators, the birds will begin to recover.”

This isn’t the be all and end all. Hawaiian seabirds face a laundry list of additional threats, including climate change, collisions with power lines, reduced fish populations at sea, and invasive plants that change forest compositions. The models don’t address those threats, which also require mitigation.

There’s also another introduced predator: barn owls. Hawaii introduced barn owls in the 1960s to control rats, but — as we’ve seen in so many other similar examples — they quickly became a new problem. Owls only killed 12 seabirds during the study, but Raine says these newest invaders pose an increasing threat that’s proven harder to control. You can build fences to protect birds, after all, but you can’t prevent other birds from flying over those protections.

But this research does prove that current management techniques to protect Hawaiian seabirds from their most pressing threats — cats, rats and pigs — really do work, and that they can be applied to more locations, even by private landowners who have birds on their properties. “Although we’ve got seven managed sites, there are other sites on the island where the birds are still hanging on, and there’s no reason to expect that these techniques wouldn’t be effective at other colonies.”

That’s important, because some of those additional sites are on the edge.

“We’re finding that these other sites are just going silent,” Raine said. “With no management on them, the birds just flit away.” The paper recommends predator-proof fences at all sites, as well as dedicated year-round funding for both seabird monitoring efforts and predator-control operations designed to specifically target the composition of animals at each location. The authors also suggest additional port biosecurity to prevent more invasive species from arriving, and possibly the targeted use of landscape-level toxicants to remove rats and cats.

In addition, Raine says, these techniques can be applied to other species and other island locations where invasive predators threaten ground-nesting birds.

Perhaps most importantly, the research helps show these conservationists — whose work has continued as “essential” during the pandemic — that their efforts to fight extinction in these challenging, hard-to-reach habitats are paying off.

“I remember one of our sites in particular — in fact the one I was trying to get into today — the first time I went there I found within a five-foot area a burrow that had been predated by a cat, a dead chick that had been pulled out by a rat, and a burrow that had been destroyed by a pig,” Raine recounted. “Now you can go a month without even seeing predators at some of these sites because of the great work that the controllers’ crews are doing.”

And this raises one more issue: this work isn’t just about birds. It may help heal Hawaii — the extinction capital of the world — in the process.

“I think it’s really important that people understand the critical importance of seabirds as the architects of the island itself,” Raine said. “They bring all those ocean nutrients up into the mountains, and their partly responsible for the watersheds that we all rely on. It’s a whole ecosystem that needs to be addressed.”