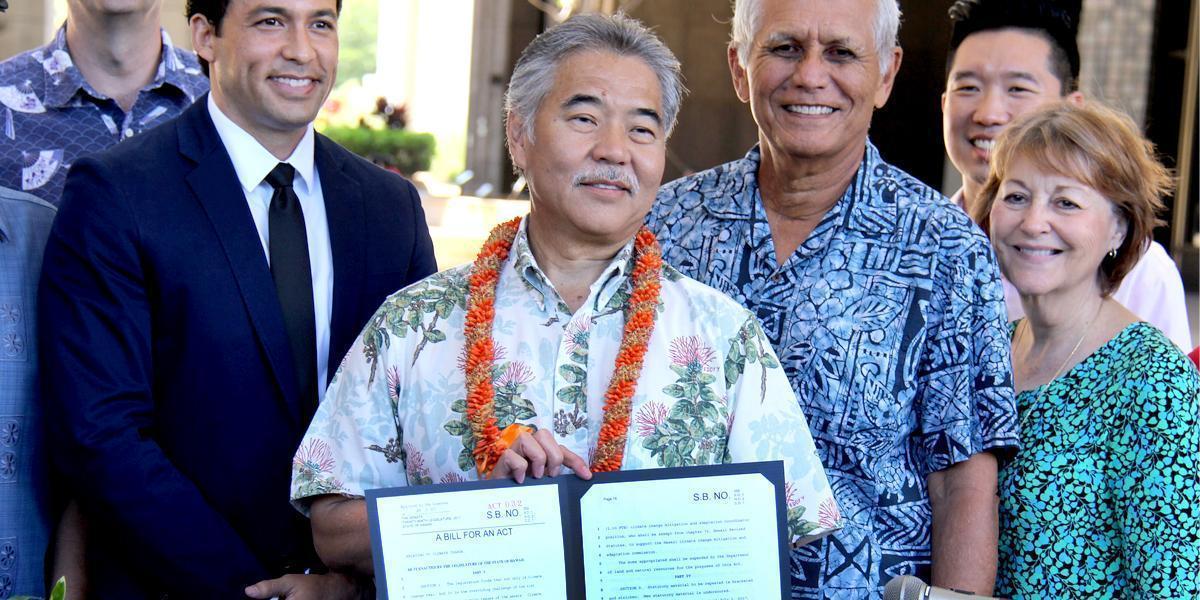 Hawaii is making our planet great again in the wake of President Donald Trump‘s controversial announcement last week that he’s pulling the U.S. out of the Paris climate agreement.

On Tuesday, Gov. David Ige signed two bills that formally enacted portions of the landmark climate pledge into law, making the Aloha State the first in the nation to legally support the global pact.

SB 559 “expands strategies and mechanisms to reduce greenhouse gas emissions statewide in alignment with the principles and goals adopted in the Paris agreement,” and HB 1578 “establishes the Carbon Farming Task Force within the Office of Planning to identify agricultural and aquacultural practices to improve soil health and promote carbon sequestration—the capture and long-term storage of atmospheric carbon dioxide to mitigate climate change.”

“Hawai’i is committed to environmental stewardship, and we look forward to working with other states to fight global climate change. Together, we can directly contribute to the global agenda of achieving a more resilient and sustainable island Earth,” Ige said in a statement. “The Hawai’i State Legislature understands the importance of taking action, and I applaud its work this session to ensure that we continue to deliver the island Earth that we want to leave to our children.”

Ige noted at the signing ceremony Tuesday at the state capitol that Hawaii is seeing the impacts of climate change first-hand.

“As an island state, we are especially aware of the limits of our natural environment. We see the impacts of our actions,” he said. “In this day and age, it is time for states and governors to lead.”

Ashley Lukens, the director of the Hawai’i Center for Food Safety, one of the groups that helped champion HB 1578, praised the governor’s actions.

“We are thrilled to see the state of Hawaiʻi investing in practices and people that promote a resilient and healthy climate, food and water future,” Lukens said. “President Trump may have pulled out of the Paris climate agreement, but Hawaiʻi is on the frontlines of climate impacts and we remain committed to action. Establishing a Carbon Farming Task Force is a major step forward on the path to a stable climate and secure food future, and we hope to see other states moving ahead regardless of Washington.”

An increasing number of states across the country are rebelling against President Trump’s withdrawal from the Paris accord, which was agreed upon by nearly 200 countries in 2015. California Gov. Jerry Brown, New York Gov. Andrew Cuomo and Washington Gov. Jay Inslee are assembling a coalition of states to challenge Trump.