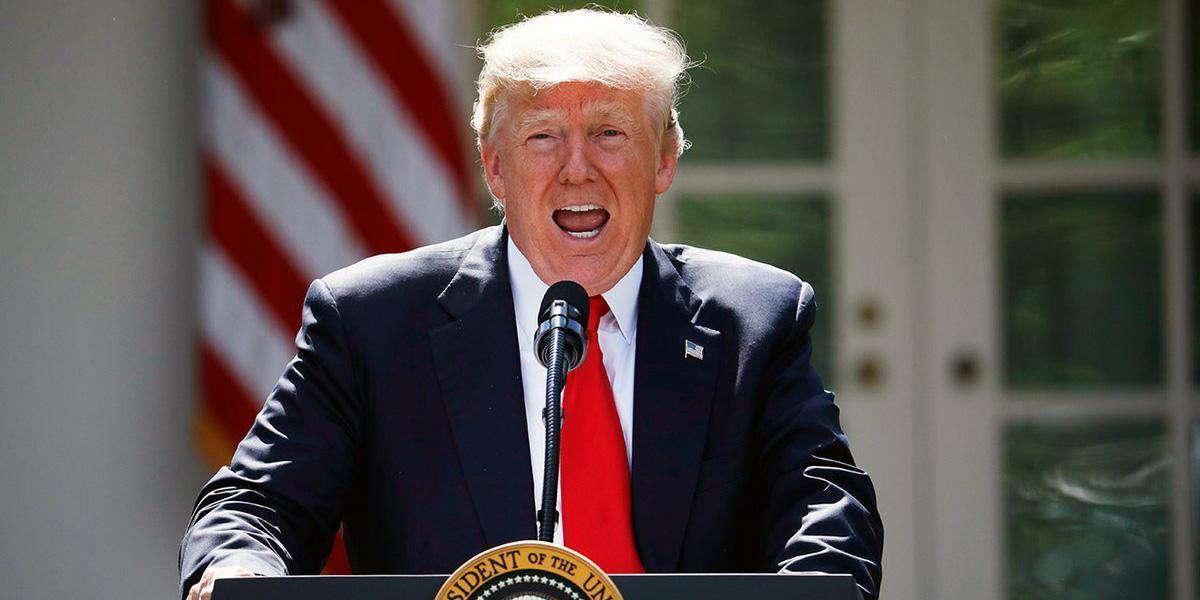 Donald Trump has done what Al Gore, Jim Hansen, climate scientists, the Sierra Club and the rest of the environmental movement could never do—make climate disruption breaking cable TV news. Trump’s histrionic, largely symbolic and recklessly self-destructive decision to abandon the Paris climate agreement means, among other things, that far more Americans know about the Paris climate agreement this morning than 24 hours ago. Never has climate dominated a news cycle as it did Thursday—even when the Paris agreement was signed by all of the world, (Nicaragua and Syria excepted).

Trump did this by providing the climate crisis with what it lacked—a single villain. He has now cast himself, for most of the global community, as a James Bond style villain, a Dr. No or Goldfinger, plotting global destruction for personal power and gain. But he is, in reality, President of the United States—not a character in a movie. And in the real world the response to villainy doesn’t come from a heroic special agent but through the collaborative response of a wide array of actors—other countries, U.S. cities, many of America’s most powerful states, and hundreds of businesses and civil society organizations.

Trump’s decision to abandon Paris has catalyzed, amplified and intensified this response. We actually, ironically, owe him a favor.

Let’s begin with the depressing decision, and then look at the hope we can all take from the resistance.

Trump’s decision to use the established process to exit Paris, but to remain in the underlying Rio Treaty on climate, means it will take four years for the U.S. to out—and the American people will have a chance to vote for the next President before we leave. So this announcement is largely symbolic. Trump also made clear that he would not honor the commitments President Obama made in his Paris pledge—but he was already busy undoing as many of those as he could. (Fortunately far fewer of these climate solutions than the media has implied are actually things Trump can reverse—we’re already half-way to meeting our Paris pledge and Trump can’t undo history). And since Paris is a coalition of the willing, not an enforcement based agreement, Trump was always free to walk away from our pledges and knew it.

So as a practical matter, withdrawing from Paris in 4 years will have no impact on U.S. climate emissions between now and 2025. Thursday’s announcement doesn’t give Trump a single additional tool to roll-back Obama’s climate legacy.

So why do it? Why alienate virtually the entire global community, and abandon America’s good standing as a diplomatic leader? Why let China and Germany step forward into our shoes? Why stiff more than 1,000 American businesses, including hundreds of the biggest, who begged Trump not to withdraw from Paris, including ExxonMobil and Chevron? Why make his climate denial such an embarrassingly big story?

It’s hard to know exactly what motivates President Trump. My guess, though is that he withdrew from Paris precisely because he needed to show his isolationist, America- first followers that he would walk away from a passel of treaties, and that he rejected diplomacy as a tool of global leadership—in a way that would have fewer real world repercussions than keeping his campaign promise to terminate North American Free Trade Agreement.

Trump ignored the fact that the Paris accord was, for the U.S., an unbelievably favorable deal, in which everything we agreed to do was something most Americans wanted to do anyway: replace outmoded, expensive and dirty coal power with cheaper, cleaner renewables; stop wasting valuable natural gas by letting it leak or be flared; provide motorists with cars and trucks and waste less fuel and go further on a dollar’s worth of gasoline; modernize our building stock to reduce utility bills and increase comfort; and replace climate destructive HFC refrigerants with modern, American developed safe alternatives.

His false and inflammatory remarks about the financial implications of the Paris agreement were clearly aimed at the minority of Americans who believe that global cooperation hurts the U.S., and displayed Trump’s usual callousness about what most Americans hear or think about him—in this case, they are reading once again he is just not telling the truth. (For example, U.S. support for the Green Climate Fund under Paris is a tiny fraction of the $100 billion Trump cited. And nothing in the Paris agreement hampers the U.S.’s ability to build any particular energy project it chooses).

But Trump’s entire campaign and Presidency have been premised on the notion that the passion of the minority which supports him will enable him to govern, even as the majority rejects his leadership—so this is nothing new.

What is new, however, is the intensity of the response. Many feared—and Steve Bannon hoped—that a U.S. withdrawal would create a domino collapse of global confidence in Paris. Instead it greatly solidified the commitment of Europe, China, Canada and India to filling the gap left by American withdrawal, while isolating and marginalizing the U.S. in other key diplomatic forums. India’s Narendra Modi commented, “Paris or no Paris, our commitment to preserving the climate is for the sake of future generations.”

Domestically, Trump has forced a large swathe of American business, which had welcomed the predictability and global consistency of the Paris agreement, into public opposition to his administration, a break companies had been very reluctant to risk. Elon Musk, who had controversially clung to his seat as one of Trump’s economic advisors, walked out in protest. Jeff Immelt tweeted, “Industry must now lead and not depend on government.” The Governors of California, Washington and New York began assembling a new coalition of states willing to challenge Trump and coordinate their climate leadership, expecting at least 10, and perhaps as many as 25 participants. Former New York Mayor Michael Bloomberg was pulling together a broad coalition of cities, states and the private sector to prepare an “American Pledge,” a replacement set of strategies to meet America’s Paris commitment to a 26 percent emissions cut, using state and local policy tools and corporate commitments, all aggregated and formally reported to the United Nations in place of the federal government reports previously envisaged. American society is replacing the Trump administration in climate diplomacy—something unprecedented but very powerful, and something which begins to marginalize the President in a disruptive and one expects unwelcome way.

This kind of a pathway to climate progress was laid out and anticipated by Mike Bloomberg and myself in our recent book, Climate of Hope. But we never imagined that it would be Donald Trump whose desire to remain center-stage for his base would accelerate and jump-start the process.