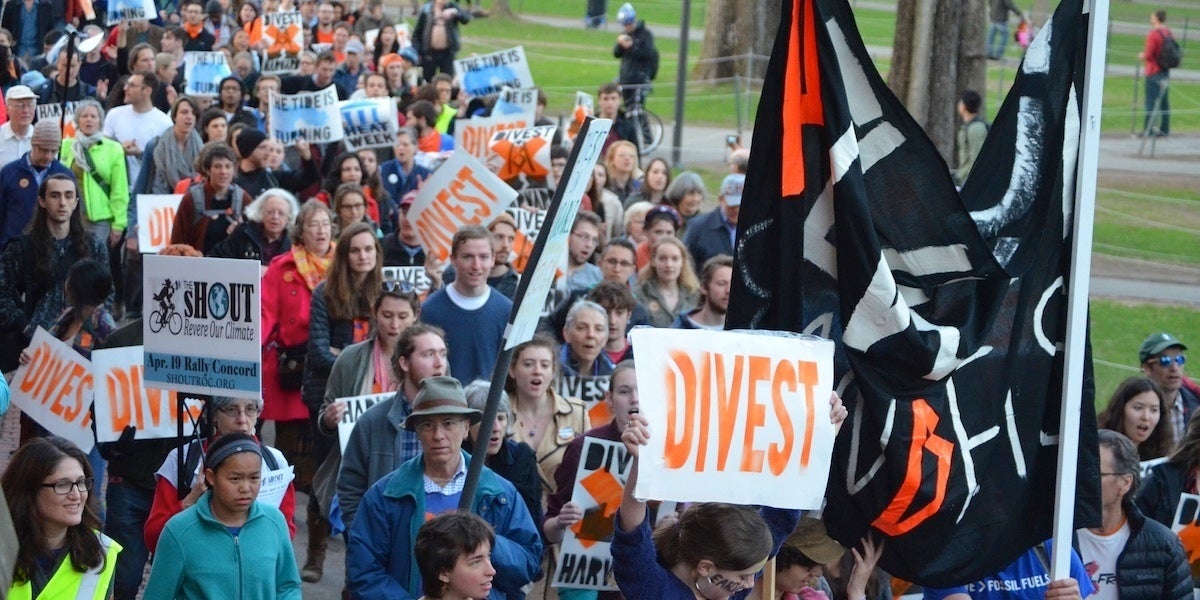 500 students, faculty, alumni, and community members march though Harvard Yard at the "The Tide Is Turning" rally. 350.org

Kathryn “Kat” Taylor, a member of the Harvard Board of Overseers and wife of billionaire
climate activist Tom Steyer, made an unprecedented public call on Harvard University to divest from fossil fuel stocks.

The action comes after the university’s $37.1 billion endowment—the world’s largest academic fund—reported a lackluster 8.1 percent return that reflected “deep structural problems” that will take years to turn around, its endowment manager said.

Taylor, whose six-year term on the elected board will be ending this spring, wrote in an
op-ed that as her last act, she is calling on University President-elect Lawrence S. Bacow and the Harvard Corporation, the university’s highest governing body, “to adopt ethical investment principles.”

“At a minimum,” she is asking the endowment arm of the university, Harvard Management Company, “to divest from fossils fuels to prevent the end of life as we know it through
cascading climate-driven disasters.”

“This single act would not only take steps to address the existential crisis of our time, but it would allow the University to lead its peers, as few, if any, American universities thus far have taken this important moral stance,” Taylor said.

“Many more experts than I have advocated for Harvard’s leadership to take the responsible action of divesting. For instance,
more than 200 Harvard faculty members, including top scientists in the field, have called on the University to divest from fossil fuel corporations,” Taylor said.

According to 350.org, a major campaigner in the global fossil free movement, more than 800 institutions, including universities, religious and medical groups, have joined the divestment movement to date.

“The movement to divest is large and thoroughly mainstream, comprised of many other top schools, cities, including New York City, as well as the Church of England and some pension funds,” Taylor noted. “Their commitments to divest over the next few years now cover over $6 trillion in assets. So, our request, with these august endorsements, is not radical—but recalcitrance is.”

In a stunning conclusion, Taylor said:

I am not going public with this call to action lightly or to be impolite. I have tried everything else—diplomatically in the background with other Overseers and outspokenly but behind closed doors in plenary. But this is too important for me to remain silent. It’s because I love Harvard that I am compelled to speak with all the force of my position before it extinguishes. Harvard once refused to divest from companies doing business with apartheid South Africa in spite of a moral movement on campus. I marched in the student protests in 1980 and received the same disregard we are dishing out to our future leaders now. After ten years of dismissal, and the election of no less than Bishop Tutu to the Board of Overseers, Harvard finally reversed itself. Let’s not repeat this mistake.

It’s time for Harvard to stop owning climate change. We can make money ethically, with more resilient returns too. We don’t just get profit from what we finance in this life, we endorse the activities underlying that profit—there is nowhere to hide from that. It is because we love our country and its most respected institutions that we call out the highest standards to which they must live.

While Harvard has not fully dropped its fossil fuel holdings, last year the elite college indicated it was “pausing” investments in minerals and oil and gas.

Colin Butterfield, the head of natural resources at the Harvard Management Company, said at the time that climate change is a “huge problem” and “I clearly feel that we are stealing from the future generations.”