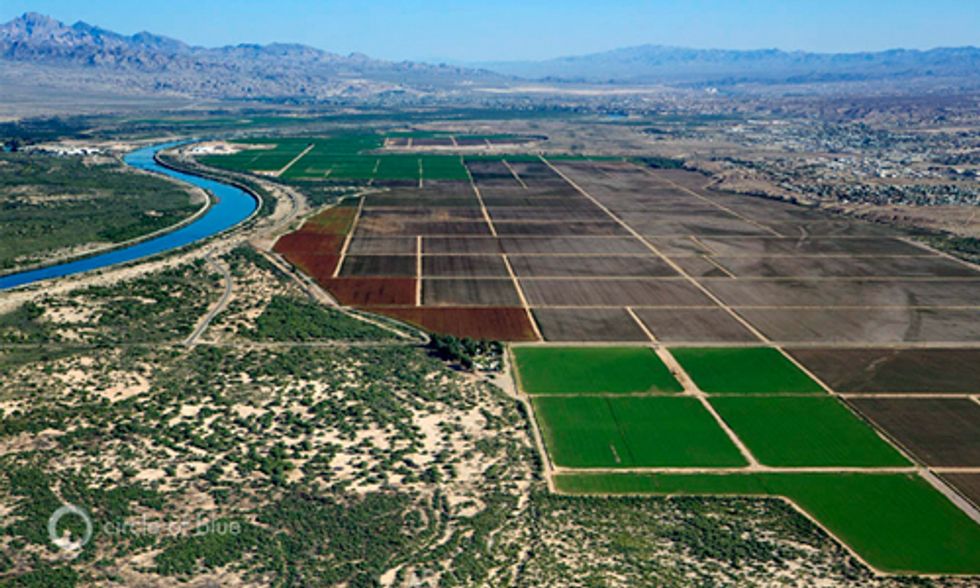 The mineral-stained canyon walls and the plunging water levels at Lake Mead, the nation’s largest reservoir, are the most visible signs of the driest 14-year period in the Colorado River Basin’s historical record.

The Colorado River flows past irrigated fields in Arizona. During a dry decade, most of the water losses in the seven-state basin come from groundwater, according to new research. Click image to enlarge. Photo credit: Carl Ganter/Circle of Blue

But the receding shorelines at the Basin’s major reservoirs—including Lake Mead, which fell to a record-low level this month, and Lake Powell, the second largest reservoir on the Colorado, 290 kilometers (180 miles) upstream from Mead—are an insignificant hydrological change compared to the monumental disruption taking place underground.

Satellite data show that in the last nine years, as a powerful drought held fast and river flows plummeted, the majority of the freshwater losses in the Basin—nearly 80 percent—came from water pumped out of aquifers.

The decrease in groundwater reserves is a volume of water equivalent to one and a half times the amount held in a full Lake Mead, according to a study published today in the journal Geophysical Research Letters.

“We didn’t think it would be this bad,” said Stephanie Castle, a researcher at the University of California, Irvine, and the study’s lead author. “Basin-wide groundwater losses are not well documented. The number was shocking.”

Scales in the Sky

The research team used data from the GRACE satellite mission to calculate the water balance for a Basin that spreads across seven states and reaches into Mexico.

Launched in 2002, GRACE is a pair of satellites that translate fluctuations in the Earth’s gravitational pull into changes in total water storage. Separate data sets are used to pull apart the contributions from snowpack, soil moisture, surface water and groundwater. GRACE data has been used to assess groundwater depletion in California and the Middle East, as well as flood potential in the Missouri River Basin.

Jay Famiglietti, an Earth systems professor at the University of California, Irvine, and a study co-author, calls the instruments “scales in the sky.”

The black line shows monthly trends in groundwater storage in the Colorado River Basin. The blue line is the average trend for the study’s December 2004 to November 2013 time frame. The red lines show the trends before and after February 2010, when the rate of groundwater depletion increased. Click image to enlarge. Image credit: UC Center for Hydrologic Modeling at the University of California, Irvine

For the study, the researchers looked at the period from December 2004 to November 2013. This time frame allowed them to isolate the effects of the drought on groundwater. By 2004, the Basin’s reservoirs were nearing record lows. Today, they are slightly, but not significantly lower, at 51 percent full.

The steepest rates of water loss occurred in 2013, which followed one of the driest years on record.

Chuck Collum, Colorado River manager at the Central Arizona Project, which delivers more than half of Arizona’s Colorado River allocation, said the study was helpful.

“The study is useful in using GRACE to verify at a coarse scale what water managers in the Basin know,” Cullom told Circle of Blue.

“That gives us confidence in what GRACE is seeing,” Castle said.

Still, GRACE data has limits. For one, the satellites cannot tell what share of the groundwater decline comes from an increase in pumping versus a decrease in the recharge rate, the amount that flows into an aquifer. In a drought, pumping would be expected to go up and recharge down, Famiglietti said.

GRACE also has spatial constraints. The satellites work best for land areas larger than 200,000 square kilometers (77,220 square miles), roughly the size of Nebraska. The satellites cannot pick out hotspots of groundwater depletion within the states.

“It’s difficult to break GRACE data down farther than we have,” Famiglietti told Circle of Blue. “We need additional data on the ground to tell what is happening.”