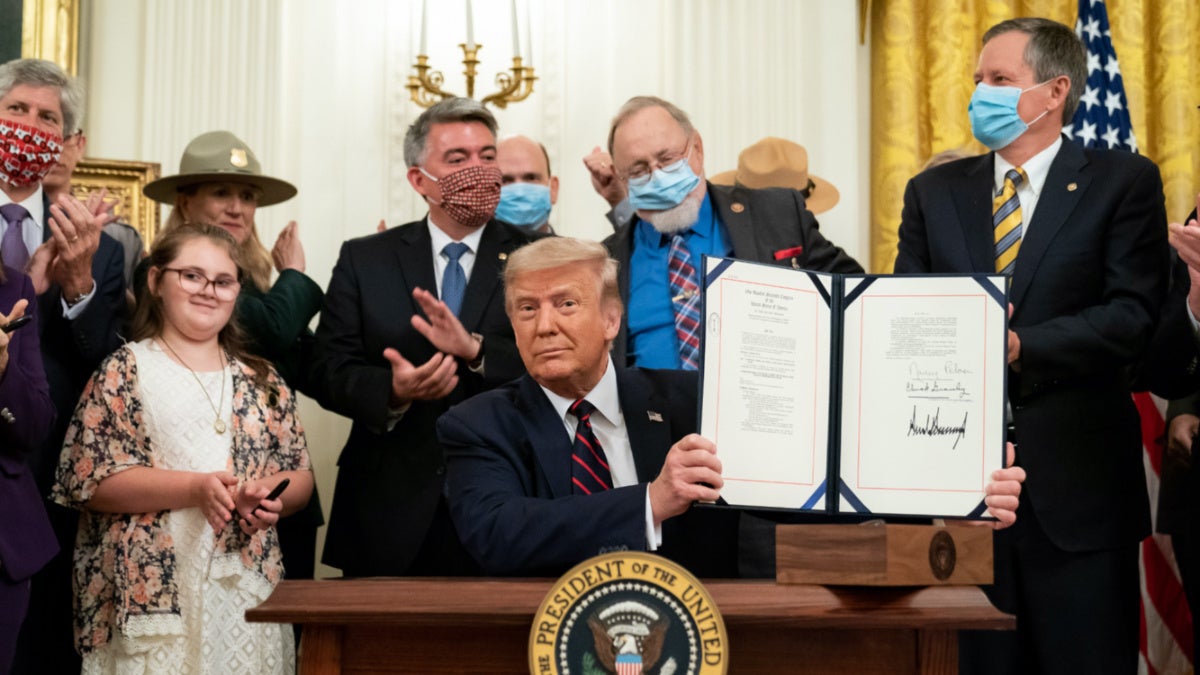 The Great American Outdoors Act is now the law of the land.

President Donald Trump signed the bill, which passed the Senate and House with bipartisan support, on Tuesday. It is considered a major U.S. conservation milestone.

“You cannot overstate the importance of this bill and what it will mean for national parks, public lands and communities across the country,” National Parks Conservation Association (NPCA) President and CEO Theresa Pierno said when it passed the House in July. “This is the largest investment our country has made in our national parks and public lands in more than 50 years, and it comes not a moment too soon.”

🚨Breaking News: The President has just signed the bipartisan #GreatAmericanOutdoorsAct.

The bill is important because it secured permanent funding for the Land and Water Conservation Fund (LWCF) for 0 million a year, EcoWatch previously reported. This fund uses oil and gas revenue to finance national parks and historic sites, along with local and state parks and recreation areas. The bill also earmarked .5 billion over the next five years to address the maintenance backlog currently burdening the National Park System, NPCA pointed out.

Trump claimed the bill signing as a major environmental legacy for himself and the Republicans.

“From an environmental standpoint and from just the beauty of our country standpoint, there hasn’t been anything like this since Teddy Roosevelt, I suspect,” he said at the signing ceremony, The New York Times reported. “At some point, they’ll have to start thinking about the Republican Party and all of the incredible things we’ve done on conservation and many other fronts.”

Trump’s remarks overlook the fact that his administration is the only one in history to strip more protections from public lands than it added, the Center for American Progress calculated in May. In fact, the administration has tried to gut protections for 35 million acres, an area roughly the size of Florida. Trump has also moved to roll back 100 environmental rules since taking office, according to a New York Times tracker.

Trump undercut his own conservation bonafides Tuesday when he mispronounced California’s famous Yosemite National Park as “Yo-Semites” twice in his speech.

“When young Americans experience the breathtaking beauty of the Grand Canyon, when their eyes widen in amazement as Old Faithful bursts into the sky, when they gaze upon yo-Semites, yo-Semites, towering sequoias, their love of country grows stronger, and they know that every American has truly a duty to preserve this wondrous inheritance,” Trump said, according to Business Insider.

The park is one of the most frequented tourist destinations in the U.S. and welcomed 4.5 million people in 2019. However, the lead official at the park’s visitors center told The Fresno Bee that Trump’s mistake was not uncommon.

“We hear it all the time, especially from East Coasters for some reason,” CEO of Visit Yosemite Madera County Rhonda Salisbury said. “I’m always shocked that people don’t know how to say Yosemite. I think foreign visitors know how to say it correctly more than American visitors.”

Trump’s signing ceremony also obscured the bipartisan origin of the new law. Only Republicans were present, and Trump did not mention any Democrats during his speech, The New York Times reported.

In fact, the bill was introduced last year by Civil Rights icon and Georgia Democratic Representative John Lewis, who passed away in July. Trump made no mention of this.

He did credit the man who introduced it in the Senate, Colorado Republican Cory Gardner. Gardner is one of two Republicans who Trump said convinced him to sign the measure. Trump had previously wanted to cut funding for the LWCF by almost 97 percent, according to The Hill. But a more than hour-long meeting with Gardner and Sen. Steve Daines (R-Mont.) persuaded him otherwise.

Gardner told reporters in June how he and Daines persuaded the president.

“I showed him a picture of the Black Canyon of the Gunnison National Park and I think Steve showed a picture as well and he looked at the park and said ‘it’s beautiful’ and we pointed up at the picture of Teddy Roosevelt on the wall and said this could be the biggest accomplishment going back to Teddy Roosevelt,” Gardner said in The Hill article.