Google Self-Driving Car Gets Pulled Over, Cop Finds No Driver to Ticket 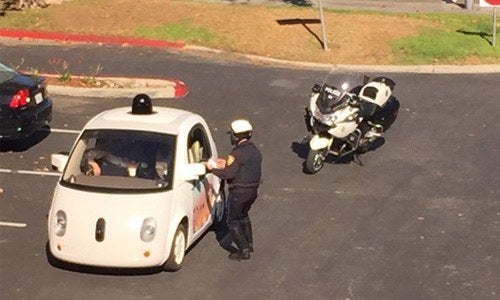 One of Google’s fleet of electric self-driving cars was pulled over by a police officer yesterday in Mountain View, California. The reason: going too slow. The vehicle was traveling 24 miles per hour (mph) in a 35-mph zone, backing up traffic, the Mountain View Police Department said.

Google’s self-driving car got pulled over for driving too slow https://t.co/ccjhQ9D69g pic.twitter.com/o508no7lZk

“Driving too slowly? Bet humans don’t get pulled over for that too often,” said the Google car team in a Google+ post. “We’ve capped the speed of our prototype vehicles at 25 mph for safety reasons.” If you’re wondering how the officer even managed to pull over a self-driving car, there is a human passenger who can manually take over the vehicle at any time.

The car wasn’t actually violating the law, so no citation was given. Google autonomous cars are only allowed to operate on roads with speed limits at or under 35 mph because Google sets the speed so low. Since the speed limit was 35 mph, the Google car was driving lawfully, the Mountain View Police Department said.

“Like this officer, people sometimes flag us down when they want to know more about our project. After 1.2 million miles of autonomous driving (that’s the human equivalent of 90 years of driving experience), we’re proud to say we’ve never been ticketed,” boasted the Google car team.

While some (myself included) find the idea of driving behind a car going 24 mph in a 35-mph zone painful, others pointed out that at least it was driving safely. Remember, about 1.25 million people die each year as a result of road traffic crashes, which are the leading cause of death among those aged 15 to 29.

The technology for self-driving cars has been making major in-roads in recent years. Several major car companies, including Ford and Mercedes-Benz, are developing self-driving cars. But it’s obviously not just car companies. Tech companies such as Google and Apple are getting into the game as well.

“It seems like every billionaire with a tech company is working on a self-driving car,” joked Stephen Colbert on the Late Show last month. When Tesla updated its fleet of electric cars with an autopilot feature last month, Colbert told Late Show viewers, “this technology is self-driving towards us whether we like it or not.”

Be that as it may, the technology is still in its infancy. Tesla’s feature makes the car semi-autonomous, though Tesla CEO Elon Musk estimates that a fully autonomous car is only a few years away. And despite Musk’s warnings that “the software is still very new” and drivers should be very careful, there were still, of course, some hiccups. One Tesla driver wasn’t as lucky as the Google car when he was pulled over by the Florida highway patrol. He had set his autopilot for 75 mph in a 60-mph zone. When Tesla issued the update, it cautioned drivers that they are “still responsible for, and ultimately in control of, the car.” If a Tesla on autopilot gets in an accident, it will still be the driver’s fault.

Last month, drivers of a Tesla Model S completed a cross-country road trip in record time for an electric vehicle—and the car drove itself almost the entire way.