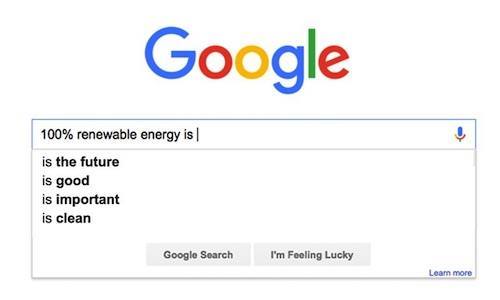 Google is another step closer in their goal of powering 100 percent of their operations with clean energy. Today, the search giant announced “the largest, and most diverse, purchase of renewable energy ever made by a non-utility company.” The massive purchase adds an additional 842 megawatts of renewable energy capacity to power their data centers, which enable the 1.7 billion Google users worldwide to surf the web. 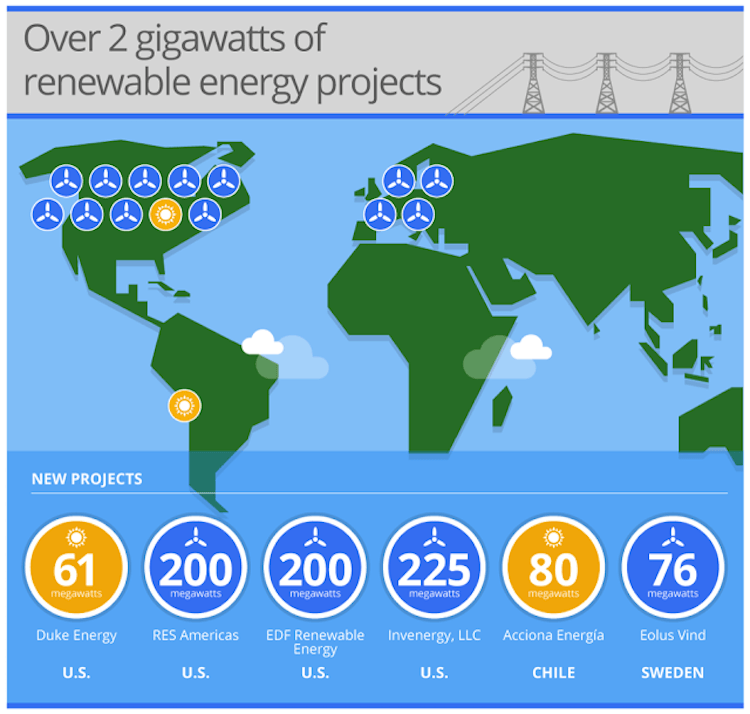 Google’s purchase isn’t just to power the internet with clean energy, but to phase out fossil fuels and ensure a sustainable energy future for all. Photo credit: Google

Or, as noted by Wired, Google now has enough juice to power two San Franciscos.

“These long-term contracts range from 10-20 years and provide projects with the financial certainty and scale necessary to build these wind and solar facilities—thus bringing new renewable energy onto the grid in these regions,” Google said. “For our part, these contracts not only help minimize the environmental impact of our service—they also make good business sense by ensuring good prices.”

Google estimated that the projects will generate an average of about 7.4 billion kilowatt hours of power, the Associated Press reported. The company hasn’t disclosed how much the purchase will cost.

Wired calculated that, in total, 37 percent of the energy for Google’s data centers will now come from renewable sources.

The announcement was made as world leaders at the COP21 climate talks in Paris hammer down on ways to cut carbon emissions.

As EcoWatch reported in July, Google already made pledges to slash their carbon footprint before the Paris climate talks, and was one of the 13 companies to commit a combined $140 billion to the White House’s American Business Act on Climate Pledge.

“We hope that our efforts play a small part in boosting all of us in the race to solve climate change,” Google said in today’s announcement.

“We don’t need to wait for a clean energy miracle. Google has repeatedly demonstrated that renewables are ready to meet our energy needs today,” Greenpeace Senior IT Analyst Gary Cook said. “The fact that some of the world’s most innovative companies are moving quickly towards a renewable energy future should encourage the negotiators at the climate talks to increase their level of ambition. We also need all governments to get rid of policies that favor fossil fuels and block access to a renewable supply of energy, which Google and other leading companies need to power their growth.”

Several other prominent internet companies such as Apple and Facebook have also committed to use 100 percent renewable energy to power their data centers.

Greenpeace has compiled a report called the Click Clean Scorecard that details the progress of major internet companies toward their renewable energy goals.

Alongside its renewable energy goals, Google has already made several other strides to go green. In June, the Mountain View-based corporation announced it was building its newest data center in Alabama on the site of a coal-fired power plant and committed to powering the facility with 100 percent renewable energy.

In August, Google launched Project Sunroof to make it easier for homeowners switch to solar.

Stick it where the sun shines! Project Sunroof can help you make the switch to solar → http://t.co/Jv0xbrm8EJ pic.twitter.com/djAaCTArWc

“Beyond our efforts to power our own operations with renewables, we’ve made separate agreements to fund $2.5 billion into 22 large-scale renewable energy projects over the last five years, from Germany to Kansas to Kenya,” Google added in today’s announcement.