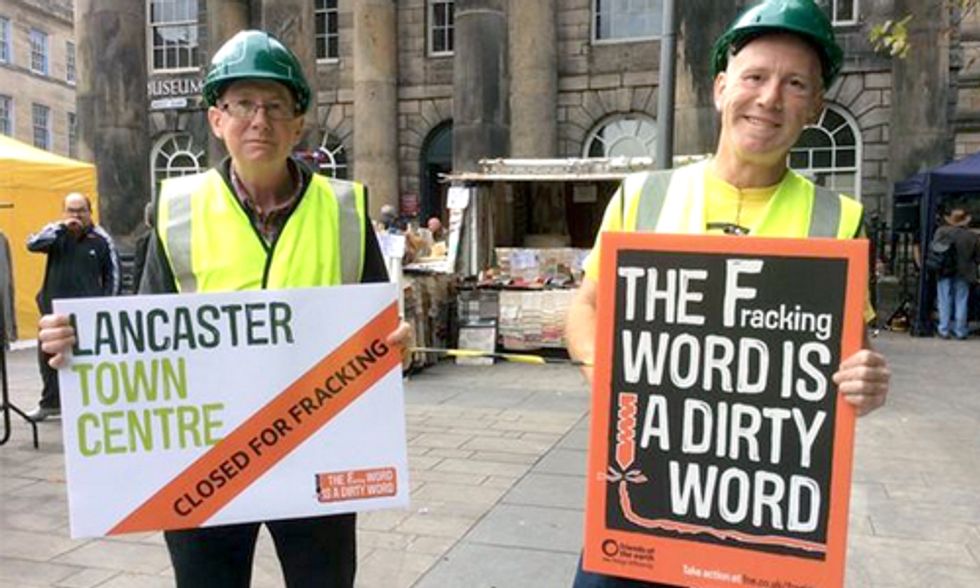 Thousands of people participated in Saturday's Global Frackdown calling for a worldwide ban on fracking. With more than 250 events in more than a dozen countries, anti-fracking activists united with the message: no to fossil fuels, yes to clean, renewable energy.

“Across the globe a powerful movement is emerging that rejects policies incentivizing fracked natural gas as a bridge fuel to a sustainable future. Any initiative claiming to promote sustainable energy for all must stimulate energy efficiency and renewable energy programs, not foster fracking for oil and gas,” said Wenonah Hauter, executive director of Food & Water Watch.

“The hundreds of Global Frackdown events mark the growing consensus that fracking should be banned and that the United Nations should be on the forefront of pushing for truly sustainable energy solutions.”

On the eve of Global Frackdown, a coalition of hundreds of groups worldwide sent a letter to United Nations Secretary General Ban Ki-moon urging him to reject fracking as a part of the Sustainable Energy for All (SE4All) initiative.

"Mounting scientific evidence shows that fracking is not only inherently unsafe for both public health and ecosystems, but that fracking may actually drive global warming more than conventional fossil fuels due to methane leakage from oil and gas drilling operations and their attendant infrastructure," the letter states.

"According to the 2013 Intergovernmental Panel on Climate Change Fifth Synthesis report, methane from oil and gas is 87 times as powerful at trapping heat as carbon dioxide, pound-for-pound,over a 20-year period and 36 times more so over 100 years. So, while natural gas may burn relatively cleaner than oil or coal, the cumulative effect of extracting gas and building the necessary transport infrastructure is a greater threat to the planet. What’s more, such short-sighted investments only serve to delay the mandatory transition to truly renewable energy sources like wind and solar."

The hundreds of groups that signed the letter are hoping to find out soon whether fracking is part of the SE4All and if so, whether Ban Ki-moon is "taking steps to rectify the matter."