What to Plant in a Warming World 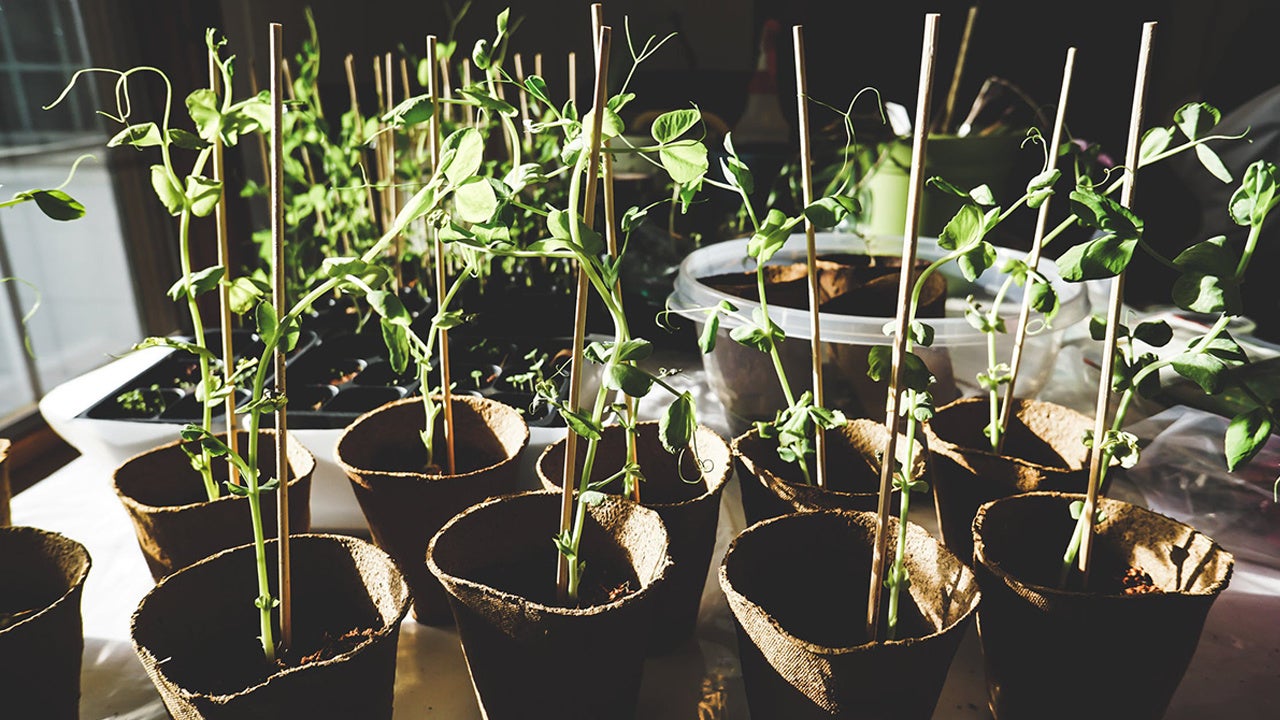 With springtime in the air and the days getting longer, you may well be daydreaming about your garden or flower bed and the quiet weekend hours you hope to spend there in the weeks to come. But knowing what to plant as temperatures climb and precipitation patterns change around the world can be a challenge.

The planet just experienced the hottest decade (2010-2019) on record, according to NOAA, with 2019 itself ranking second-warmest year ever recorded.

As we saw in Australia earlier this year, drought exacerbated by the climate crisis can lead to devastating wildfires. Elsewhere, in places like the American Midwest, extreme rainfall events are becoming more frequent, resulting in major agricultural losses that make the food supply we all depend on less secure.

That’s some pretty heady stuff for a blog about gardening, we know. But it’s vital to understand that when it comes to the climate crisis, business as usual will not cut it. Anywhere. Not in electricity production. Not in industry. Not in transportation. And certainly not in agriculture — right down to a home garden or flower bed.

Some plants are better suited to extended periods of high heat than others, while many can survive on less water (or conversely, can handle a little too much for a bit longer) than their pricklier peers.

Below, we’ve put together a few key tips on how you can adapt your landscape using plants better-suited for climate impacts in your area. As always, be sure to research what plant species are native to your region before buying and planting — your local biodiversity and natural resources, as well as the plants themselves, will thank you.

When it comes to our changing climate, it’s fairly safe to “expect the wet to get wetter, and the dry, drier.”

If the region you live in is already a fairly dry one — like, say, the American West, Middle East and North Africa, and much of Australia — you’re likely to experience even drier conditions and occasional drought as the world continues to warm.

These concerns, of course, have far larger implications than what you plant in the beds around your front porch or in your backyard. But that’s not to say picking the right plants for your particular changing climate has no role at all in making you a better steward of natural resources at a time when it matters more than ever.

As just one example, according to the EPA, outdoor water use, including the watering of lawns and gardens, accounts for about 30 percent of all residential water use in the U.S., and that number “can be much higher in drier parts of the country and in more water-intensive landscapes.” So it makes sense that opting for plants that are able to thrive in drier conditions can also help rein in your home water use at a time when water resources can become strained.

But which plants are less thirsty and more resilient during periods of drought?

Lavender is a particularly popular — and wonderfully fragrant — common plant that “has evolved to subsist on little water.”

Cushion spurge (Euphorbia), with its pale green leaves and yellow bracts, is an especially good drought-tolerant plant for gardens in cooler climes. And ornamental grasses tend to be both aesthetically pleasing and drought tolerant, more generally. Feather reed grass, blue fescue, fountain grass, and big bluestem (called “Monarch of the Prairie” by some), in particular, will all survive periods of water shortage while still looking great.

If more conventional flowers are your thing, consider peonies, geraniums, butterfly weed, baby’s breath, sedum, and coneflower, all of which require a bit less water than many other common garden flowers.

It’s important to note that the perennials above are only truly drought-tolerant once they have been fully established. This means that in their first and sometimes second years, they will require a little more water and care. And as with all plants, if you are in the U.S., you should check to make sure it is a good fit for your USDA Hardiness Zone.

It’s important to remember that’s a worldwide average; many regions have experienced more warming than this on the ground. But any change in temperatures can and will change where a plant can be grown — and some plants are better able to deal with periods of extreme heat than others.

A few of the plants mentioned above as being drought-tolerant can also deal pretty well with higher temperatures, including butterfly weed and purple coneflower.

Celosia, with its bright, feathery orange, purple, yellow, red, and white plumes, is a favorite for many American gardeners — and is well-known to “remain upright and strong even in sizzling heat.”

And zinnias, gaillardia, purslane, and cosmos are all prolific, heat-loving annuals.

When it comes to perennials and other shrubs, if you live in a largely temperate area that experiences occasional periods of high heat, consider adding viburnum to your landscape. Its fragrant clusters of delicate white blossoms arrive fairly early in the season, often in May and June, and it does a famously good job of standing up to late-summer heat, providing birds and other wildlife refuge in the shade created by its eight-to-10-foot average height and broad, leafy boughs.

Yucca, a broadleaf evergreen, is native to some of the warmest and driest parts of North America, so it’s no surprise that, according to Bob Vila, “When other plants begin to wilt in the heat, yucca stands tall and strong.”

For a smaller shrub that does particularly well with higher humidity (it is a longtime stalwart in gardens across the American South), consider lantana.

Like we said earlier, “expect the wet to get wetter, and the dry, drier.”

Put as simply as possible, climate change impacts our weather largely by putting our water cycle into overdrive. As temperatures around the globe climb, water from land and sea is evaporating faster. Making matters worse: Warmer air can hold more water vapor.

More water in our atmosphere means more intense precipitation and more intense storms. It’s called a cycle for a reason.

So, if you are in a region experiencing more and more precipitation, and are looking for a great way to soak up some of the extra rain while keeping your landscape looking great, consider a “rain garden.”

“A rain garden is a garden of native shrubs, perennials, and flowers planted in a small depression, which is generally formed on a natural slope. It is designed to temporarily hold and soak in rain water runoff that flows from roofs, driveways, patios or lawns,” according to Groundwater.org. “Rain gardens are effective in removing up to 90 percent of nutrients and chemicals and up to 80 percent of sediments from the rainwater runoff. Compared to a conventional lawn, rain gardens allow for 30 percent more water to soak into the ground.”

It’s important to note that rain gardens are not ponds, water gardens, or wetlands. They are meant to collect and hold rainwater only during and for no more than 24 or so hours max after a rainfall event. Designing them this way goes a long way to keeping another persistent climate pest at bay: mosquitos.

Rain gardens are typically placed on the downside of a slope — the best location for them to collect excess rainwater runoff — and at least 10 feet from a house or other residence. Building the garden itself is a bit of a process, one with more than a few moving parts (luckily, Penn State Extension offers a fantastic primer on getting started). The good new there is that most work associated with rain gardens happens up front; once the garden is established, it typically requires minimal maintenance.

Just as some plants are drought-tolerant, other vegetation can easily withstand temporary excesses of water — and these are the plants you want to seek out for your rain garden. Be sure to seek out a mix of shrubs, perennials and grasses, and flowers that are native to your region.

Some shrubs that “are tolerant of inundated (flooded) conditions … [and] can tolerate standing water for a period of time” include elderberry, silky dogwood, winterberry, and swamp azalea. American beautyberry, red-osier dogwood, and Virginia sweetspire can handle pretty wet conditions too, but don’t love it when standing water hangs around quite as long.

In the perennials, grasses, and ferns department, look to marsh marigold, switchgrass, goldenrod, cinnamon fern, and blue flag iris (among many others) for the wettest areas of the rain garden, and evening primrose, threadleaf coreopsis, blue mistflower, and boltonia for the corners that get a little less swamped.

Here at Climate Reality, we’ve long had a keen interest in climate-smart agriculture and the ways farmers and gardeners can do their part to help turn the tide on climate by taking action to fight this crisis.

It’s important to remember that you don’t have to manage a thousand acres to do something real for our climate. From edible landscaping to “lasagna gardening” and so much more, you can be the change you want to see. You don’t even have to leave your own backyard to get started!

And when your neighbors, colleagues, or family members ask what you’re up to, tell them you are taking action for the planet. Sometimes, the most powerful climate action you can take is simply talking about the crisis and the ways we can fight it and win together.

In the meantime, sign up below to join Climate Reality’s email list and we’ll keep you posted on the latest developments in climate policy and how you can help solve the climate crisis.