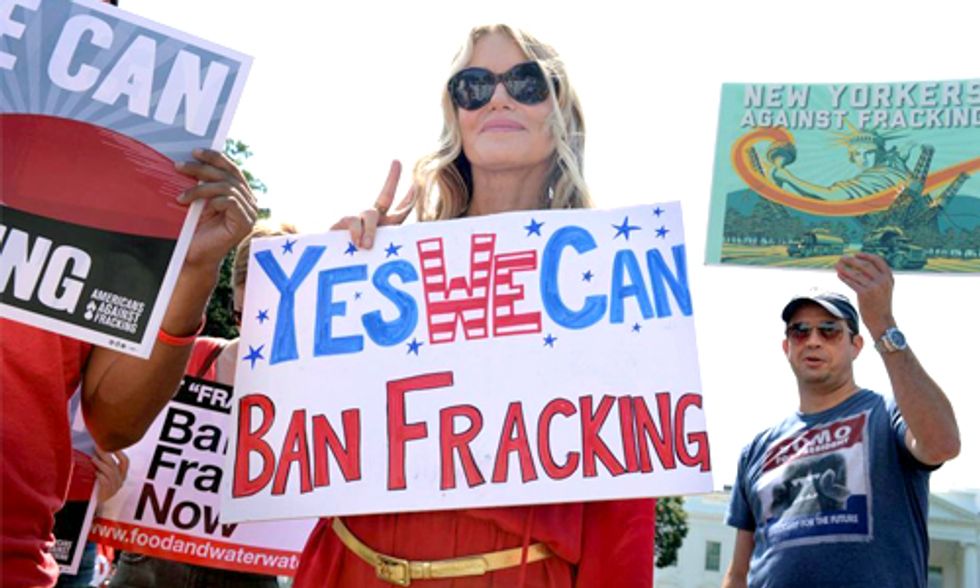 By Daryl Hannah and Diane Moss

Fracking imposes unnecessary risks on public health and on our diminishing, yet most precious of resources–water.

The Associated Press reported: “The government projects that at least 36 states will face water shortages within five years." In 2013, the WSJ found at least 15.3 million Americans have a natural gas well within one mile of their home that has been drilled since 2000. According to the Congressional Office of Research, more than 90 percent of new oil and gas wells are now fracked.

Several studies, including this one by Duke University, this one published in Environmental Science and Technology and this one by the U.S. Environmental Protection Agency show injecting the fracking fluid, which contains thousands of pounds of chemicals per well, significantly elevates levels of toxins, including radiation, metals, brine and volatile hydrocarbon gases like the carcinogen benzene in affected water. Most fracking fluid is left deep in the ground, which could migrate through pathways created by natural and man-made faults, endangering people over many generations.

Added to water risks over the lifecycle of fracking shale are documented heavy smog,earthquakes, and further disruption to our climate from oil and gas greenhouse gas emissions. The public, even in states like Texas where regulations have been tightening around fracking, also struggles to gain comprehensive information and federal legal protection, due in part to the fact that the oil and gas industry, and fracking specifically, have historically been granted loopholes in numerous federal laws, including the Clean Air Act, Clean Water Act, Safe Drinking Water Act and Emergency Planning and Community Right to Know Act.

Consumer gasoline and natural gas prices are bound to continue the upward trend of the past decades, as these finite commodities deplete.

A growing number of countries, cities and businesses are demonstrating that these risks are largely unnecessary. Several towns, regions and nations, like this recent example and this partial list, have banned or put a moratorium on fracking and are still covering energy needs. Countries like Denmark, Scotland, and Germany aim to use all or mostly renewable energy in the next decades. The City of Sydney has a target to use 100 percent local renewable energy sources for electricity, heating and cooling by 2030 because analysis shows it will be more economical, supported and climate friendly than fracked gas and other non-renewable energy resources.

Hundreds of U.S. companies have been trying to shift to 100 percent renewable power procurement—including mainstream players like Staples, Kohl's, Apple, and Google. With cleaner, renewable energy technology prices steadily dropping and running on virtually limitless, mostly free resources, it's not hard to figure out why.

Hopefully, the country will listen to its citizens who are realizing that we can't frack our way to energy and economic security.

Daryl Hannah (@dhlovelife) is an actress and environmental advocate. Diane Moss is a founder of the Renewables 100 Policy Institute and an independent energy policy consultant.

Visit EcoWatch's FRACKING and RENEWABLES pages for more related news on this topic.