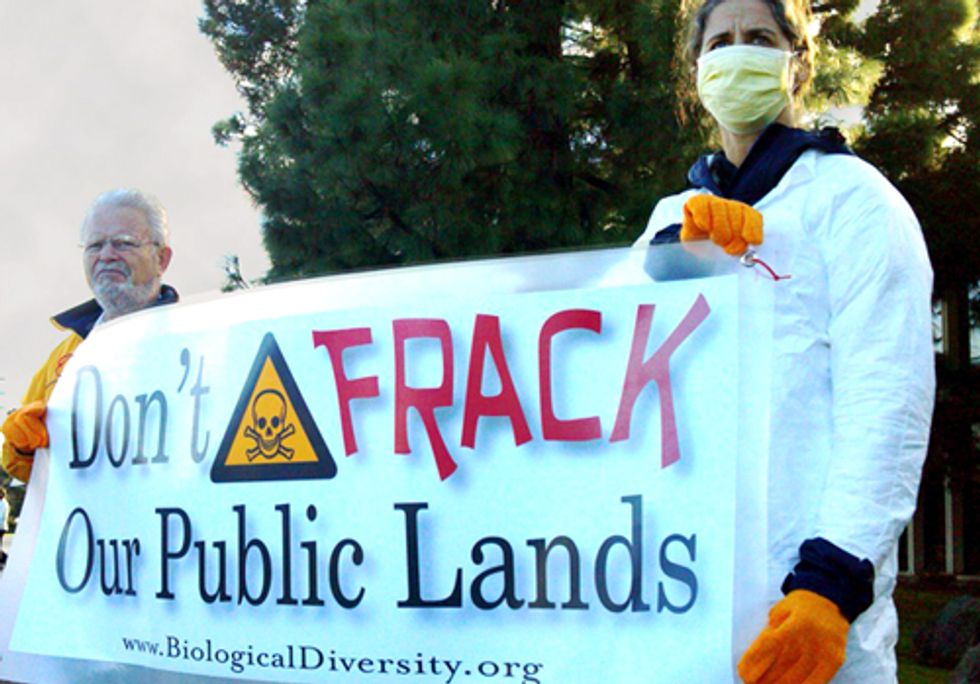 Dozens of protesters in hazmat suits carrying barrels labeled “Warning: Toxic Fracking Fluid” rallied outside a federal auction this morning against plans to lease more than 17,000 acres of California public land to oil companies for drilling and fracking. The Bureau of Land Management (BLM) auction would open public land in three counties—Monterey, San Benito and Fresno—for oil drilling and fracking. Fracking, or hydraulic fracturing, is a highly polluting form of oil and gas extraction. Rep. Sam Farr (D-Calif.) has urged the BLM to delay the auction over fracking concerns.

The demonstration was organized by the Center for Biological Diversity, Clean Water Action, Food and Water Watch, Credo Action, 350.org, Earthworks and Democracy for America.

“A fracking boom will devastate California’s beautiful public wildlands,” said Rose Braz, climate campaign director at the Center for Biological Diversity. “The federal government should protect these beautiful public places, not sell them off to be drilled and fracked, risking irreparable harm to our air, water and climate.”

“Opening up thousands of acres of public land to oil and gas exploration would directly undercut our state's commitment to clean and renewable energy and endanger our already threatened water supply,” said Andrew Grinberg, program organizer at Clean Water Action. “We need to slow down and assess the long-term impacts of increased drilling, fracking and other enhanced oil and gas recovery processes on California's communities, environment and health, and the BLM should do its part by withholding these leases."

Ahead of the auction, Congressman Farr urged the BLM to delay the auction until it can “ensure adequate safeguards” and address concerns raised by Monterey County.

Fracking is a highly polluting form of oil and gas extraction that involves blasting huge volumes of water mixed with toxic chemicals and sand deep into the earth to break up rock formations. Fracking has been tied to air and water pollution; it threatens the climate by emitting large amounts of methane and opening up new oil deposits. About 25 percent of fracking chemicals could cause cancer, scientists say.

Recent advances in fracking are driving growing interest in California’s Monterey Shale, a geological formation holding the largest shale oil deposit in America. This formation, which underlies the BLM leases, includes some of the country’s most productive farmland and important wildlife habitat.

Area farmers are concerned, said Paula Getzelman, president of the Southern Monterey County Rural Coalition and owner of Tre Gatti Vineyards in Lockwood, only 4.5 miles from one of the parcels being auctioned off.

“Many of us here in the San Antonio Valley understand the potential seriousness of unregulated fracking activities, especially where it concerns the quality and quantity of water,” Getzelman said. “Agriculture depends on a consistent supply of untainted water, ranchers depend on water for their animals and homeowners depend on clean, sweet water for activities of daily living.”

About 25 percent of fracking chemicals could cause cancer, while many others harm the nervous, endocrine, immune and cardiovascular systems, according to scientists. A recent study from the Colorado School of Public Health found that fracking contributes to serious health problems in people living near fracked wells.