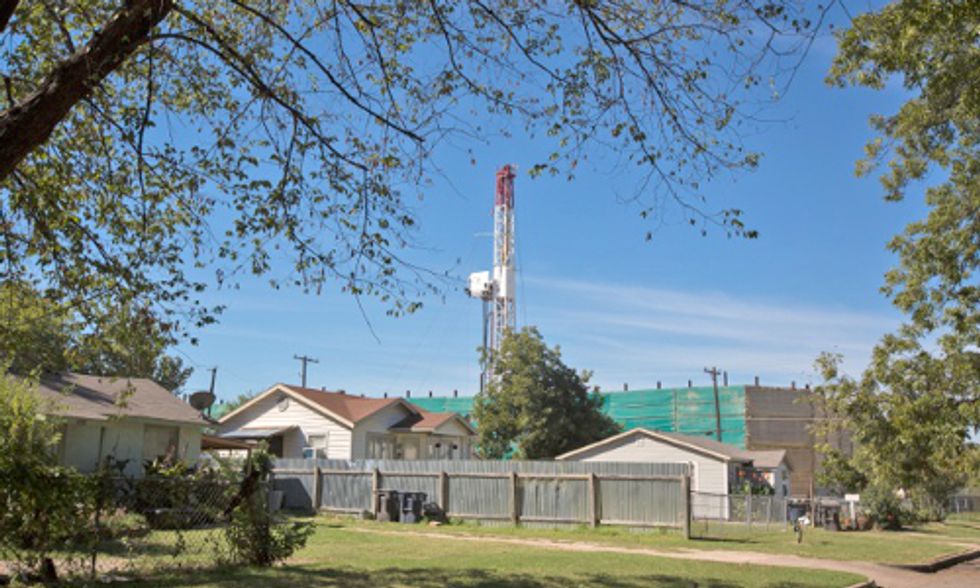 When a representative from Chesapeake Energy knocked on Phyllis Allen's door in 2003 and offered $300 for her mineral rights and an invitation to a lease-signing pizza party, she turned them down.

Phyllis Allen in front of a compressor station near her home. The first major city in the U.S. to allow fracking in city limits, Fort Worth operations began in Allen's predominately poor, working class African American neighborhood. ©2013 Julie Dermansky

Allen’s home is in the United Riverside neighborhood, predominately poor and working class African American, the place where fracking first took hold in the city. She'd like to say she didn't sign because of her concerns for environmental issues but, at the time, she hadn’t heard of fracking.

She didn't sign because of the advice her father gave her: "Never sign anything you don't understand."

Since then, Phyllis Allen, a retired Yellow Pages sales representative, has educated herself about fracking. During her daily walks along the Trinity River she takes note of environmental problems. In 2011, she saw a white chemical cloud rising over a compressor center and workers in hazmat suits going in to shut it down.

In another instance, Allen witnessed fluid being pumped into the Trinity River during the peak of the drought. She contacted Streams and Valleys, the organization responsible for the trails along Trinity, but never found out exactly what was going on. And she's noticed that migratory birds don't come back to the riverbank anymore.

Fort Worth, TX, which sits on top of the vast Barnett Shale, is the first major city in America to allow extensive fracking within the city limits.

The city has approximately 2,000 gas wells and more are being drilled. Though there is an ordinance to keep fracking 600 feet from residences, exceptions are made. In some locations fracking happens 300 feet from homes and businesses.

As far as Allen knows, none of her neighbors resisted signing the leases.

Fracking site in residential neighborhood in Fort Worth, where wells are drilled 300 feet from homes in some locations. ©2013 Julie Dermansky

"The poor and working class don’t have fracking on their radar," she said. "They are worried about making house and car payments and don't have time to follow environmental issues in their community."

"White people fight back when they see something wrong being done in their neighborhoods because they believe the system is just," Allen continued. "Black people already know that the system is stacked against them so they are less likely to get involved—that’s why the frackers started here."

"It is not correct to simply say the African American community is apathetic about fracking," Allen said further. "You need to consider there is a growing group of people who have less and less, with little chance of standing up to the one percent, so they don't protest."

Don Young, a stained glass artisan in Fort Worth’s predominantly middle class West Meadowbrook neighborhood got a knock on his door from the representative of a fracking company a few years after Allen did. Young also started researching fracking and has become one of the industry's largest adversaries in the area, founding Fort Worth Citizens Against Neighborhood Drilling Ordinance.

Despite small victories, including stopping the Tandy Hills Natural Area from being fracked, Young recently put his house on the market.

"Fort Worth has been fracked to capacity," according to Young. "There is no turning back. Some days the air is so bad you can't see downtown."

When a well is first fracked industry recovers what is known as the mother lode. The bulk of the natural gas or oil is harnessed from the drill site during the first year.

The yield greatly decreases after that, so companies cap wells and drill new ones. They then move to sites previously leased, ensuring they get to tap into all the leased properties before any of the leases expire.

Once a well is drilled they can come back to re-frack. When gas prices go up, re-fracking existing wells will become a profitable venture even with a much smaller rate of return.

When that happens, Young says, "Fort Worth will be a horrible place to live."

Fracking in Fort Worth knows no boundaries. Wells are drilled next to schools, parks and cemeteries. Despite the risks—health hazards from increased air and water contamination; water shortages exacerbated by the industry's need for millions of gallons of water; the imminent danger of ruptured gas pipelines and earthquakes—few are fighting back.

Fracking in Fort Worth knows no boundaries—wells are drilled next to schools, parks and cemeteries. Don Young stands at his father's burial site in Handley Cemetery, where the fracking industry has obtained drilling rights. ©2013 Julie Dermansky

The fracking companies have spread a lot of money around to cultural centers and church groups to curry favor and reassure residents.

In the Fort Worth Museum of Science and History, they have interactive fracking displays, including a game with joysticks for directional drilling. These public relations moves help keep would-be opposition factions at bay.

"While we have grown complacent, the fracking industry has chipped away at our quality of life big time," Young says.