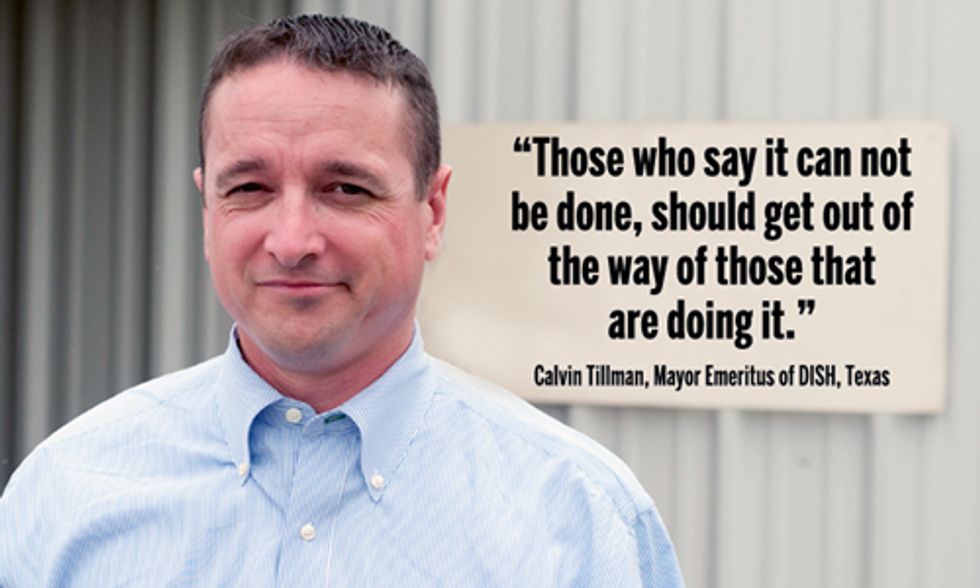 Since I joined the fight to end fracking three years ago, I’ve had the privilege of meeting so many inspiring people across the U.S. fighting the oil and gas industry in their communities. Most recently, I met Calvin Tillman, Mayor Emeritus of DISH, Texas, who visited Southern California on a speaking tour of Carson, Brea and La Habra Heights. Each city is engaged in its own, unique struggle against Big Oil, but Tillman’s story of standing up to the industry hit home for residents of each of these communities.

If you’ve seen the Josh Fox documentaries Gasland and Gasland Part II, you may remember that Tillman, while mayor of DISH, fought to protect the community from dangerous natural gas projects. Ultimately, his family made the difficult decision to move away from a sprawling gas industry in the Fort Worth exurbs. The reason was simple—his kids were getting sick, and the industry wasn’t pulling out any time soon.

Tillman’s California visit was timely. Two Los Angeles County cities are turning people out to the polls on March 3 to decide whether to protect their communities from dangerous oil drilling. In La Habra Heights, a small rural community, residents will decide on Measure A, which would ban fracking and other unconventional drilling. And in Hermosa Beach residents will vote on Measure O, which would reverse a long-time ban on drilling in the coastal city; if the industry-funded measure passes, the city will be obligated to approve a project that will install a drill site within 160 feet of some residents’ homes and within one-half mile of half of the residents of Hermosa Beach. This week, Get Out the Vote operations are full swing in Hermosa Beach and La Habra Heights.

Meanwhile, residents of Carson recently defeated a 200 well proposal by California Resources Corporation (formerly Occidental Petroleum) and the Los Angeles County city is working to revise its oil and gas code in response to public pressure. And folks in the Orange County city of Brea have been struggling to get city officials to take under consideration their concerns about nearby oil wells.

Tillman had a lot to share with these communities about going up against the desperate-for-expansion fossil fuel industry, but his message boiled down to a simple directive: Get involved.

In the week leading up to his SoCal tour, I had an opportunity to catch up with Calvin Tillman, and ask him about his experiences working with communities across the U.S. since he moved from DISH to Aubrey, Texas.

Q. What have you been up to since you moved from DISH?

A. I founded ShaleTest.org [a non-profit organization that collects environmental data for families and in low-income communities being negatively affected by shale oil and gas extraction] and have done a lot of work all over the U.S. It has really outgrown what we initially intended it to be—we had to hire an executive director, and put infrastructure in place to keep up with the demand. We’re doing work with groups in California, Colorado, New Mexico, Texas, Louisiana, Montana, Wyoming, Ohio and New York.

I’m still very active with the legislature. In Texas it’s a constant battle. We have our legislative session going on right now, and we’re very active in working with a variety of different groups to help protect people and their property from their [the fossil fuel industry] abuses.

Elected officials seem to think there’s only one side of this property rights argument. The people who live in these communities have rights too, but the oil companies seem to have the jump on [the politicians’] side of the fence. I’ve been successful to some extent, but I still have a long way to go.

Q. Were there hurdles to calling out the oil industry in DISH?

A. The biggest problem was financial—we just couldn’t keep up with the money financially that it takes to fight these folks. They started to bully us a bit, would do public info requests that were so broad that it would be thousands and thousands of pages of docs. We had a part-time city secretary, so it was almost a harassment technique they used to keep us busy making copies for public info requests instead of dealing with them.

We would get so many public info requests for a small town, I started printing every email off and filing it because I knew they would be demanding it at some point. These weren’t always companies that had anything to do with DISH. Sometimes it was the trade associations. They would always ask for sensitive info they had no business to, and then would always back off when we called them out.

Q. You do a lot of speaking to a lot of different groups: is there anything particular that stands out to you in this movement?

A. Yeah. If you look at this from a 30,000-foot level, every city looks the same. Not only in the way they approach this with the politicians, but also in the way they deal with the environmental impacts. If I take a sample from a compressor station in Colorado versus Texas, you’re going to see the same chemicals and the same problems. Their approach is the exact same.

Most of the small towns, the local towns, are not going to take $100,000 in campaign contributions—local officials don’t get paid. They use the money to influence, especially the larger cities, the campaign contributions. All of a sudden, city councilmen will author a blog for them, or get a seat on some trade association. We see that everywhere, all across the country.

The industry tries to manipulate the democratic process, and make it to where they don’t have to follow any rules.

Q. Any community fights or places you’ve been in particular?

A. There’s different parts of the country that have been ravaged at different levels. In California, there’s problems there, and probably problems you don’t know about, and https://www.google.com/adsense/app#homewon’t know about for years to come. In western Pennsylvania you have extremely economically depressed areas that have been ravaged by the industry. You have areas where peoples' water goes away, or turns black, or smells horrible, so the industry sets up water buffalos [large water tanks] for them. If those residents speak out in any way, the industry takes their water away.

I know this lady who had to give her daughter a bath from a gallon jug that they were filling up at somebody else’s house because the industry took their water away. You don’t believe that’s happening until you see it for yourself. I’ve been to everywhere—Dimock, Pavillion, but that scene in, I think, Butler, Pennsylvania always sticks with me.

This always starts in lower economic areas, it seems. And those are the ones that are always the most impacted and the least able to defend themselves.

Q. This isn’t your first California tour—what’s it like meeting all of these communities?

A. The first time I went out there, I was just doing some work with Earthworks and ShaleTest, and I met with a few of the smaller groups. I’ve seen the possibility of making some headway, which prompted me to come back and do speaking events last summer.

I just feel like there’s momentum there that could be helpful.

Obviously the national movement, the national exposure to what’s going on—the same things that you see in Texas—you see in California. Most Californians probably don’t understand that, so I think it’s important to build on a local perspective.

There’s plenty of things California does to require more responsibility, but there’s still problems. Nobody’s immune from those problems. Folks in California need to know what’s coming over the back fence.

Q. When you speak to different communities and tell your story, is there any message in particular you want to get across?

I didn’t win against the oil industry, so I don’t know what that’s like. But I can tell you what does happen when you don’t get involved.

Walker Foley is a Southern California Organizer with Food & Water Watch. He became inspired to end fracking after the gas industry fracked the land surrounding his family’s farm in the verdant hills of northeast West Virginia.