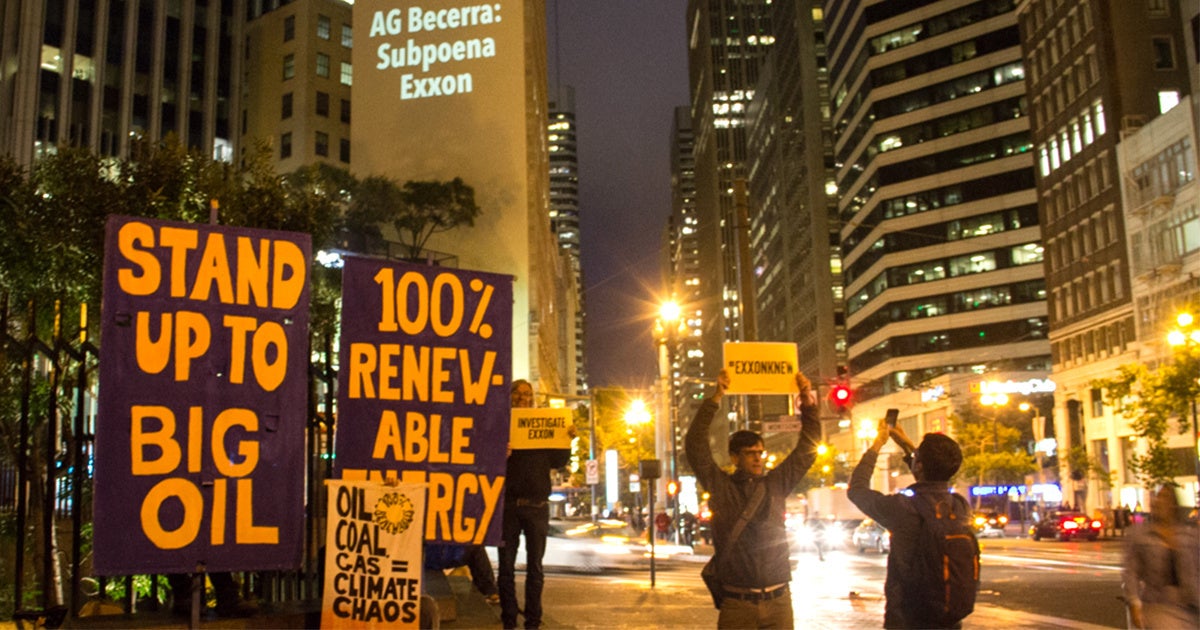 With Trump and fossil fuel executives in the White House, any shot of powerful and lasting protections for our climate and communities will come from our cities and states. That’s why it’s so troubling that in California, one of the most progressive places in the U.S., current state Attorney General Xavier Becerra is failing to stand up to ExxonMobil and its ilk.

Executives at companies like Exxon knew everything there was to know about climate change as far back as the 1970s, but chose to spend the last half a century sowing doubt and confusion. Exxon’s own Rex Tillerson is now U.S. secretary of state, even following revelations that he used the secret alias “Wayne Tracker” to cover up all things climate change while serving as the corporation’s CEO. And while the rich get richer, it’s our communities—especially low-income communities and communities of color—who bear the impacts of this dangerous deception.

2017 was a year of unprecedented federal regression and climate devastation: from Trump backing out of the Paris agreement and hellscape wildfires engulfing California, to Hurricane Maria ripping through Puerto Rico, shedding light on existing inequities previously swept under the rug. It was also a year of resistance and uprising, as it became clearer than ever that these weren’t isolated events, but rather perpetuated and worsened by fossil-fueled greed.

Now, people are rising up to hold corporate executives to account for the climate destruction they’ve caused. The attorneys general of New York and Massachusetts are showing tremendous leadership in their unyielding investigations into what could be the worst case of corporate fraud in history. Is California going to really sit back and force New York and Massachusetts to take on Exxon alone?

As Becerra and elected officials meet and discuss strategies to tackle climate change, launching an investigation into all that Exxon knew is Xavier Becerra’s opportunity to prove he’s a real climate champion.

This is far from the first time AG Becerra has been urged to investigate Exxon. Local organizers and national groups delivered more than 70,000 petition signatures calling for an investigation last April. In January, more than 30 national and local organizations from labor unions to environmental organizations signed a letter to Becerra ramping up the call. Even the Los Angeles Times editorial board has urged him to move on an Exxon probe.

This, as head of the Center for International Environmental Law Carroll Muffett explained, “for the first time identifies a discrete class of defendants” in the fight against climate change. This blows away any legitimacy of the falsification that if everyone is responsible, no one is. We know who is responsible: fossil fuel executives and their bought-and-paid-for political allies.

Climate litigation is emerging as a major strategy to recover costs from the fossil fuel billionaires who caused the climate crisis. As cities and counties across California step up in holding Exxon accountable, Xavier Becerra drags his feet.

Make no mistake, executives at companies like ExxonMobil and Chevron are trying every trick to fight these lawsuits, going so far as to point fingers and sue other fossil fuel companies. That’s like Philip Morris executives claiming it doesn’t matter that they lied about the dangers of smoking because they weren’t the only ones to do so.

In failing to take on Exxon’s climate deception, Xavier Becerra stands to undercut California’s vaunted leadership in global efforts to combat climate change. To build the fossil free world that works for all of us, we must use all of our tools to hold accountable those who have profited most from this destruction, in our legal system and in the court of public opinion.

With September’s Global Climate Action Summit in San Francisco on the horizon, AG Becerra must stand with the people he’s meant to represent and hold the likes of Exxon accountable.

Reposted with permission from our media associate 350.org.