Extreme Heat-Stressed Locations Could Increase by 80% 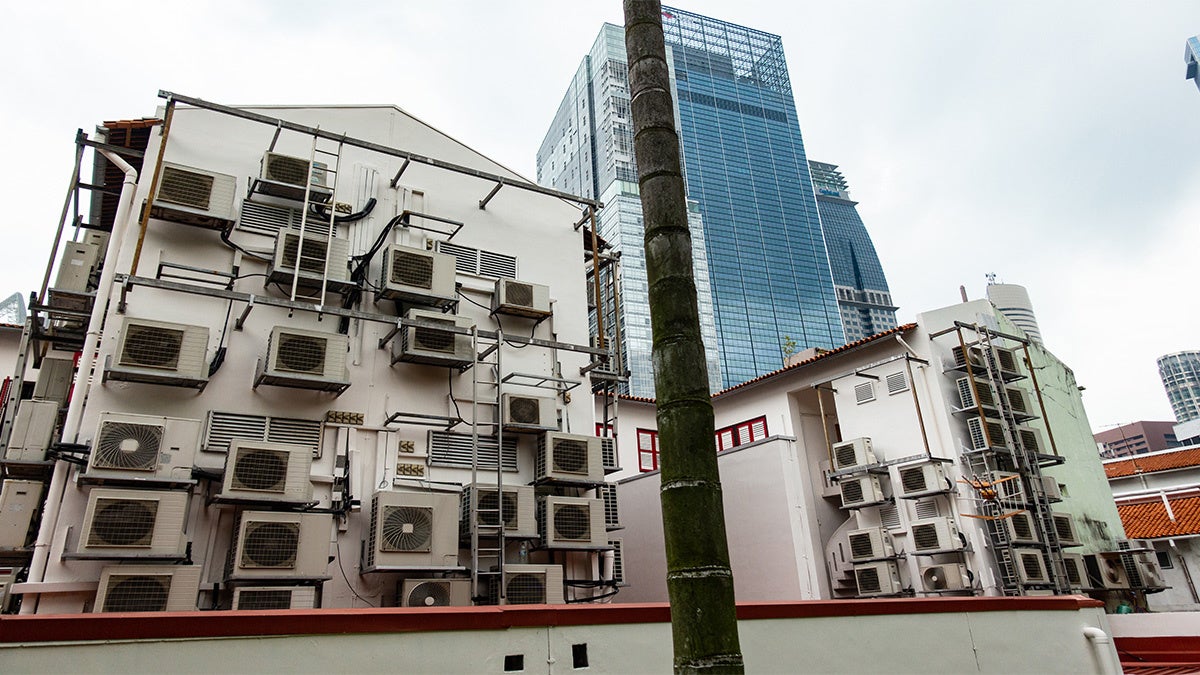 Air conditioners, like these in a residential and restaurant area of Singapore city, could put a massive strain on electricity grids during more intense heatwaves. Taro Hama @ e-kamakura / Moment / Getty Images

Scientists in the U.S. have added a new dimension to the growing hazard of extreme heat. As global average temperatures rise, so do the frequency, duration and intensity of heatwaves.

And that’s not the only factor to worry about. By mid-century, the area straddled by those bands of extreme heat could increase by 50% – if nations attempt seriously to contain climate change.

But if humans carry on burning fossil fuels in ever-greater quantities and felling more and more reaches of tropical forests, the most dangerous and extreme heatwaves in the future could cover areas 80% bigger than at present.

“As the physical size of these regions increases, more people will be exposed to heat stress,” warns Bradfield Lyon, associate research professor in the Climate Change Institute and School of Earth and Climate at the University of Maine.

Lyon, lead author of a new study in Environmental Research Letters, says: “Larger heatwaves would also increase electrical loads and peak energy demand on the electricity grid as more people and businesses turn on air conditioning as a response.”

By the century’s end, under some climate projections, three out of four people on the planet could be exposed to potentially dangerous heatwaves.

In some regions, the double punch of high heat and very high humidity could make conditions intolerable, and scientists in the U.S. recently counted 27 ways in which high temperatures could claim lives.

In principle, extremes of heat are already a threat not just to public health, but also to national economies. Researchers in Australia have already started to count the cost.

Until now, the interest has focused on the highest temperatures by day and by night, the number of days of sustained heat, and the frequency with which extremes might return.

But the new dimension – the increased area oppressed by extreme heat – presents unexpected challenges for city authorities and energy utilities.

“If you have a large contiguous heatwave over a highly populated area, it would be harder for that area to meet peak electric demand than it would be for several areas with smaller heatwaves that, when combined, are the same size,” said one of the report’s other authors, Anthony Barnston, chief forecaster at Columbia University’s International Research Institute for Climate and Society