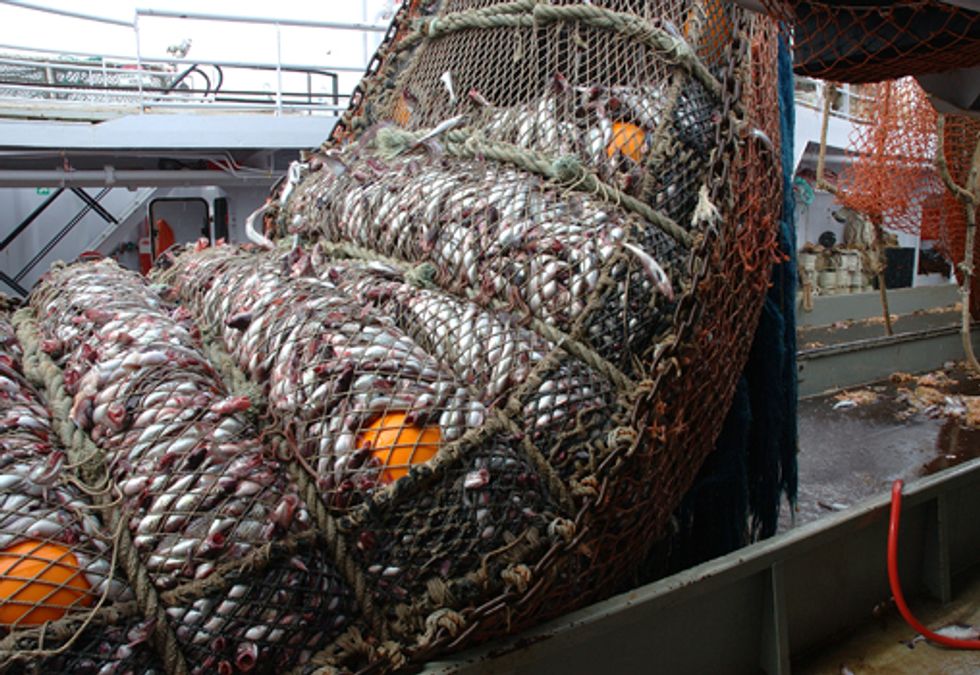 Fishing for herring, anchovy and other “forage fish” in general should be cut in half globally to account for their critical role as food for larger species, recommends an expert group of marine scientists in a report released on April 1. The Lenfest Forage Fish Task Force conducted the most comprehensive worldwide analysis of the science and management of forage fish populations to date. Its report, Little Fish, Big Impact: Managing a crucial link in ocean food webs, concluded that in most ecosystems at least twice as many of these species should be left in the ocean as conventional practice.

A thriving marine ecosystem relies on plenty of forage fish. These small schooling fish are a crucial link in ocean food webs because they eat tiny plants and animals, called plankton, and are preyed upon by animals such as penguins, whales, seals, puffins and dolphins. They are primary food sources for many commercially and recreationally valuable fish found around North America, such as salmon, tuna, striped bass and cod. The task force estimated that, globally, forage fish are twice as valuable in the water as in a net—contributing US$11.3 billion by serving as food for other commercially important fish. This is more than double the US$5.6 billion they generate as direct catch.

These species play a growing role in the everyday lives of industrialized nations. Their demand in recent decades has greatly increased for use as fish meal and fish oil to feed farmed fish, pigs and chickens that people consume on a regular basis. Fish oil is also used in nutritional supplements for humans.

“Traditionally we have been managing fisheries for forage species in a manner that cannot sustain the food webs, or some of the industries, they support,” says Dr. Ellen K. Pikitch of the Institute for Ocean Conservation Science at Stony Brook University, who convened and led the Lenfest Forage Fish Task Force. “As three-fourths of marine ecosystems in our study have predators highly dependent on forage fish, it is economically and biologically imperative that we develop smarter management for these small but significant species.”

Small schooling fish are an important part of the ecosystem on both coasts of North America. Many marketable species on the Pacific coast, such as salmon, lingcod, Pacific hake, Pacific halibut and spiny dogfish, feed on them. A large number of seabird species relies on them as well, and research shows that the breeding success of the federally endan­gered California least tern may depend on the availability of local anchovy populations. On the eastern seaboard, more menhaden are caught (by weight) than any other fish off the Atlantic coast. Taking out excessive amounts, however, means less food for tuna, bluefish and striped bass—as well as whales, dolphins and seabirds—and affects fisheries and tourism industries from Maine to Florida.

“Around the globe, we’ve seen how removing too many forage fish can significantly affect predators and people who rely on that system’s resources for their livelihoods,” said Dr. Edward D. Houde, a professor at the University of Maryland’s Center for Environmental Science and task force member. “We need to be more precautionary in how we manage forage fish in ecosystems that we know very little about.”

Made up of 13 preeminent scientists with expertise in a wide range of disciplines, the Lenfest Forage Fish Task Force was established to generate specific and practical advice to support better management of forage fish around the world. This group of experts, with support from the Lenfest Ocean Program, synthesized scientific research and other information about these species and conducted original simulation modeling to reach their conclusions.

“The Lenfest Forage Fish Task Force has provided guidance on how to prevent overfishing of these small prey species,” said Dr. P. Dee Boersma, professor and director of the Center for Penguins as Ocean Sentinels at the University of Washington and task force member. “Our hope is that fishery managers will put our recommendations into action to protect penguins, cod, whales and a whole host of other creatures that need them to survive.”