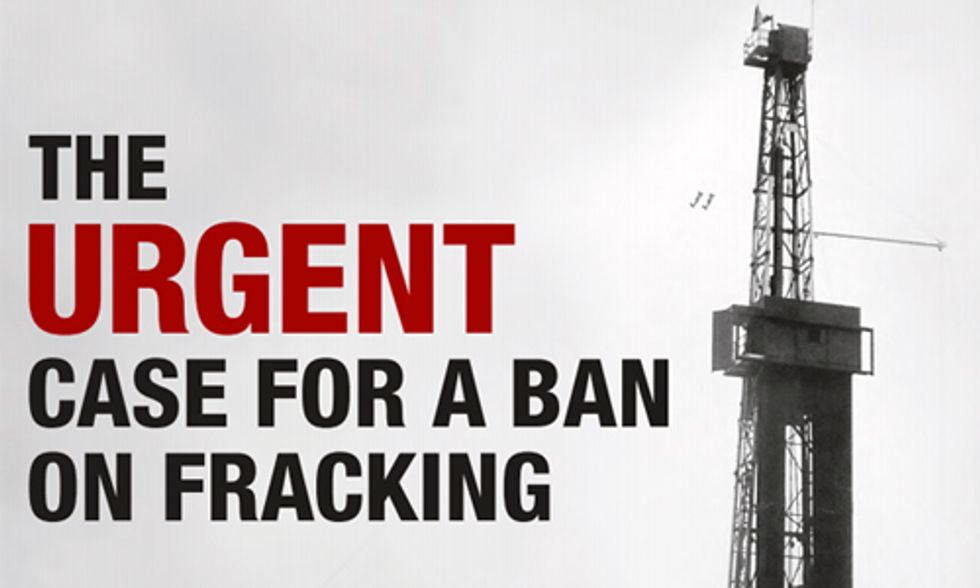 Americans Against Fracking, a coalition of more than 270 national and local groups opposed to hydraulic fracturing, held a media teleconference today to call on President Obama to ban fracking in the lead up to the People's Climate March.

The press call highlighted a new report by Food & Water Watch, The Urgent Case for a Ban on Fracking, providing a comprehensive compilation of research on the harmful effects of fracking. It makes the case that the huge amount of methane released during the fracking process traps 87 times more heat pound for pound than carbon dioxide over a 20-year period.

“Gas wells are like chimneys in the Earth and what they leak goes straight into our atmosphere," said Sandra Steingraber, science advisor to Americans Against Fracking, and national expert on climate change and scientist at Ithaca college. "Fracked gas wells leak heat-trapping methane into the atmosphere which cripples any chance we have to combat climate change—unless we halt fracking. We’ve underappreciated just how powerful a greenhouse gas methane is. That’s why we’re calling methane the new carbon dioxide.”

Actor and anti-fracking activist Mark Ruffalo joined a group of scientists and environmental leaders to launch the #DontFrackOurClimate campaign. The social media campaign is timed to hit ahead of the People's Climate March on Sunday and UN Climate Summit on Tuesday in New York City. The goal is to focus attention on methane as the new carbon dioxide.

“Climate change is the challenge of our lifetimes, and millions of lives and future generations depend on us meeting that challenge,” said Ruffalo. “By banning fracking, we can move forward with clean energy, the power of the 21st century, and create twice the amount of jobs in the renewable energy sector. We already have the technology; we can make this change today. We need the will and the political leadership."

“The industry has successfully spun fracking as good for the climate, but the science shows it’s anything but,” said Food & Water Watch executive director Wenonah Hauter. “If President Obama wants to be a leader in curbing the global climate crisis, he can’t continue to ignore the climate-related effects of methane from fracked gas. The science  is now clear that natural gas dependence causes much more global warming than previously thought.”

Food & Water Watch initially called for a ban on fracking in 2011, arguing that it was unsafe. "Since then, scientists have published more than 150 studies that clarify what is known, and what remains unknown, about the risks and harms that fracking brings to communities—the water pollution, air pollution, climate pollution and earthquakes, as well as other drivers of economic and public health problems," says the report.

“Everything that comes before and after fracking is an opportunity for methane to be emitted," said Tony Ingraffea, scientist and engineer at Cornell University. "There is far more methane getting into the atmosphere than we thought and the impact of methane on climate change is much higher than we thought. We only have two decades before we reach our tipping point. If we don’t halt the production of shale gas, and slow down the release of unburned methane, we’ll be committing climate suicide.”

The Giant Methane Monster Is Lurking