Here’s What America Would Look Like Without the EPA 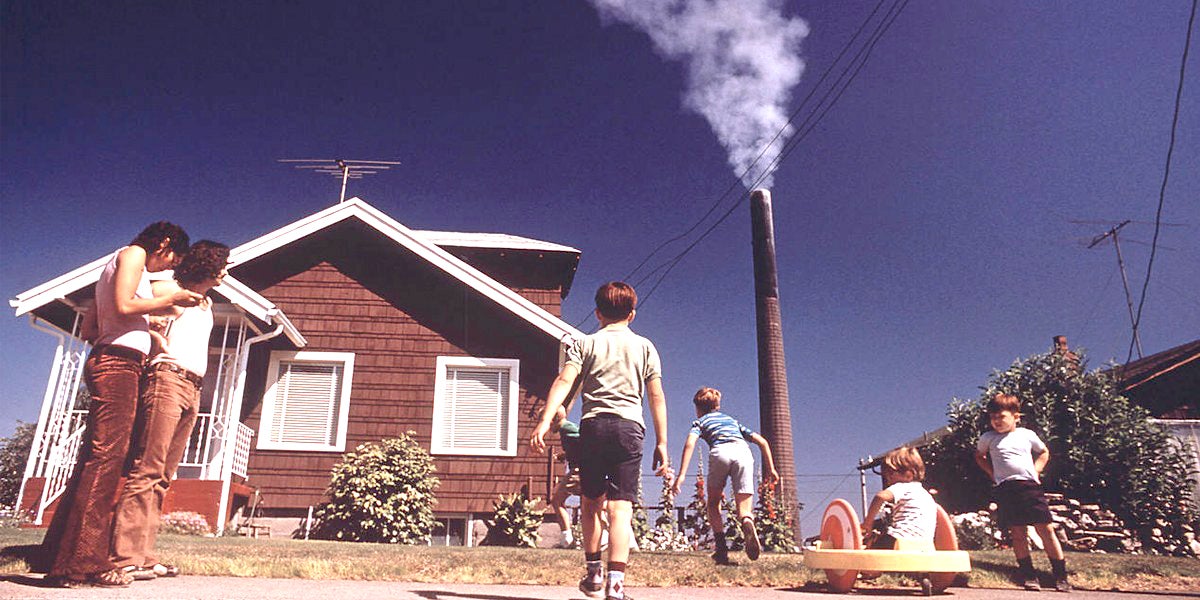 “Restoring nature to its natural state is a cause beyond party and beyond factions,” said Richard Nixon, the founder of the U.S. Environmental Protection Agency (EPA), in his 1970 State of the Union speech.

If only. While there was clearly a time when support for environmental regulations transcended politics, the GOP’s broad support for EPA antagonist and Oklahoma attorney general Scott Pruitt to head the agency he so maligns tells us that day has passed.

A collective memory lapse seems to have descended on lawmakers who seek to dismantle an agency that has transformed American life for the better. Since the EPA’s founding in 1970, concentrations of common air pollutants, like sulfur dioxide, have dropped as much as 67 percent. The EPA helped mitigate catastrophes like acid rain, leaded gasoline and DDT. The agency bravely classified secondhand smoke as a known carcinogen in 1993, paving the way for successful litigation against the tobacco industry and an incredible reduction in U.S. smoking rates.

Perhaps the EPA has been too successful for its own good. In the same way that vaccines have given parents the luxury of forgetting what measles and whooping cough were like, the EPA has nearly wiped out the national memory of the contaminated environment of the 1960s. But things were so bad then that support for creating the agency and our major environmental statutes was virtually unanimous—nearly everyone recognized the need for an environmental regulator.

“There were debates about the best approach to deal with the problem, but opposition to the EPA was pretty minimal in the beginning,” remembers A. James Barnes, who was with the agency at its founding and served as deputy administrator from 1985 to 1988. “Most legislators got themselves personally involved in how to improve the environment.”

As we embark on a terrifying new period at the EPA, under a president who called the agency “a disgrace” and promised to abolish it, it’s worth looking back at the way we were before the U.S. Environmental Protection Agency came to our rescue.

Disasters Were the Norm

If you ask people of a certain age about the environmental problems of the 1960s, many describe a series of discrete disasters: the Cuyahoga River fire, the New York City Thanksgiving smog, the Santa Barbara oil spill. Those incidents were shocking indeed, but they weren’t one-offs. In most cases they were merely the most salient in a series of increasingly grave problems of the same kind.

Take the New York City smog. “The smog” is New York shorthand for the choking, three-day air pollution event that smothered the city over Thanksgiving 1966. That weekend, the city experienced a heat inversion—a stationary layer of warm air that prevented the normal upward circulation of warm air from the ground. As a result, low-lying pollution simply hung over the city. 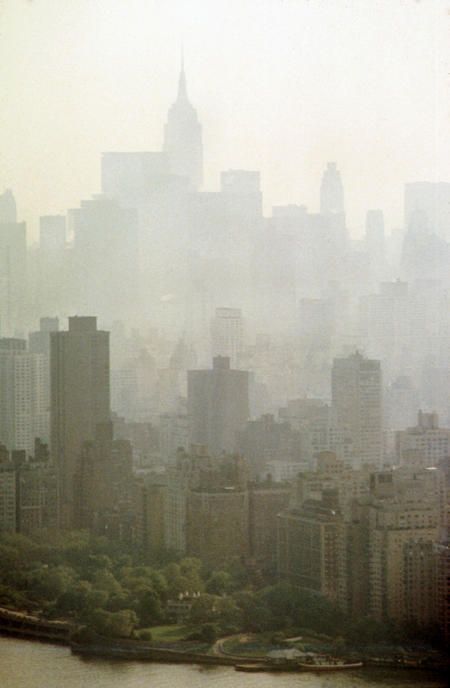 “I was a student at Columbia Law School during the 1966 episode,” said Natural Resources Defense Council (NRDC) attorney David Hawkins. “It was frightening, but while that is the best-known event, heavy pollution was an everyday fact of life those days. It was one of the things that motivated me to get a job at NRDC soon after I graduated.”

As Hawkins points out, “the smog” wasn’t really new. Thirteen years earlier, for six terrible days, a similar heat inversion spiked the sulfur dioxide content of New York’s air from a tolerable 40 parts per billion to 860 parts per billion. (The current legal limit is 75 parts per billion.) At the time, American city dwellers hadn’t yet settled on the term smog to describe the dark curtain of polluted air that was beginning to descend on them. Many newspapers referred to the disaster as “the smaze” and every day it accelerated the death of 25 to 30 people. Yet another multi-day smog event blanketed Gotham in 1963.

And New York was far from alone. Air pollution hung over many major American cities and some not-so-major. In Donora, Pennsylvania, a former mill town in the state’s steel country, 20 people died during a 1948 air pollution event that was one of the worst in U.S. history. Today, the town maintains a Smog Museum dedicated to reminding people of the tragedy that eventually gave rise to the Clean Air Act. 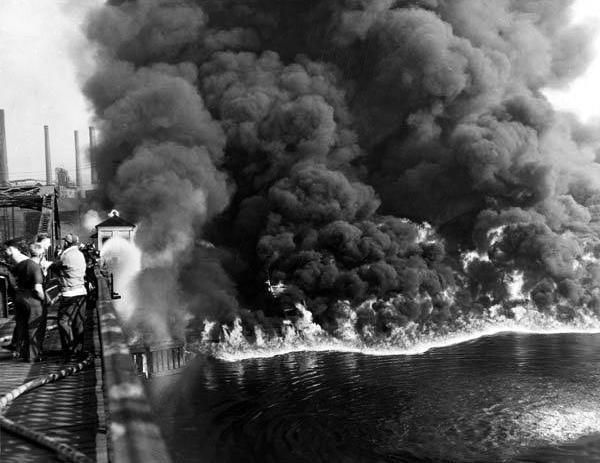 Similarly, the Cuyahoga River fire typically refers to an incident that took place in Cleveland on June 22, 1969, when sparks from a train landed on oil-soaked debris floating on the river’s surface, igniting it. Flames reached five stories in height as the river burned for about 30 minutes.

While it was, inarguably, a terrifying incident, the Cuyahoga River had caught fire at least a dozen other times between the late 19th and mid-20th centuries. In fact, the Time magazine photo of the fire that captured so much public attention in 1969 was actually taken during a previous incident in 1952. And many other American rivers were sufficiently polluted to go up in flames around the same period.

The Santa Barbara oil spill is the same story again. On Jan. 28, 1969, a blowout in an offshore well released thousands of barrels of oil into the ocean. We still don’t know exactly how much oil leaked in the infamous accident, but we do know that there were plenty of similar-size spills in the years prior. The previous spring, a tanker ran aground in San Juan, Puerto Rico, spilling thousands of barrels of oil. The year before that, the tanker R.C. Stoner grounded on U.S.-managed Wake Island in the Pacific, spilling thousands of barrels of oil and destroying a coral reef. The list goes on. Santa Barbara wasn’t an anomaly—it was a regularly occurring event in a world with little environmental regulation and even less spill-response technology.

Richard Nixon’s role in the creation of the U.S. Environmental Protection Agency is complicated. It wasn’t his idea and some believe he founded the EPA with the hope that he could control its administrators. But there can be little doubt that even Nixon—a Republican to his very bones—understood the need for stiffer environmental regulations. Almost all Republicans of his generation did. In that 1970 State of the Union speech, Nixon called environmental preservation a “common cause of all the people of this country.” He went on: “It is a cause of particular concern to young Americans, because they more than we will reap the grim consequences of our failure to act on programs which are needed now if we are to prevent disaster later. Clean air, clean water, open spaces—these should once again be the birthright of every American.” 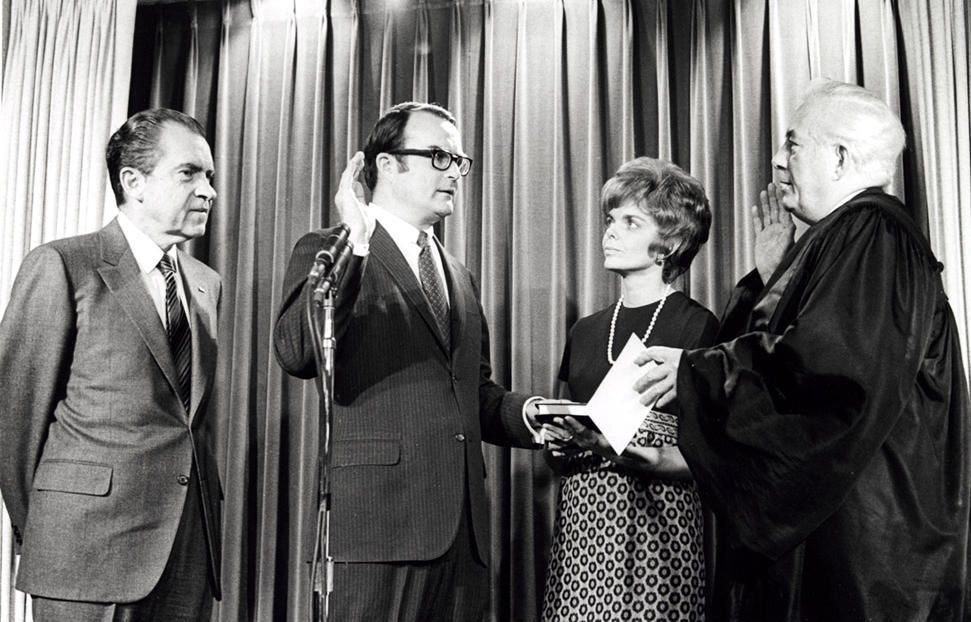 What’s more, Nixon understood that supporting our environment would have financial costs. But he viewed those costs as justifiable, even obligatory. He continued:

“We still think of air as free. But clean air is not free and neither is clean water. The price tag on pollution control is high. Through our years of past carelessness we incurred a debt to nature and now that debt is being called. The program I shall propose to Congress will be the most comprehensive and costly program in this field in America’s history.”

A year earlier, United Nations Secretary General U Thant had told the General Assembly that the world had just 10 years left to fix the environment before it became unfixable and he’d identified the U.S. as a primary contributor to the problem.

The public overwhelmingly agreed with these mandates. On the first Earth Day, in 1970, New York City closed 40 blocks of Fifth Avenue as 100,000 people turned out to march. (Some 20 million Americans demonstrated across the country). Congress canceled business, as its members felt a responsibility to stand with their constituents and vowed to clean up the mess they had made.

The EPA and the laws it implemented changed everything. Although we now drive four times as many miles as we did in 1970, smog no longer chokes our cities as it used to, thanks to a more than 90 percent decrease in emissions per mile. The average American kid is growing up with blood lead levels one-tenth of what her grandparents had as children. And she’s far less likely to be exposed to toxic chemicals like asbestos.

The proportion of American homes served by stringent sewage treatment systems has more than doubled since EPA’s founding. Municipal solid waste recycling has grown fivefold. More than 18 million acres of land contaminated by hazardous waste have been cleaned up. The rate of wetlands loss has decreased by 96 percent.

Nostalgia is a dangerous instinct. It’s easy to remember the historic moments, but the day-to-day problems fade. The America that existed in the 1960s, in the years before the EPA’s founding, was dirty, dark and dangerous. The EPA saved us. Let’s return the favor now.