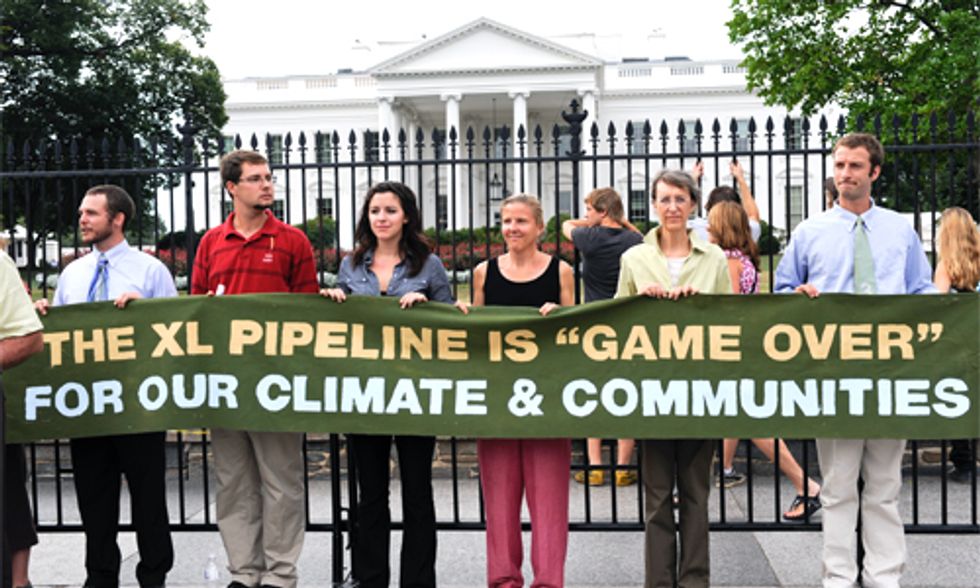 The U.S. Environmental Protection Agency (EPA) drove what may prove to be the final nail in the coffin for the proposed Keystone XL tar sands pipeline in comments released today, linking the project to an expansion of the tar sands and a significant increase in greenhouse gas emissions.

As the Administration concludes its review of Keystone XL, the U.S. EPA's critique of the proposed tar sands pipeline exposes the project's impact on climate—an issue that President Obama said would be a threshold issue in deciding whether to allow the project to move forward. The EPA's letter highlights the Department of State's conclusion that at prices between $65 to $75 a barrel, "the higher transportation costs of shipment by rail 'could have a substantial impact on oil sands production levels—possibly in excess of the capacity of the proposed project.'" Observing that the development of tar sands represents a significant increase in greenhouse gas emissions, the EPA's comments lay the basis for Keystone XL's rejection as failing the President's climate test.

In light of the EPA's comments today, it is worth revisiting the terms of President Obama's climate test for the embattled tar sands pipeline:

"But I do want to be clear. Allowing the Keystone pipeline to be built requires finding that doing so would be in our nation's interests. And our national interest will be served only if this project does not significantly exacerbate the problem of carbon pollution."

The EPA's comments lay a clear framework for Keystone XL's rejection on the basis of this test. In addition to highlighting the likelihood that Keystone XL would have a substantial impact on tar sands expansion:

As the Administration enters the final stages of the National Interest Determination process for Keystone XL, the EPA urged decision-makers to give more weight to Department of State's low oil price scenario where "construction of the pipeline is projected to change the economics of oil sands development and result in increased oil sands production, and the accompanying greenhouse gas emissions, over what would otherwise occur."

EPA's assessment of Keystone XL underscores a fact that has become increasingly clear—the proposed tar sands would enable expansion of tar sands development which in turn will lead to a significant increase in greenhouse gas emissions. It is now clear that Keystone XL fails the President's climate test and should be rejected.