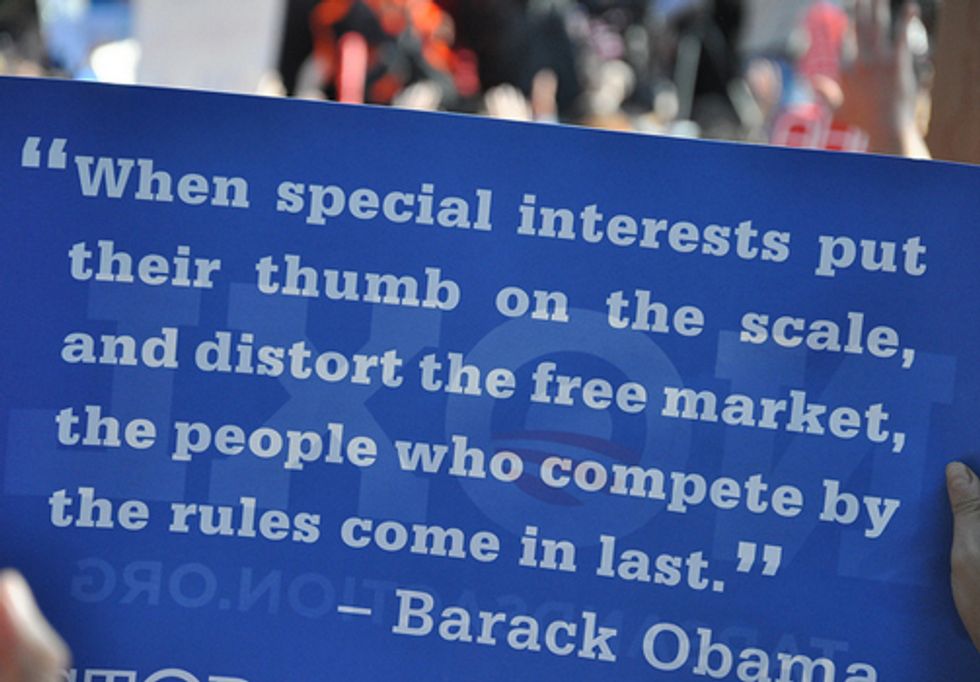 Around noon, as the organizers of the Nov. 6 encirclement of the White House to stop the tar sands pipeline were setting up, someone said, “the flag is flying over the White House, that means President Obama is home.” But a U.S. Park Police officer standing next to me said, “it’s not true, sorry to disappoint, but he’s not home.”

But lo and behold, at 5:15 p.m., as the light was rapidly fading and a beautiful three-quarter moon appeared in the sky over Lafayette Park, when Bill McKibben was wrapping up, speaking about the wonder and power of the day’s event and this movement, a motorcade appeared at the top of Lafayette Park. Someone said, “It’s President Obama,” and Bill proceeded to lead the thousands of people in a chant of, “Yes We Can Stop the Pipeline” as hundreds streamed towards the cars with their flashing red lights. If, indeed, it was Obama, there's no way he didn’t hear us.

This was just one of the amazing things that happened today.

There was the turnout, ten thousand plus people attended the rally.

The encirclement worked. And there were probably enough people that if there was the time and resources to do so there could have been two-deep or even three-deep all the way around the White House. Instead, some places had a single line of people, others five-deep. There was a powerful spirit of hope and determination that was palpable as I walked the circle doing a numbers count.

There were large numbers of youth in attendance, perhaps half of the total being under 30 years old. Students came on buses from as far away as Missouri and Florida.

There was the 100 yards-or-so-long “pipeline” which was carried by hundreds up and down Pennsylvania Ave., chanting as they marched.

There were the connections made by many of the speakers at the rally, between the no pipeline movement and the movements against fracking, deepwater oil drilling and mountaintop removal.

Actor Marc Ruffalo gave his two-minute speech without using the electronic mike. He called out “mic check,” thousands repeated it, and he spoke in the Occupy mode effectively and powerfully.

This rally was in no way a culminating event. Just the opposite. At a pre-rally event Saturday, Nov. 5, attended by hundreds of people, the planning for actions and visits over the next few weeks to Obama for America reelection campaign offices was underway. A large demonstration is being organized at the national Obama reelection office on Nov. 16 in Chicago, Illinois at noon.

Bill McKibben was clearly impressed by what took place today and for the first time since he and the other organizers publicly initiated this movement more than four months ago, he said, as he closed the post-encirclement second rally, “we can win this fight.” Yes, si se puede, yes we can stop the Keystone XL pipeline. Yes, we can transform U.S. energy policy and create a new world.

Nov. 6 at the White House is the latest sign that a powerful, loving and hopeful new beginning is here and sinking deeper roots among the people of the U.S.

To view photos from the Nov. 6 event and other Keystone XL events, click here.