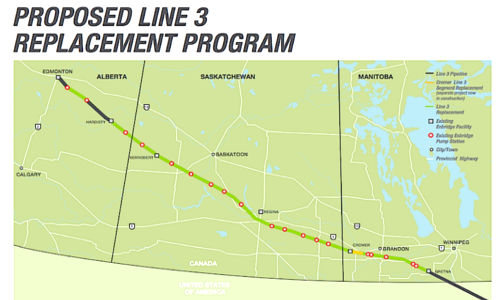 In its largest capital project in history, Enbridge plans to do what Transcanada so far can’t—ship more than half a million barrels of heavy oil across the U.S. border without President Barack Obama’s direct approval. 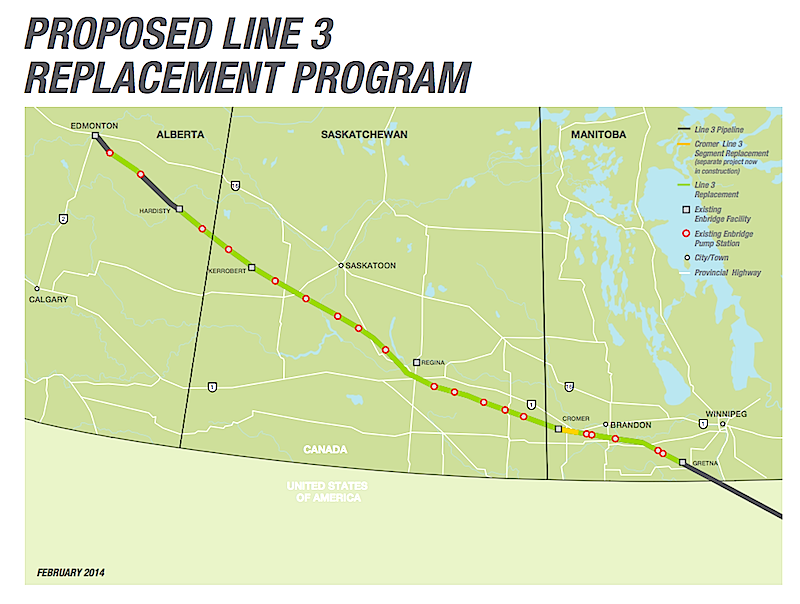 Late Monday evening, Enbridge announced plans for its largest capital project in history— a $7 billion replacement of its Line 3 pipeline.

The existing Line 3 pipeline is part of Enbridge’s extensive Mainline system. The 34-inch pipe was installed in 1968 and currently carries light oil 1,660 km from Edmonton, Alberta, to Superior, WI.

While the Line 3 pipeline currently has a maximum shipping capacity of 390,000 barrels of light crude oil per day, pumping stations along the line have a much larger capacity (and can accommodate heavier oils). Enbridge plans to take advantage of this. Under the company’s replacement plans, the new Line 3 pipeline will be widened by two inches, and built “using the latest available high-strength steel and coating technology.” By the time it goes into service in 2017, Line 3 will ship 760,000 barrels of oil across the border every day, nearly double what it currently moves.

At the same time, the new Line 3 will be designated as “mixed service,” allowing it to carry a variety of different types of oil from heavy to light. Speaking on a conference call with investors and media this morning, Enbridge CEO Al Monaco said “my lean would be more towards the heavier side, but it will carry both.”

Line 3 will continue to operate at full current capacity during the construction period. All construction is expected to occur within the existing pipeline corridor. 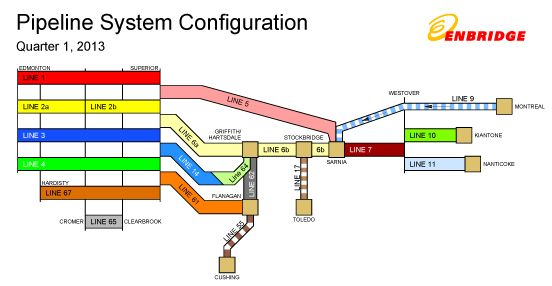 No Presidential Permit Required (Because it Already Has One)

Unlike the Keystone XL pipeline or its predecessor Line 67 (also known by its more jovial name “Alberta Clipper“), this project is classified as “replacement” or “maintenance,” meaning it operates under an existing presidential permit and does not require a new one. Enbridge proponents made a point of repeatedly affirming this during Tuesday’s call with investors and media.

Construction will be managed by two separate companies. The Edmonton to Hardisty segment and the Hardisty, Alberta, to Gretna, Manitoba, segments will be managed by Enbridge’s wholly-owned Canadian subsidiary, Enbridge Pipelines Inc. Enbridge Energy Partners, L.P. will take responsibility for approvals and construction of the segment between Neche, ND, and Superior, WI.

Notably, both projects omit discussion of the tiny—but crucial—three km pipeline segment that crosses the Canada/U.S. border and links Gretna, Manitoba, to Neche, ND. On the U.S. webpage for the Line 3 project, Enbridge states:

Segments of Line 3 from the Canadian border to Neche, ND, and near the Minnesota/Wisconsin border to the Superior terminal are being replaced under separate segment replacement projects.

The Canadian webpage has a similar message.

At the moment, it is not clear what those replacement projects are, or what stage of approval they are in. Enbridge did not return a call to clarify details.

With its announcement, the Line 3 replacement joins three other large-scale expansion projects by Enbridge in varying stages of development or approval.

Should all four of these projects go ahead, they will collectively increase Enbridge’s daily shipping volume by approximately 1.5 million barrels per day, or the equivalent of nearly two Keystone XL pipelines. The Keystone XL pipeline is expected to transport 830,000 bpd.

Addendum: Here’s the math behind the projected Enbridge shipping volume.